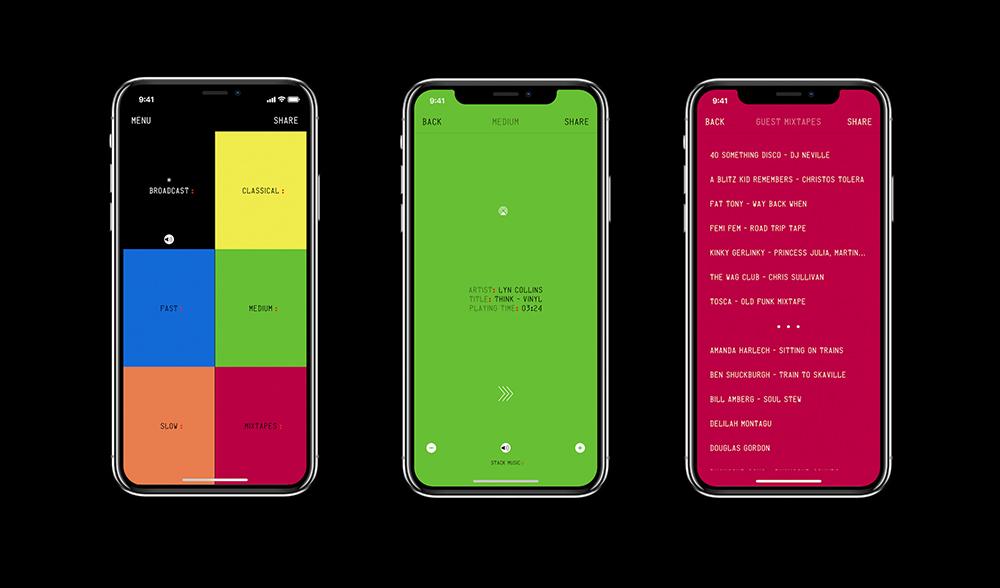 Welcome To The Radio Revolution

Introducing Stack Radio App, the DJ in your pocket and exclusive club everyone wants a membership to. A simple radio app, Stack Radio App is designed with no ads, no talking, no interruptions, just great music, specially selected by the gatekeepers of the music world.

Purveyors of quality, Stack Radio App was set up by Kiss FM founder Tosca Jackson and art world veteran and curator Max Wigram in 2018 to remove the anxiety of music listening. Investing time building a trusted circle of tastemakers, the pair set about intricately building mixtapes for fans of all music without the time to wade through the ocean of songs available. Like being in your favourite club, or that subscription to the hottest record label, Stack Radio App creates the most enjoyable music experience one track at a time, from back-in-the-day classics to essential new cuts.

Aesthetically stunning, with weekly updates and an unbelievably simple setup, Stack Radio App has a selection of carefully considered mixtapes from some of the most influential and connected people in music, to take you on a voyage through sound. From legendary designer Pam Hogg to actor Russell Tovey and DJ to the stars Fat Tony to Texas front-women Sharleen Spiteri, to name just a few, each providing a glimpse into their musical world or taking you back to the dance floor. A one stop music shop, you can also sit back and select one of three simple choices, ‘Slow’, Medium’ or ‘Fast’, allowing Stack Radio App to create the perfect choices from their deep wealth of musical knowledge. It’s simply all the best bits of radio, with all the best DJs.

Speaking of the app Tosca Jackson said “Streaming services opened up a whole new world of music for us, but choice became the issue -  a huge library of songs in our pockets, but without any filter. Stack Radio App is a simple filter, a gateway to great curated music. If the other streaming services were holiday camps, we set out to be the boutique hotel.”

“Choice can be overwhelming so the idea of an app that selected the best tracks for me sounded perfect” Max Wigram said on creating Stack Radio App. “Something that was beautiful and simply designed, an app I could stick on and then relax. Something of truly fantastic quality.”

Already finding champions across the music world and with a small fee of £20 for a 12 month subscription, the app is affordable access to the world’s most exclusive club. With the same love and passion for music, Stack Radio App plays differently. Join the radio revolution!

A founder of one of the UK’s most loved radio stations, KISS FM, Tosca Jackson has had an illustrious career in the music industry. As well as working in radio as a DJ on Solar Radio and starting the celebrated station Mi-Soul Radio, Tosca has also consulted for Sony and BMG and worked as an artist manager for Modest Management. Following his time at Modest Management, he started Pumpkin and Babylon music, managing a roster of songwriters to supply bespoke music for TV, Film and events. Since its inception they have provided the music for many TV Shows including Billy Connolly’s ‘Across America’ series, Micky Flanagan’s Sky series and ring music for Anthony Joshua.

Throughout his career art world veteren Max Wigram has worked as the contemporary curator at the Royal Academy, where he curated the seminal Apocalypse exhibition in 2000 with Sir Norman Rosenthal, started the Independent Art Space in 1994 and was the Art Advisor to the Thyssen Collection. He ran his acclaimed gallery, Max Wigram Gallery, from 2005-2017 in London’s Mayfair representing artists such as John Giorno and Marine Huggonie. Today, as well as creating Stack Radio App, Max works as an Independent Investor.

Having the fun of bingo without leaving the house