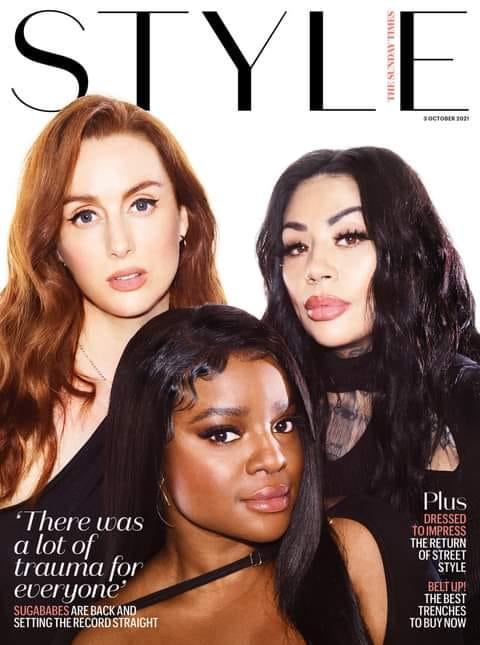 Today I am looking into the career of British pop super girl group The Sugababes. In 1998 Sugababes was founded by Former All Saints manager Ron Tom and Sarah Stennett.

Mutya Buena and Siobhan Donaghy were signed on as solo artists but decided to work together after performing at the same showcase.

One day Mutya invited her schoolfriend Keisha Buchanan to the studio to watch but they decided to work as a trio and were signed to London Records.

In September 2000 Sugababes released their debut single Overload which went in at Number 6 in the UK and the top 3 in other countries.

On Novemebr 27th 2000 their debut album One Touch was released with three more singles New Year, Run For Cover and Soul Sound. One Touch peaked at Number 26 in the UK albums chart and earned them a Gold Disc.

In the Summer of 2001 during a promotional tour in Japan, Siobhan left the Sugababes due to conflicts within the group but a new member was needed - cue in Ex Atomic Kitten member Heidi Range. But after she joined the band Sugababes were dropped from London Records.

In 2002 after signing with Island Records, Sugababes started to work on their second album (first with Heidi) and on 22 April of the same year, they released a cover of the Adina Howard hit Freak Like Me. Their version of the song was the first number one on UK singles chart for the girls.

The Summer of 2002 was a busy time for them as they were promoting the second single Round Round as that gave the girls their second number one in the UK and releasing their classic album Angels with Dirty faces which went in the UK album charts at number three and racked 3 times platinum discs.

In the winter of 2002 a double A-side single was released as Stronger/Angels with dirty faces which charted at number 7 In the UK.

The group won their first and only Brit Award as best British dance act.

Last single of the album was Shape that came out in March 2003 (which contains elements of Sting’s Shape of my Heart) went in at number 11.

October 13 2003 Sugababes released their new single Hole in the Head and gave them their third UK Number one in the Singles chart and it was number one on the US Dance club chart.

On the 27th of the same month, their third album Three was released  which coincidently went to number three in the UK Album charts.

Three more singles followed Too Lost in You which was featured in Love Actually, In the Middle and Caught in a Moment and this was thier first album to feature a solo song from each member.

2004 was the year they went on tour with the album and previous 2 after a break from touring went into the studio to record their fourth album during which time Mutya was pregnant with her first child.

On 23rd March 2005 Mutya gave birth to daughter Thailia Maya and in September of the same year Sugababes released their fourth Number one single Push The Button and it went platinum.

October 10 2005 Taller In more ways their fourth album was released into the charts and gave them their first number one album and are the only band to still have a single and album both at number one in the UK charts after Atomic Kitten and Spice Girls.

Christmas of the same year the sophomore single of the album Ugly was written about people who have an insecurity about themselves and often one person gets a kick calling it out which is a mean thing to do.

Ugly went in the charts at number 3 but was the last single to feature Mutya as on 21st december 2005 Mutya left the band and another lady was needed along came Amelle Berrebah who was met by Sugababes managers couple of years before.

Amelle was thrown into the deep end of Sugababes schedule as touring for Taller in more ways was about to begin.

2006 was the busiest year for the group re releasing Taller in more ways with Amelle and two more singles came off the re release Red dress and Follow me home. and releasing a Greatest hits album titled Overloaded the singles collection which included one single called easy  which was number 8 in the UK

September 2007 Sugababes released their last number one single About you now which marked a new image and first proper studio album to feature Amelle as on October 1 2007 their fith studio Change was released and scored them a number one album in the UK. In France change was released as a greatest hits compelation.

A tour of the album followed and included a date Swindon’s Oasis Leisiure Centre during the same time the third and final single Denial was released off the Album this single peaked at number 15 in the UK.

In October 2008 Their sixth album Catfights and Spotlights and the last too feature original founding member Keisha Buchanan was released which spawned two singles Girls which went in the top 3 and No Can Do which was 23 in the UK. Catfights and spotlights went in at number 8 in the UK album charts.

In March 2009  the group announced they were in recording of their seventh album and released a single called Get Sexy which was number 2 in the UK being the last single to feature Keisha.

In Septemeber 2009 Keisha left the Sugababes though it wasnt her decision to leave. 2009s UK Eurovision reperesentive Jade Ewen was recuited to join and re record their seventh Album November of the same year About a Girl was released and first to feature Jade but went in the charts at number 8.

In Febuary 2010 the last single Wear My Kiss was released and went to number 7 in the UK.

5 March 2010 their seventh album Sweet 7 was released first and only to feature Jade but reached the charts at number 14 in the UK and promotion stopped after release and started to work on album number 8.

Freedom was the last single with line 4.0 after failing to reach the charts in 2011 work on the album stopped and split up without announcement.

Us fans thought Sugababes were over forever but a beacon of hope came in 2012 when The original line up reunited as MKS as suagabes was still being used and released a single called flatline in 2013 and album was in the works for 2014. Sadly the album was never released after some new material leaked online.

2019 they were back as Sugababes beacuse they finally got the rights back to use the name and released a cover of Flowers and performed on The Graham Norton show. 2020 Sugababes had plans re release One Touch but due to The Covid 19 pandemic plans were put on hold.

But in 2021 Suagababes re released One Touch on CD and on two coloured vinyl a gold one and a tri colour vinyl and went in at number 18.

Could there be another album on the cards? I hope so as Sugababes still hold a place in pop history and us fans would like new material.

The 4 Main Benefits of a Franchise Opportunity