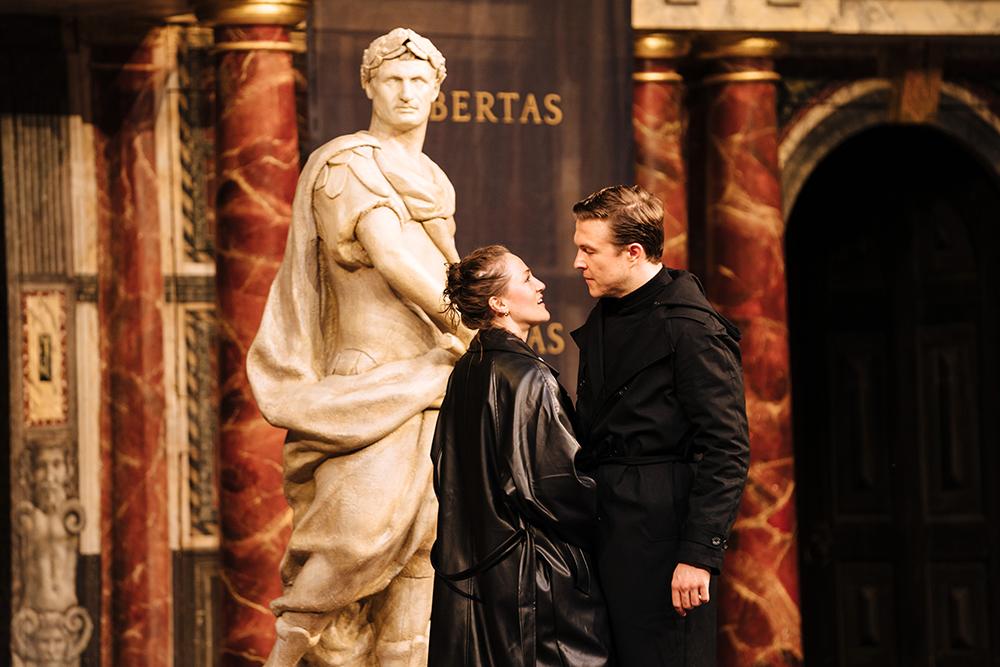 “When Cassius and Brutus decide Rome’s leader Julius Caesar poses a political threat to their beloved country, there’s only one solution…”

Directed by award-winning director, Diane Page, winner of the 2021 JMK Award, this new production of Julius Caesar aims to bring Shakespeare’s brutal tale of ambition, incursion, and revolution to life with startling relevance to modern day.

Director Diane Page says: “I’m so excited to bring my production of Julius Caesar straight from the Globe Theatre in London to tour across the UK. These past few years have revealed more than ever how betrayal, division, and cunning rhetoric are not just traits belonging to Ancient Rome. Shakespeare’s Julius Caesar will be on the road this summer and I look forward to visiting these fantastic venues.”

Diane Page won the JMK Award in 2021 for Statements after an Arrest under the Immorality Act (Orange Tree Theatre).

She returns to the Globe after assistant directing Bartholomew Fair, 2019. Her previous directing work includes Out West, In Love and Loyalty (Lyric Hammersmith) and Ghost Stories (Associate Director West End and Tour). Julius Caesar is designed by Khadija Raza with Jesse Haughton-Shaw as Dramaturg and Indiana Lown Collins as Assistant Director.

Anna Crichlow will play Brutus. Anna recently performed at Shakespeare’s Globe in the 2021 Globe on Tour productions of As You Like It, The Tempest, and A Midsummer Night’s Dream. Other theatre credits include: The Last Noel (Attic Theatre Company / Arts at the Old Fire Station), The Worst Witch (Royal & Derngate), Confidence (Southwark Playhouse), Common (National Theatre), and Pride & Prejudice (Regents Park Open Air Theatre).

Amie Francis will play Calpurnia. Amie’s previous theatre credits include: Paradise (National Theatre). Screen credits include: Casualty, The Hour (BBC), Roadkill (The Forge Entertainment), and Save Me Too (World Productions).

Cash Holland will play Portia / Murellus. Cash has previously performed in Homos or Everyone in America (Finborough Theatre). Screen and Radio credits include: Out of her Mind (Stolen Pictures / BBC 2) and Between Two Places (Dora Productions / BBC Radio 4).

Dickon Tyrrell will play Julius Caesar. Dickon is one of the Globe’s Higher Education Consultants and a fellow of the RSA. Previous work for Shakespeare’s Globe includes: Macbeth (2020), The Merry Wives of Windsor, Bartholomew Fair (2019), Twelfth Night (2016), Measure for Measure, Othello, The Oresteia (2015), Julius Caesar, The Duchess of Malfi, The Knight of the Burning Pestle (2014), King Lear, Romeo and Juliet (2013), Hamlet (2012), Anne Boleyn, and Henry VIII (2010). Other theatre credits include: Anatomy of a Suicide, Harvest (The Royal Court), Labour of Love (Noel Coward Theatre), and The Merchant of Venice, Henry IV Parts 1 and 2, Richard II, Richard III, Julius Caesar, The Devil is an Ass (RSC).

Tickets for this production of Julius Caesar start at £10 and are available from the Oxford Playhouse Box Office on 01865 305 305, or can be booked online at www.oxfordplayhouse.com

Fans of Carole King in for a treat in Swindon