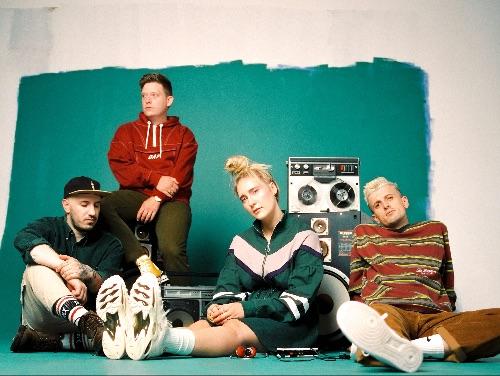 Fickle Friends have announced their upcoming EP ‘Weird Years (Season 1)’, which will be released on January 15th via Cooking Vinyl. The announcement of this release also sees the band share the lead single ‘What A Time’.

“This EP is the weird story of the last three years of our lives,” says frontwoman Natti Shiner. “It covers everything from waking up and feeling horrendous, to being stuck in lockdown and feeling anxious, to being heartbroken. There’s a lot in there that I think people will relate to.”

With over 150 million streams across tracks, 2020 was set to be another big year for Fickle Friends. They had already released two new tracks, ‘Pretty Great’ and ‘Eats Me Up’, but as they moved towards the release of their second album lockdown struck. All plans had to be rethought. They felt that releasing a full album that they couldn’t tour wouldn’t work, so Shiner and band co-leader Jack Wilson had a rethink. They found inspiration in the television format, and the ‘Weird Years’ evolved with Series 1 coming on 15th January and more instalments to follow next year.

The first single ‘What A Time’ is the perfect introduction to the new project, inspired by 80s synth-pop, it merges alt-pop, dance and indie into an uplifting rush of energy which feels somewhere between Mura Masa and the Fickle Friends that fans have come to love. That buoyant vibe contrasts the darkness of its lyrics, with the hook “what a time to be alive” inspired by the ironic Covid-era catchphrase.

“‘What A Time’ is an anthem for escapism,” Shiner explains. “With everything that has happened over the last six months, everyone has needed a little time away from the outside world. It’s felt like the world is in a downwards spiral, but you need to take some time out for yourself. Shut your bedroom door, turn your music up and dance around the room.”

‘What A Time’ is released alongside a video that the band filmed and edited themselves - one of the many creative aspects that they’ve learned during lockdown. Armed with some cameras, they headed into Brighton after dark to capture the feeling of being outside for the first time in months. The result is a video which reflects our shared experiences of recent months - the surreal feeling of stepping back into daily life after being cocooned away for so long.

The band are relishing the day that they will be able to hit the road again: the rush of performing, the camaraderie of the crew, meeting new people and discovering new places. And that will come. But for now, embrace their new music, which is destined to propel them to greater things.