A history of jelly 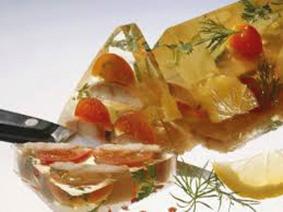 What could be more lovely for a children’s party, than serving up the congealed residue of a boiled up cow’s hoof?

The idea of creating sweetened and flavoured hoof-based puddings in one form or another must have been around since people discovered how to boil up bits of animal. We know for certain that during the Middle Ages, cooks discovered that they could preserve meat and other foods in their natural gelatin - which can then be clarified with egg whites - allowing you to suspend almost anything seemingly weightlessly in a clear gelatinous cube.

Whilst being wondrous to behold, the idea of carving through a clear blob of gloop to get to your food seems to have rather fallen out of fashion of late - mainly because it is, frankly, quite vomit inducing. But if you do happen to dip into a recipe book from the 1970s, you will almost certainly be treated to a selection of weird slabs of clear jelly with things trapped inside. During the eighteenth century, the use of gelatin as a pudding ‘jelly’ became increasingly popular with dishes being coloured with saffron, cochineal and spinach and flavoured with sugar, lemon juice and mixed spices. This preparation was called jelly; English cookery writer Hannah Glasse was the first to record the use of this jelly in trifle in her book The Art of Cookery, first published in 1747.  Interestingly, the popularity of jelly has been in steep decline since its mid 70s heyday - when entire families would subsist on jelly for weeks at a time. A recent study by food anthropologists has found that the wobbly treat is now relegated to a few isolated pockets of adults living in Wales and the Outer Hebridies. It is predicted that by the end of the decade jelly consumption will have ceased altogether - thankfully.