Who wants to be a Minionaire? 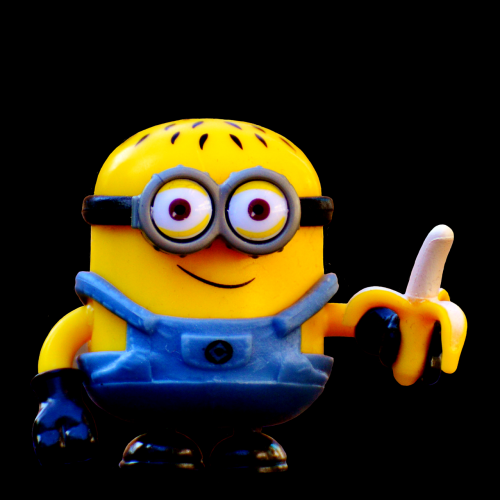 I’ll admit that I’ve only ever seen about three minutes and thirty-five seconds of the first Despicable Me movie before the compound layers of smudges, scratches and fingerprints on the rented DVD overwhelmed my poor DVD player and it politely revolted, spitting out the disk and asking me if I was having a laugh.

There was more extractable data from the DNA smeared across the surface of this DVD than there was from the actual encoded disk.

Denied the chance to watch what has become one of the most popular children’s movies in recent times, I never had the chance to catch ‘Minion fever’ (which is a little bit like scarlet fever, only more irritating and far more infectious to children).

Their appeal to children is obvious; like children, they fall over a lot, talk gibberish and are incapable of carrying out a full day’s work successfully. If it weren’t for the fact that they are animated characters whose frankly haphazard working practices and lack of communication skills are regarded with fondness and endearment, they would have been sacked for gross incompetence or been the cause of the wholly preventable death of either themselves or a work colleague.

Perplexingly, these yellow haemorrhoids have become increasingly popular amongst fully grown adults who have made the world aware of their ‘sense of humour’ (presumably frozen in stasis at the age of eight) by bombarding their Facebook posts  with hi-la-rious, yet entirely unrelated quotes, embellished with a minion in a pink wig or something.

If, for some reason, you’ve read my previous ‘work’, you’ll be fully aware of my hatred for the long-established inspirational quote fraternity, endlessly posting emotionally manipulative, delusional nonsense dressed up as philosophy.

Well minion quotes don’t even try that hard; it’s your usual ‘You Don’t Have to be Mad to Work Here But it Helps’ inoffensive axiom straight from the 1980’s, but with a badly compressed, low-res jpeg of a minion plastered into the corner for some inconceivable reason.

I wasn’t even that annoyed by them at first, just really, really confused by the concept. I mean, for it to be a quote, it has to have been said or written by someone at some time. These aren’t. They’re just anonymous idioms made up by a faceless nonentity, not even quotes from the movies!

Why not just post the washing and ironing instructions for a men’s Polyester shirt with a picture of Virgil from Thunderbirds holding a feather duster? It would make about as much sense.

Retro Games That Never Go Out of Fashion