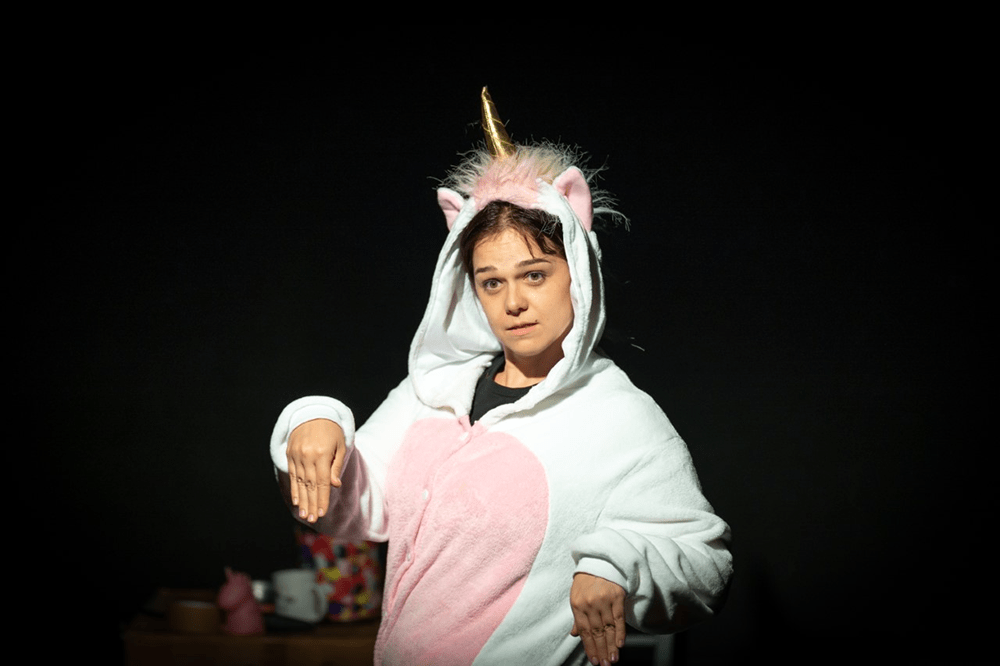 Somewhere to Belong will be visiting the Arts Centre at the Old Fire Station in Oxford on Thursday, 12 May.

Following a successful run at the Lion and Unicorn Theatre, the award-winning Sycorax Collective are proud to present Somewhere To Belong.

Described as a personal and funny exploration of loving more than one gender, the piece has written and is performed by Kim Scopes (writer and performer of 5* production BLUE and London Pub Theatre Standing Ovation Nominee).

A spokesperson for the show explains the plot: “Somewhere To Belong finds CK, an unwitting contestant on a strange and invasive gameshow, forced to undertake humiliating tasks in a bid to win a grand prize.

“Will it be a yacht? An all-inclusive holiday to Lanzarote? The ragged remains of her pride? No-one knows. But with all eyes on her, and only the voice of the gameshow host to guide her, CK must navigate this bizarre and uncertain game until the time runs out and she can finally get a glimpse of what she’s been competing for.”

Based on Scopes’ own experiences and over 40+ interviews from a global bi+ community, Somewhere To Belong uses clowning and a ridiculous gameshow premise to showcase contemporary experiences of being attracted to more than one gender.

Incorporating personal interviews with bi, pan and queer people from around the world, it takes a look at how they are presented on TV, dating apps and private group chats to explore the challenges of biphobia and bierasure in popular culture.

Kim Scopes said: “I started telling people I was Bi in my early 30s – but I still didn’t feel like I qualified as being queer. I started to talk to friends, people in the LGBT+ community, and I noticed similar experiences were being recounted: feelings of shame and being dismissed or accused of infidelity.

“The more I talked about it, the more it felt like we were growing a community of voices that challenge the dominating narrative about bi+ people. I wanted to make a show that explored that in a funny way – that celebrated the ridiculousness of the position we find ourselves in.”

Kim and the play’s producer, Laura Furner, are also the creators of the Somewhere To Belong archive – a digital archive that platforms in-depth interviews with bi+ people about their experiences. The largest archive of its kind, the collection directly inspires the theatre production, creating a unique and symbiotic relationship between archival material and live performance.

Kim Scopes is an actor puppeteer, theatre maker and writer. Credits include A Christmas Carol adapted by Patrick Barlow and starring Jim Broadbent in London’s West End, Strange Hill High for CBBC, Newzoids for ITV, Don’t Worry Little Crab with Folded Feather for The Little Angel Theatre, the Blue by Sycorax Collective for which she received a ‘standing ovation nomination’, Boris and Sergey by Flabbergast Theatre, AAAAA by Proforca Theatre and Becca’s Brunch ‘for Nick Jnr. Kim is one of the founders of Sycorax Collective, which is also an associate artist of the Lion and Unicorn Theatre.