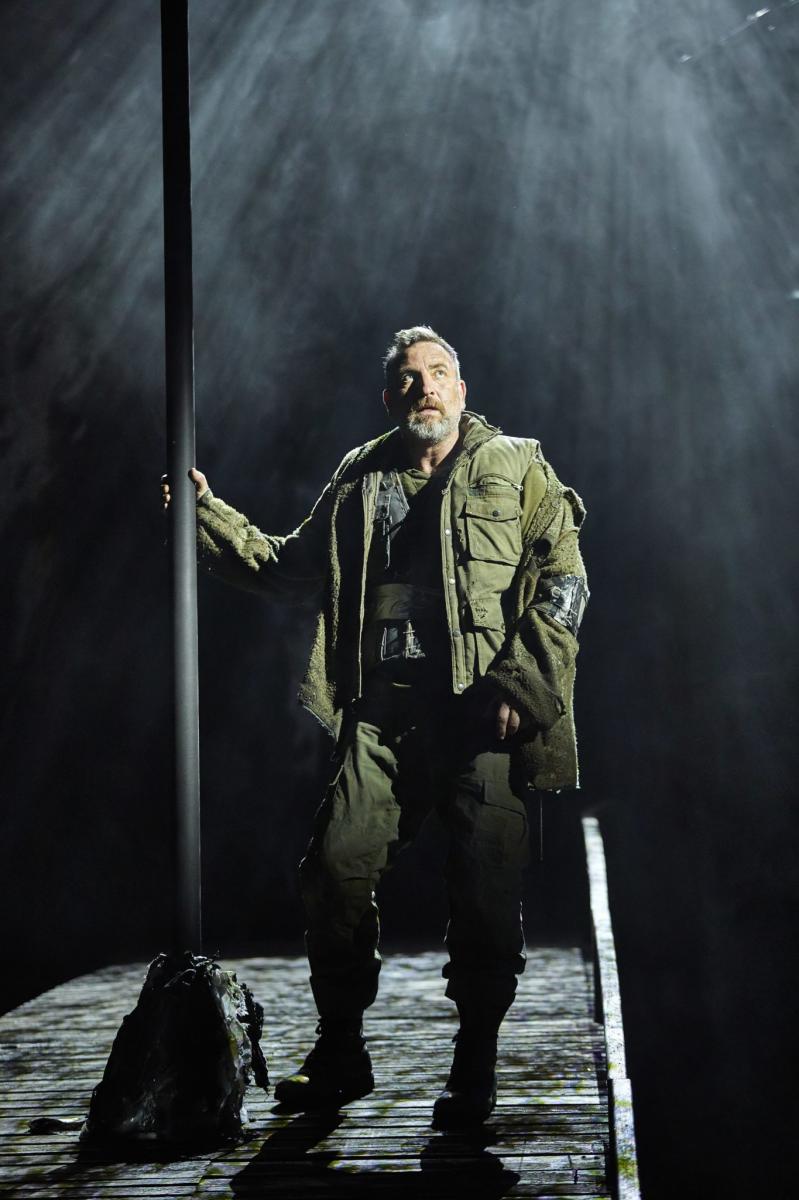 An apocalyptic outback awaits the audience at New Theatre Oxford as the National Theatre delivers a contemporary and brutalist rendition of Shakespeare’s Macbeth.

Having only seen amateur productions of Macbeth, last night ignited within me a new-found appreciation for the play. Co-directors Liz Stevenson and Rufus Norris presented a dystopian depiction of Macbeth with modern touches, creating an urban setting that still carries Shakespeare’s motifs of superstition and corruption during the Civil War. This fresh revamp relies heavily on the mise-en-scene, which wasn’t overbearing to the point of distasteful but certainly left the realm of traditional Shakespeare in this respect. Costume design from Mortiz Junge contemporised the characters and effectively blurred the boundaries and conventions of gender roles - this adequately reflected the world we see in 2018/19, pushing this play once more into new territories. The juxtaposition of Shakespearean language has been balanced well with these urban and modern touches rippling through the cast from the ‘War dog’ mentality of the soldiers, to the undressing of hierarchies which seem less prominent in this production. [caption id=“attachment_44500” align=“aligncenter” width=“701”]

Olivia Sweeney (Gentlewoman), Kirsty Besterman (Lady Macbeth) and Reuben Johnson (Doctor). Photo credit: Brinkhoff Mogenburg[/caption] Attention to detail is carried through in the set, as if loomed over by a thunder cloud ready to break at any given moment, with medieval features varnished in a gothic-grunge aesthetic – the backdrop hangs like seeping black oil, blockading any prospect of new and reformed life to perfectly precursor the decay of the Macbeths. Macbeth’s confliction was brashly portrayed by Michael Nardone, gracing the character with both poetical finesse as well as brutish masculinity. Amidst his bravado, Nardone also eloquently depicts Macbeth’s emotional torment which becomes easily identifiable with injections of unexpected humour. His performance is unquestionably matched by Kirsty Besterman who did indeed “unsex” our Lady Macbeth to transcend into a genderless survivor adapting to the brutal climate, while also managing to depict her nurturing compassion. Our leads set the precedent for an unforgiving world in which survival is the only goal, whilst showing a humane accessibility to the characters for a couple essentially trying to exist. [caption id=“attachment_44499” align=“aligncenter” width=“735”]

Michael Nardone (Macbeth)_UK and Ireland NT tour. Photo credit: Brinkhoff Mogenburg[/caption] A favourable mention goes to the representation of the witches – not wart-faced old women, but majestic entities that haunted the stage and soon Macbeth’s conscience. This perfectly set up the reliance on mythical prophecies and fantastical ideals that are imbedded within all the characters, connoting to the audience as to why such dire and radical actions are taken. This excellently foreshadows both Macbeth and Lady Macbeth’s descent into madness as they’re consumed by murderous guilt. But not as you might think. No, this was not a power-hungry couple hell bent on the crown but two survivors combatting the desolate world around them. This notion was certified by Rae Smith’s striking set design which, frankly, left me mesmerised – I was in awe of the swift stage transitions as the cast weaved in and out of the moving segments. Despite my admirations this isn’t necessarily an easy watch. For those unfamiliar with Macbeth it could feel quite enduring in this respect and can make some narrative steps uneasy to follow – some scenes forgo their welcome, whereas others conclude too soon. That being said, this production of Macbeth seems to take a more tailored and specific approach to focus less on the traditional telling of Macbeth, but reshape a story of gender roles, corruption, and sacrifice and spin it in a – dare I say – avant-garde remaking to resonate with audiences today. Macbeth is on at New Theatre Oxford until January 12. For tickets visit www.atgtickets.com

As Macbeth comes to Oxford we interview the leading lady, Kirsty Besterman

Let's see a show of hands to see Miranda Sykes!