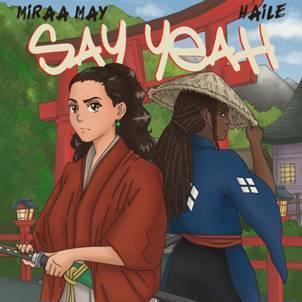 Miraa May, songwriter, performer, artist and sheer force of nature follows her critically acclaimed Dark EP, co-write on Jorja Smith’s Top 10 hit “Be Honest” and recent paean to her new-born son, “Baby”, with her the video for her new Island single “Say Yeah”. The video features WSTRN and Harry Pinero. You can catch a glimpse of the making of the track on the new episode of Miraa’s YouTube mini-series ‘Miraa & Friends’ which features Haile.

“Say Yeah’ is the third new song Miraa has released in 2020, following “Woman Like Me” & ‘Baby’ and is the start of a new chapter as she embarks on the journey of motherhood.

Miraa recently featured in a new documentary created by The Face magazine called ‘Voices of Jamaica’ which followed 15 artists on a week-long writing retreat put together by UK producer Cadenza. The film features Jorja Smith, Miraa May, Amine, Proteje and legendary producers Dre Skull, Guilty Beatz, & P2J amongst others.

Miraa has also been busy filming, and now releasing, a mini-series of studio sessions on her YouTube channel titled ‘Miraa & Friends’ giving an insight into what goes down in the studio. The 7-part series (the first 4 episodes have been released and remaining 3 have been put on hold until post Ramadan) features artists and producers including Jevon, Cosima, Sam Tompkins, Big Zuu, Samm Henshaw, Knucks, Moss Kena, & Luke Gomm.

A prolific and much in demand songwriter, Miraa has recently worked with Nafe Smalls on the mixtape track ‘Bad For Me’. On the live front 2019 was a great year for the Algerian born, Tottenham raised artist who sold out two headlining shows in London, performed at Glastonbury, Reading & Leeds Festivals, The Ends Festival and BBC 1Xtra Live in Birmingham.

Reading and Leeds announce 2021 day tickets are on sale now