Reading and Leeds announce 2021 day tickets are on sale now 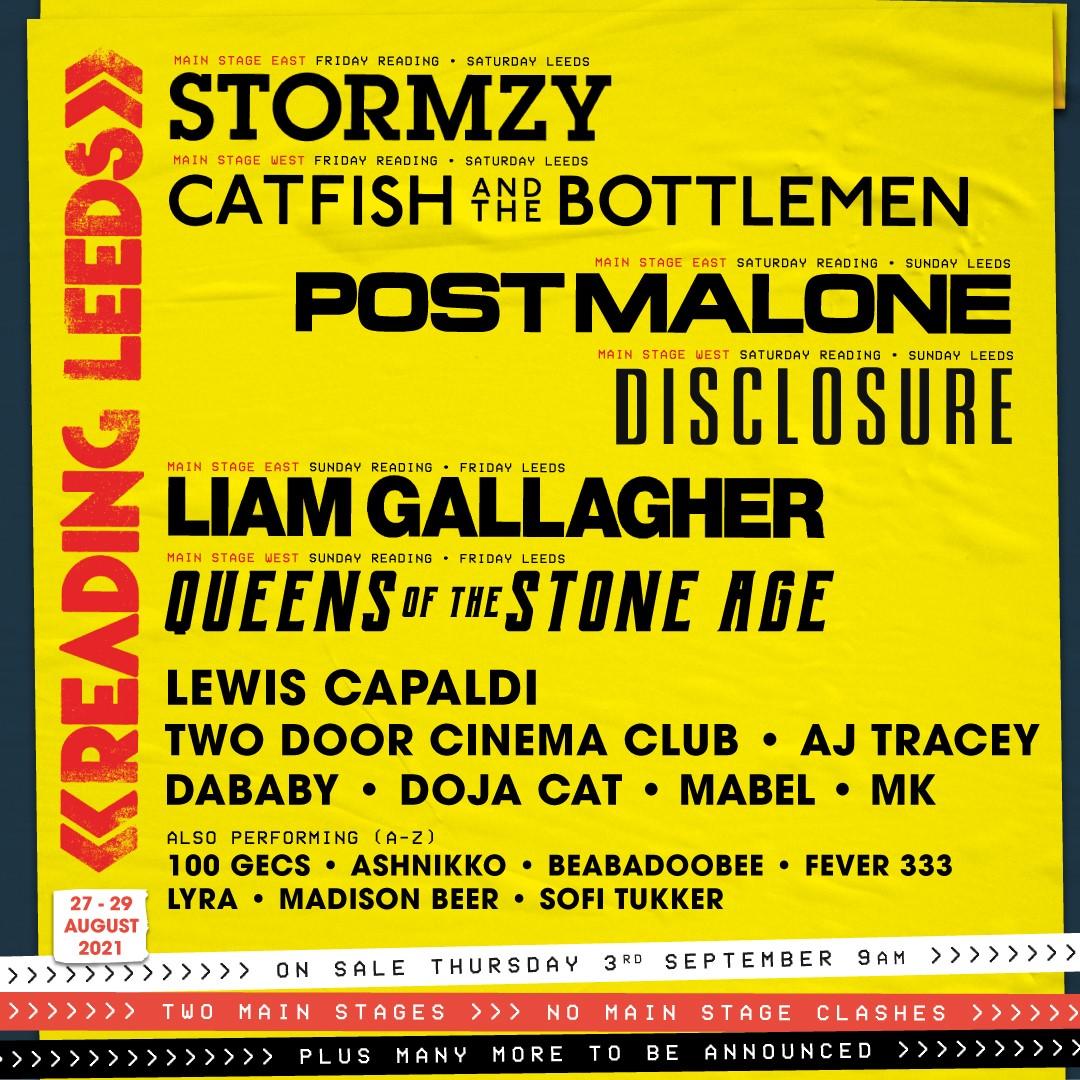 Thursday 24th September 2020: Today Reading and Leeds Festival announce day tickets for the 2021 editions of the festival are on sale now, with day splits also being revealed, alongside some exciting new additions to the line-up including Gerry Cinnamon, girl in red and Sports Team. The three-day festival takes place on 27-29 August 2021, returning to Reading’s famous Richfield Avenue and Leeds’ legendary Bramham Park with headliners Stormzy, Liam Gallagher, Post Malone, Queens of the Stone Age, Catfish and the Bottlemen and Disclosure. Day tickets and full weekend tickets are on sale via https://www.ticketmaster.co.uk/reading-and-leeds-festival

Reading and Leeds Festival have also announced several more names across the 2021 main stages. Celebrated British hardcore punk band Gallows are set to make an almighty return to Reading and Leeds, having last performed at the festivals in 2013. Having emerged from the underground punk scene in 2005 with the explosive albums ‘Orchestra of Wolves’, ‘Grey Britain’ and their most recent ‘Desolation Sounds’, the band will undoubtedly bring their confrontational, ferocious and anarchic live performance to the festivals’ stages.

Following their stratospheric rise in 2020, indie alt rock six-piece Sports Team are set for an explosive return to Reading and Leeds in 2021. Their dedicated legion of fans can be sure to expect hits from the band’s chart-topping Mercury Prize nominated debut album ‘Deep Down Happy’ and anticipate a highly electrifying live performance led by frontman Alex Rice.

Nova Twins are also set to bring their dominating, boundless energy to the Reading and Leeds stages. A force to be reckoned with, the London based female duo refuse to conform to any template, championing their own a unique bass-heavy genre-warping sound. They use their platform to advocate inclusivity and diversity, influenced by the socio-political experiences of their day-to-day experiences.

Dreya Mac’s explosion onto the rap scene with her debut single ‘Skippin’ quickly showed the world her ferocious multiple abilities - singing, rapping, dancing and directing. Her performance is set to be a great showcase of the contagious energy and mesmerising flow that’s earning her worthy attention.

Liverpool’s legendary indie rockers The Wombats are also making a return to the Reading and Leeds stages, undoubtedly bringing a selection of their infectious, guitar-driven beats and hooks from across their 4 studio albums, including iconic indie bangers ‘Let’s Dance to Joy Division’ and ‘Moving To New York’, and some future pop licks from their latest album ‘Beautiful People Will Ruin Your Life’.

Manchester’s house DJ duo Solardo have rapidly become the main flag-bearers for their hometown’s iconic musical history. Working with CamelPhat, Loco Dice, Eli Brown to name a few, and remixing the likes of Calvin Harris, Gorgon City, Dua Lipa and MK, has led to residencies in Ibiza, giving them the perfect credentials to bring the dance party to Reading and Leeds.

Gerry Cinnamon will be bringing his relatable, anthemic, sing-a-long hits including ‘Canter’ and ‘Sometimes’ to the festival for the first time. The already legendary live performer has been on an exponential rise with his sophomore album shooting straight to UK Number 1 in the Official Album Charts earlier this year. His performance is not to be missed with his ability to whip audiences into a frenzy and inspire electrifying arena-wide singalongs.

With over 50 million followers and the third most-followed music channel in the UK behind Ed Sheeran and One Direction, Watford-born YouTuber and rapper KSI is set to take to the Reading and Leeds festival stage next year. Evolving from a YouTube sensation to boxing champion to a bonafide, respected artist, fans can expect him to play tracks from his critically acclaimed debut studio album Dissimulation.

Bradford’s Bad Boy Chiller Crew (BBCC) meteoric rise from driving an ice-cream van to underground wonders has caught the eye of many, becoming one of the most hyped new acts of 2020. BBCC are modernising the fundamentals of classic old-school garage tunes to produce authentic, bop-worthy bass-lines, ready to hit festival crowds.

The transition from online creator to rapper has proved extremely rewarding for Niko B with his hit ‘Who’s That What’s That’ peaking at No. 26 on the UK Singles Chart this year and also touring with NSG. His blend of hip-hop and comedy has created something unique that the festival audiences will be eager to see.

Originally a YouTube channel sharing founder member Joe Lazcru’s DJ mixes, the Crucast collective featuring Lazcru, Skepsis, Darkzy, Bru-C, TS7, Kanine, Window Kid, and MC AD have been taking the music scene by storm. Pushing a vital new strain of beats that include electro house, DnB, garage, and more, Crucast will be returning to Reading and Leeds in 2021 showcasing plenty of chunk bass and high-octane rhythms that will have the festival crowds dancing well into the night.

girl in red brings a striking blend of raw and relatable alternative pop from Norway, quickly becoming celebrated for her unapologetic, powerful songs about love, mental health, and sexuality. Since breaking onto the scene in 2018, girl in red has captured the attention and hearts of her 6.7 million monthly Spotify listeners, swiftly establishing her as a teenage queer icon.

Following her rise to fame as a YouTuber, Ivorian Doll has hit rap scene hard and true with fiery wordplay and pop appeal all at once. As the self-proclaimed “Queen of Drill”, she will be sure to make her debut performance at Reading and Leeds is one to remember.

Fresh from the release of their critically acclaimed debut album ‘Lie Out Loud’ through the iconic Chess Club Records, Bloxx have fast become a force to be reckoned with in the indie pop world. Led by vocalist/guitarist Fee Booth, the Reading and Leeds crowds can look forward to Bloxx’s cathartic bangers that seamlessly define the emotion attached to growing up in a satellite town and experiencing love for the first time.

Dual-fronted power pop Hot Milk are set to bring a chaotic blend of pop-rock anthems and catchy choruses. In just two short years since exploding onto the scene, their angsty female/male vocal duo approach has commanded them high-profile support slots for the likes of the Foo Fighters and You Me At Six, proving them as ones not to be missed!

With hundreds of acts set to play, Reading and Leeds will return as the ultimate festival weekend of the summer - defining and celebrating the sounds of modern ground-breaking music, as well as a world-class comedy line up.

Fans can be the first to hear further line-up announcements, artist news and much more by signing up to the newsletters at www.readingfestival.com and www.leedsfestival.com or via the official Reading & Leeds Festival app, available to download now on Android and iOS.

Queens Of The Stone Age

Day and Weekend tickets on sale from https://www.ticketmaster.co.uk/reading-and-leeds-festival