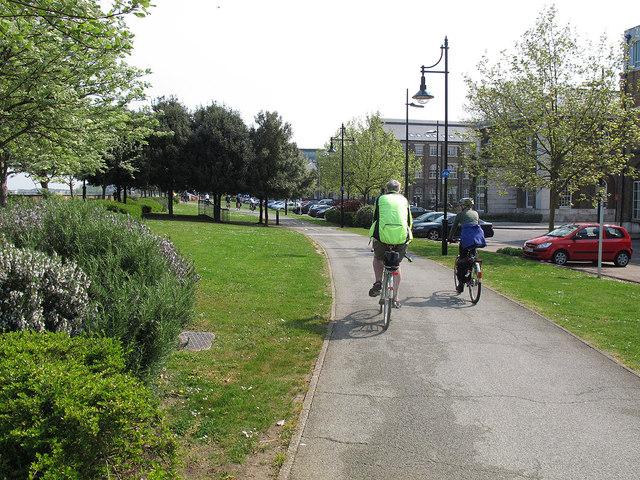 Whether you are a serious club cyclist or you prefer to hop on a bike for your commute to work, Oxfordshire is home to some fabulous cycle routes. The county is a fantastic area to explore by bike, with scenic countryside boasting splendid views of the Chiltern Hills and the charming villages dotted around. There are plenty of routes to discover in the area, but few are as enjoyable as the Thames Cycle Route that winds through the county connecting Oxford with London. At 96 miles long (or 155km), the Thames Cycle Route may be too challenging for some to attempt in one go, but the route has plenty of interesting sights to discover along its riverside tracks, country paths and urban cycle lanes. For cyclists used to attempting long-distance routes, this really is a fantastic opportunity to head out of the city and explore the leafy countryside. The Thames Cycle Route is part of the National Cycle Network and you can join the trail at the start of route 4 which begins in Greenwich, South East London. Starting from the Greenwich Foot Tunnel, the route takes you along the South Bank, across Lambeth Bridge to Pimlico and eventually Chelsea. Once you pass through the luxurious streets of Chelsea and Fulham, the route crosses Putney Bridge and it is here where the cycle path becomes far less urban, more interesting and certainly more relaxing! Once you reach Putney the route joins with the Thames Path before crossing the huge Richmond Park. This is the largest of London’s Royal Parks and famous for its historic buildings and population of red and fallow deer that can be seen roaming through the park throughout the year. The following section of the route is one of the most picturesque and, as the route clings close to the river, refreshingly traffic-free. This section passes through Kingston-upon-Thames and Hampton Court Park, where you can find the historic palace that was once home to Henry VIII, gorgeous gardens and the famous maze. Don’t worry; there are several others sites of great natural beauty on the route! The cycle route also passes through Great Windsor Park and past Dorney Lake, a perfect spot to stop for lunch. The trail winds along the Thames to Reading, from where you head north into the scenic Chilterns countryside towards Abingdon and, eventually, Oxford. Of course, it is vital that you keep safe whilst you cycle. Although, the majority of this route ensures that you keep to the designated cycle path, you will still need to deal with road traffic when you are cycling through the more built up areas. Everyone now knows about the dangers of cycling without a helmet but awareness still needs to be raised about how cyclists can avoid dangerous situations. Cycle Claim Line, a bicycle accident specialist, explains that improving risk awareness and enhancing knowledge of safe cycling practices is essential for a cyclist. The Highway Code states that cyclists must have working front and rear lights attached to their bike when cycling between sunset and sunrise. Although it is not a legal requirement for cyclists to use lights during dense fog during the day, it is highly advisable to ensure that you can be seen clearly when there is seriously reduced visibility. Ensuring that you wear high visibility clothing is a great way of alerting other road users to your presence, which is especially important when cycling in poor light. Although, the clothes themselves won’t keep you safe, they should help to ensure that other road users are more cautious around you. There are also plenty of tips that can keep you safe from the traffic on hectic city streets. One of the leading causes of cycling fatalities is from heavy goods vehicles (HGVs), buses or large lorries turning left. Around 20% of all cycling fatalities are caused by HGVs, despite these vehicles only accounting for 4% of vehicle kilometers. It is always highly advised to wait until after you have passed a junction before overtaking a large vehicle on the left. Many larger vehicles will have a blind spot so ensure that you make yourself as visible and safe as possible by driving assertively to ensure that you can react to potential risks ahead. Always be aware of the risks posed by parked cars too! This may sound strange but plenty of cyclists have been hit by car doors opening into their path suddenly, it is advised to cycle in the centre of the lane when passing parked cars as there may be hidden dangers. Ensuring that you have a gap of a few metres between you and any parked cars gives the chance to react to your surroundings. Staying safe on the road is all about ensuring that you see dangers as quickly as possible!

Rebranding the City of Dreams