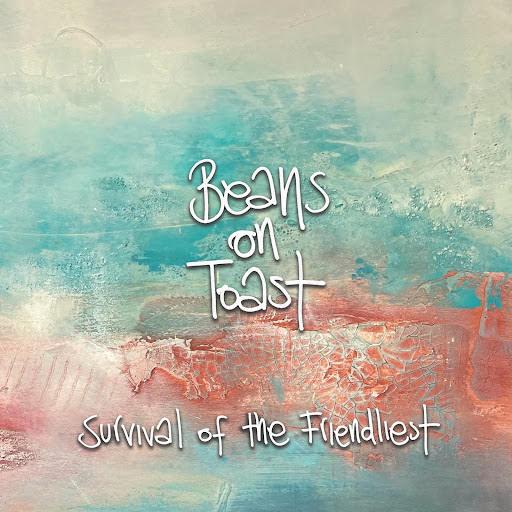 “Survival of the Friendliest’ lifts the soul up and provides a much needed energy boost in difficult times.”
DSCVRD

“the perfect antidote to re-energise us all.”
LOUDER THAN WAR

“shimmer(s) with Beans’ trademark of truth and humour.. Captivating”

Beans on Toast will be hitting the road for a run of UK shows early-on in 2022.

A second leg of gigs in support of his acclaimed new album, Beans will be backed by the esteemable Jack Flanagan of Mystery Jets and Kitty Liv (of Kitty, Dasiy and Lewis fame) as he brings the upbeat songs of ‘Survival of the Friendliest’ to a venue near you.

Speaking about what to expect from the upcoming fixtures, Beans says:

“I can’t bloody wait for this run of dates, some of my all-time favourite venues on that list. I’ll be joined on stage by the legends Jack Flanagan (Mystery Jets) and Kitty Liv (Kitty, Dasiy and Lewis) in the new musical ensemble.  Singing songs, making friends, telling stories and offering hope and light relief from this bizarre world. See you out there.”

Full dates and details can be found as follows:

Tickets for all shows are on sale now at: www.beansontoastmusic.com

Beans on Toast also recently released the single “Humans”. A lilting, lullaby-like track described by Steve Lamacq on BBC6Music as “an injection of hope and community”; it finds the singer-songwriter pausing for tender reflection on humanity, nature and our very existence. It follows recent singles “Not Everybody Thinks We’re Doomed” and “A Beautiful Place”, all of which can be found on his new album: ‘Survival of the Friendliest’.

Produced by Blaine Harrison of Mystery Jets and recorded at Big Jelly Studios in Ramsgate, ‘Survival of the Friendliest’ is a record all about hope, positivity and camaraderie, that finds an artist celebrating the very best of human nature. Proving a big hit with fans at Beans’ recent December shows and with the critics, Louder Than War praised Beans’ latest effort as “the perfect antidote to re-energise us all”, whereas RNR Magazine championed the record as “rather special…The lyrics shimmer with Beans’ trademark of truth and humour”.

The album features a host of friends & musicians including the spoken-word artist Dizraeli, acclaimed author Nick Hayes (on banjo), multi-talented gospel singer Sarah Telman (backing vocals, strings), Rosie Bristow of Holy Moly & The Crackers (accordion), Adriano Rossetti-Bonell (saxophone) and Graham Godfrey (drums), alongside contributions throughout from Mystery Jets’ Blaine Harrison and Jack Flanagan. With every fibre made with a little help from his friends, the cover art for the album is by London based painter Georgie Mason; whereas its videos have come courtesy of wildlife photographer and old school-friend: Curt Walsh.

‘Survival of the Friendliest’ is out now via his own BOT Music imprint. An album of friendship, humanity and creativity, it’s exactly what the world needs now. Catch Beans on Toast touring the record at some of the UK’s finest independent venues this Spring…

BEANS ON TOAST - NEW ALBUM: ‘SURVIVAL OF THE FRIENDLIEST’
OUT NOW, VIA BOT MUSIC
LISTEN TO THE ALBUM HERE