Be Kind - A column by Beth Ritchie 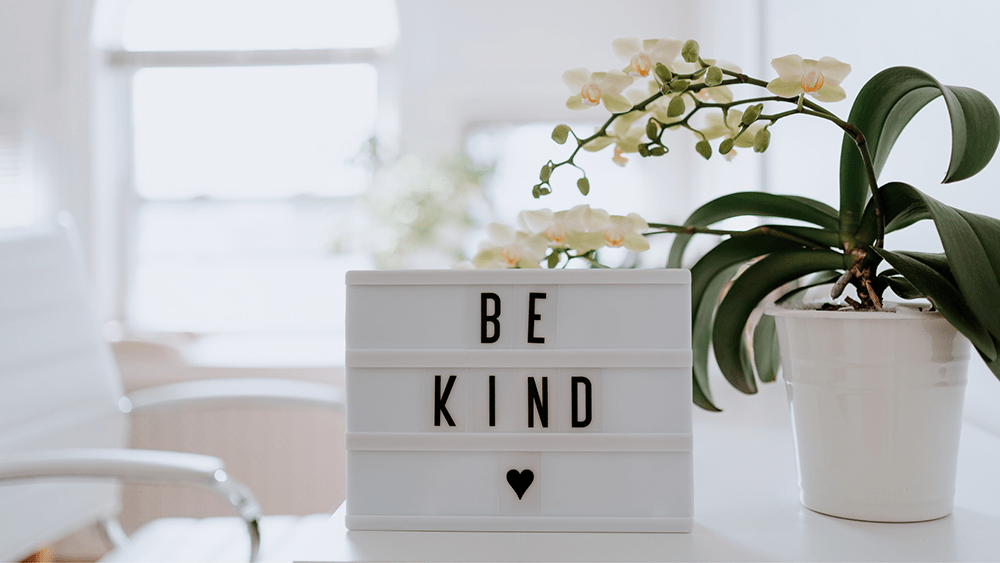 You know how when you say a word over and over again it starts to feel like a fake word that you just sort of made up? Then you begin to question its existence as a real word. And then you start to worry that maybe your entire vocabulary is a load of gobbledegook, and wonder whether anyone else actually understands anything you say or whether you’re just speaking your own language and people are just nodding along to be polite…

Maybe it’s just me that takes it to that level of extremity, but I know for sure that saying things over and over again until they lose all meaning is definitely a thing (and as a copywriter, this is a bit of an occupational hazard for me).

This is why I sometimes worry that the well meaning, but ultimately meaningless, hashtags that often dominate our social media feeds will become lost in the ether of overuse.

“Be Kind” as a popular phrase came about as a response to the sad death of Caroline Flack, who had faced so much criticism online and in the press. When she died, “Be Kind” emerged as a trending hashtag (a way of labelling and categorising social media posts regarding the same topic, for those not down with the kids).

“Be Kind” appears everywhere now, on social media and in the press. It’s become so trendy that people are making money out of it with merchandise of all sorts from t-shirts to water bottles to pencil cases. With this level of awareness, you’d think that kindness would just be everywhere now, how could you miss it?

But kindness clearly isn’t everywhere, because despite what happened to Caroline Flack, unkindness still seems to seep into everything, specifically in the press.

In the last week, we’ve all borne witness to the Meghan and Harry interview debate. Both sides have been victim to the same level of vitriol that Caroline Flack faced, if not more so. This is a really clear example of the unkindness, judgment and negativity we’re up against every single day on every level.

We sadly often see people/publications use the #bekind hashtag when they are anything but.

It’s one thing to say it, it’s another to live it.

Having been through my fair share of negativity over the years, like many people, I now do my best to cultivate a positive atmosphere in my social media newsfeed, by following and engaging with people and topics which I find uplifting and inspiring.

I like to be able to control my consumption of negativity so that I can offset it with kittens, rainbows and unicorns.

Unfortunately, I can’t do the same with the press. It’s one or the other. Avoid it all together or allow its negativity to permeate my existence. And I wonder whether as an adult living during a pandemic in 2021, is avoiding it altogether a responsible way to live? Knowing what’s going on is almost an obligation as a member of society when everyone’s cooperation is so crucial.

Ultimately the news/press is a vital tool for education and information but is sadly so often manipulated by those with other agendas.

Harry himself said last week that “if the source of information is inherently corrupt or racist or bigoted then that filters out to the rest of society”, and I would add negative and judgemental to that list.

Whichever side you stand on the Harry and Meghan debate, those involved are just human beings who deserve kindness like everyone else. But somewhere in the discussion over who is right, the need for kindness and understanding for everyone appears to have been lost.

As I get older, I realise that there are always two sides to a story. There is A’s story, and B’s story, and often both A and B have valid points. The truth is always somewhere in the middle.

The only way of protecting ourselves from negativity and pulling the #bekind movement back from the brink of overused annihilation, is to make sure that kindness remains a conscious choice that we make every day, no matter who is watching.

Kindness isn’t a weakness. So let’s use it as a strong armour to defend ourselves and others against the judgement and negativity that we all know can have tragic and irreparable consequences.

Local Start-Ups in the South West