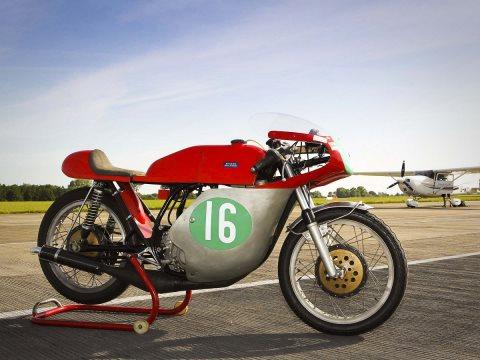 This 1968 Barry Sheene Bultaco TSS 250 race bike, campaigned by Barry Sheene in the 1960s, is for sale with H&H Classics on November 14th at the National Motorcycle Museum for an estimate of £25,000 to £35,000. Sheene used this bike in his first season racing as a novice, giving this Bultaco a legendary history.

Mark Bryan of H&H Motorcycle Department says: “Given its provenance and racing history with Barry Sheene, this is a very collectable motorbike. He is much loved and still vividly remembered everywhere in the motorcycle community and beyond.”

James Hewing, Director at The National Motorcycle Museum says: “A very important piece of bike racing history and will be amazing to see it sell at the November sale”.

The current owner also adds: “This is the original, largely unrestored but well-maintained machine, ridden by Barry in 1968. His father, Frank Sheene, identified the bike when I was riding it at Scarborough in the mid 90s and brought Barry along to view it. It was last used for the BBC “Legends of Speed” film based on Barry Sheene. Frank Sheene was a Bultaco dealer and confirmed this bike was his bike.”

The legendary Barry Sheene with the Bultaco

The seller has owned the bike since the 1985 and is only selling as he won’t be riding the bike again. He has all the original parts, spares pack and also the consecutive numbered spare engine is open to a separate sale.