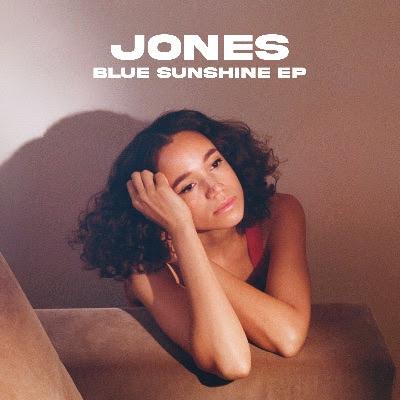 “Her harmonies have the raw power of early 90s RnB dreams.” - The Line of Best Fit

JONES’ previous singles ‘Around’ and ‘Read My Mind’ reaffirmed her growing reputation as a bright new hope in the soul / pop / R&B space, while also infusing her sound with elements of London’s underground jazz scene. JONES is now set to attract another surge of acclaim as she releases the new EP ‘Blue Sunshine’. The EP features both recent tracks as well as its title track and new single, plus two other brand new songs. Listen HERE.

The ‘Blue Sunshine’ single rejuvenates classic trip-hop vibes for 2021. JONES’ world-beating voice is naturally the star of the show, bringing class, elegance and poise in abundance. Yet underneath its obvious beguiling charm, the track is rich with arresting sonic touches: punchy hip-hop beats played by live drums, a delicately dissonant guitar loop, and the kind of sweetly sophisticated vocal harmonies that are a big part of her sound.

The other new songs on the ‘Blue Sunshine’ EP more than match the standards that JONES has already established. ‘Uniform (Bad Dream)’ would’ve worked well as a piano ballad, but Joe Armon-Jones takes it somewhere else entirely, a place in which pop and jazz are naturally intertwined. The closing ‘Yoga of Relationships’ is less direct if just as intriguing, setting a very live sounding vocal against unconventional production elements. The EP also features contributions from Nardeydey (Nérija, Maisha, Seed Ensemble) and Oli Barton-Wood (Nubiyan Twist, Nilüfer Yanya).

While the EP’s sound is immediately captivating, repeated plays show that JONES has also been inspired to provide stronger lyrical ideas and nuances than ever before.

As she explains, “Written during the tension of the first lockdown, this ‘Blue Sunshine’ EP is a collection of songs in the form of laid-back soul. It was an interesting time for creativity because I found myself in a mental space that I’d never experienced before. It explores a lot of ideas - relationships, family, love, racial affairs - it was a musical journal of that moment in time.”

The release of ‘Around’ and ‘Read My Mind’ resulted in new support and established fans again triumphing JONES’ talents.Radio 1’s tastemaker trio Rickie, Melvin and Charlie who compared her to “The Internet meets Cleo Sol” while further support included BBC Introducing London, Jazz FM and Hoxton Radio. It also resulted in JONES playing the Summer By The River Festival last night, an event that was curated by BBC Music Introducing in London.

It continues the acclaim that has followed JONES ever since her debut album ‘New Skin’. Originally from Aldgate, east London, JONES has been highlighted by Radio 1, Radio 2, 1 XTRA, Capital XTRA and Jools Holland. Meanwhile Claptone, HONNE and CAZZETTE have all enlisted her skills as a featured artist.