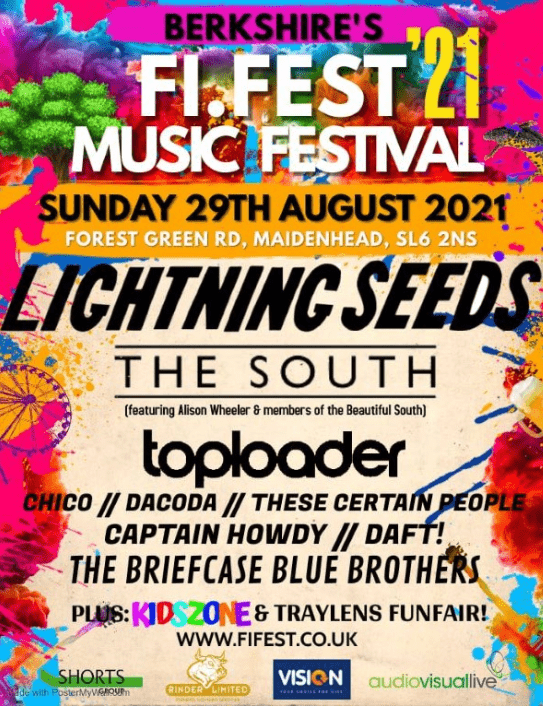 Fi.Fest ‘21 is just around the corner, and this year it’s even bigger and better than last year!   The Main Stage provides a full day of high-quality entertainment, the KidsZone has been designed to keep little minds active and creative, and there will a huge variety of food and drink for all the family.

Fi.Fest is looking to lead the way in providing quality, family-friendly fun and entertainment where there is something for every member of the family to enjoy. We are sure you will remember some of the big-name artists playing on the main stage this year, so don’t miss out on your chance to enjoy this incredible day!

Featuring some huge bands from the ‘90s and ‘00s. The 2021 line up includes: The LIGHTNING SEEDS, THE SOUTH, TOPLOADER, CHICO as well as !Daft!, These Certain People, The Briefcase Blues Brothers and much more!

Fi.Fest will be providing you with an amazing 10 hours of entertainment, a fantastic summer’s day and evening of great music for all the family to enjoy!

Tickets for the festival are available now from the following link -   https://www.fifest.co.uk/tickets

Ian Broudie originally emerged from the post-punk Liverpool music scene of the late seventies playing in the band “Big in Japan” alongside fellow band members Bill Drummond (KLF) Holly Johnson (Frankie Goes To Hollywood) Budgie (The Slits/Souxie And The Banshees) and Jayne Casey (Pink Military). Before the band ended in 1979 they created the independent record label Zoo Records which would later feature the bands Teardrop Explodes and Echo & The Bunnymen.

In 1989, Broudie returned to his songwriting with a set of home recordings. Out of necessity, with no record contract and no band in place, Ian sang and played everything on the tapes himself recording in his “spare bedroom”. Eventually, there was the opportunity for extra production on the tracks and a few hundred copies of “Pure” were pressed up through Rough Trade on the small independent record label Ghetto. “Pure” was released under the name “Lightning Seeds”, the imaginary group he had envisioned to write his songs for in the hope it would become a reality

Gradually over a period of months, “Pure” started to gain some attention. Initially with radio play from the legendary DJ John Peel and then specialist night­ time plays on regional radio stations. Pure began to climb the independent record charts and before long it was featured on daytime radio and became a chart success. Imported copies of the single had somehow made their way to the USA and Pure was spontaneously being played on American college stations and championed by KROQ’s legendary DJ Rodney Biggenheimer. It soon became the most requested record in California topping the airplay charts although it was not yet released or even placed with a label in the USA.

In 1990 with the release of the album Cloudcuckooland, the Lightning Seeds were truly off and running on both sides of the Atlantic although the first gig would come a lot later.

In 1991 after producing The Wild Swans and Pink Industry Broudie started on the second Lightning Seeds album ‘Sense’. Inspired and fascinated by the way loops and sampling were being pioneered and used on a lot of hip­-hop records (in particular De La Soul) Ian decided that by using this sample based technology and methodology combined with Lightning Seeds structured arrangements and melody led cadences so contrasting in style to the music inspiring him he could create an unusual blend and an exciting direction for the band’s sound. To that end he began working on the album with co producer Simon Rogers who was adept at sampling and the perfect co-conspirator. Joined by Cenzo Townsend on engineering duties, they recorded the Lightning Seeds’ second album Sense. Ian’s brother Rob had kindly donated his front room agreeing to let it be commandeered for a couple of months as a makeshift studio.

The song ‘Sense’, which also became the album title, was the first of many song writing collaborations between Ian and his good friend Terry Hall. “Sense”, along with “The Life of Riley”, became the most effective and memorable recordings born out of this approach and pointed the way to the future sound of the band.

Following the release of the Sense album, Ian rented a couple of rooms in an old laboratory in Liverpool city centre and set up his equipment in a more formal studio setting. This was particularly fruitful since it allowed him time and space to produce records. During this period, Broudie produced artists such as Dodgy, Alison Moyet, Terry Hall, Sleeper and The Frank and Walters. He also provided free time for some fledgling artists, including The Divine Comedy.

In the meantime, The Lightning Seeds were once again without a label with the implosion of Rough Trade and Ghetto records. Nevertheless, writing and recording began on the next album ”Jollification”. There was a different atmosphere around these recordings – although it was the same recording team, improved technology helped Ian to find a more attainable sound and this encouraged him to focus more on Lightning Seeds; committing to becoming a live band, promoting the album and shelving all other distractions.

For the first time, Ian gathered musician friends together to form a formidable band originally consisting of Chris Sharrock (future Oasis drummer) Bassist Martyn Campbell (of legendary Liverpool beat band Rain) and Ian’s neighbour Paul Hemmings (also a founder member of the La’s). This was the nucleus of the live band although keyboard players and others came and went and Chris was later replaced by The Who drummer Zak Starkey. Jollification was released in 1994 on Epic Records it was easily their most accomplished album so far selling in excess of 900,000 copies.

In 1996, Euro ‘96 was set to be the first major football tournament to be held in England since they had won the World Cup on home soil in 1966. The English Football Association asked Ian if he would write a song for the England team. He had the idea of collaborating with two comedians David Baddiel and Frank Skinner, the hosts of popular TV show Fantasy Football. They then wrote and recorded the song 3 Lions ’96, which became a number one single on two occasions, selling over a million copies in the UK.

Another version of the song, 3 Lions ’98, also topped the chart two years later.

The album Dizzy Heights was released in 1996 and contained many of the group’s most successful hit singles. Ian co-­wrote with Nicky Wire (Manic Street Preachers), Stephen Jones (Babybird) and once more with Terry Hall (The Specials). A reworking of The Turtles’ song “You Showed Me” was also featured.

Halfway through recording the album, Broudie’s studio was relocated to a barge on the river Thames, owned by Pete Townshend, and the recording was finished on board. Dizzy Heights went on to achieve platinum sales, also receiving a coveted 5 star review in Q magazine.

The last Lightning Seeds album “Tilt” was released on epic in 1999 and was followed by a long hiatus. During this break from the Lightning Seeds, Ian returned to his hometown Liverpool and started helping to develop two unsigned bands The Coral and The Zutons. Subsequently this resulted in Broudie producing debut platinum selling albums for both bands –

The Zutons – “Who Killed The Zutons”

& The Coral – “Magic and Medicine”, “The Coral” and “Nightfreaks and The Sons of Becker”

This short stint back in the producer’s seat also saw Broudie produce debut albums for The Rifles (“No Love Lost”) and The Subways (“Young For Eternity”) as well as the recording and releasing the well-received solo album “Tales Told” on the Deltasonic label.

Ian’s Studio is now located in Liverpool on the roof of a warehouse, overlooking the river Mersey, in which he mixed the album “Don’t Forget Who You Are” which he had produced for Miles Kane in 2013. Broudie recently performed a solo concert, which included a collection of his songs and some of his favourite productions, with the Royal Liverpool Philharmonic Orchestra. Guest vocalists James Skelly, Terry Hall, Ian McCulloch and Miles Kane joined Broudie who was backed by guest musicians Sean Payne, Nick Power, Bill Ryder­Jones, Martyn Campbell and Riley Broudie.

He is currently writing and recording the first Lightning Seeds album for many years.

Since forming in 1997, Toploader have over two million album sales to their name and a string of top 20 hits both home and abroad. Their debut album ‘Onka’s Big Moka,‘ sold over one million copies and remained in the Top 5 of the UK album chart for over six months earning them 4 Brit Award nominations.

In 2000 the single ‘Dancing in the Moonlight’ became a global hit spending over a year in European Airplay Charts transforming Toploader into a household name. In 2013 the same track re-entered the Top 40 for three weekends topped the 10,000,000 hits mark on Youtube, an incredible thirteen years after it was first released, cementing it as one of the biggest songs of recent times.

Their second album ‘Magic Hotel’ reached number 3 in the UK Albums Chart and saw Joseph Washbourn (singer), Dan Hipgrave (guitar) AND Rob Green (drums) embark on the biggest tour of their careers playing to over 100,000 people in the UK alone.

In 2013 Toploader released two singles ‘Turn It Around,‘ co-written with Eg White (Adele,James Morrison) and produced by Andy Green (Keane, Scouting For Girls) and ‘This Is The Night,‘ produced by Tim Bran (London Grammar). Both tracks were excellently received by the press and gained strong support with BBC Radio 2 with placements on the ‘A’ Playlist. ‘This Is The Night’ gave them their first No.1 in the Radio 2 Airplay Charts.

With a reputation as a genuine crowd-pleasing live band Toploader have backed the likes of Paul Weller, Robbie Williams, Noel Gallagher, Tom Jones, Simple Minds and Bon Jovi, w​here they became the last British band to play the original Wembley Stadium. They have also appeared at a host of festivals including Glastonbury, V-Festival, T In The Park and Chris Evans’s CarFest.

To celebrate their 10th year anniversary and 30 years since The Beautiful South released ‘Song For Whoever’, The South feature as part of the Fi.Fest 2021 completing the line-up.

The South are an impressive 9 piece band who feature former members of The Beautiful South including singer Alison Wheeler and lifelong sax player Gaz Birtles.  Since Dave Hemingway, the original singer, left the group

at the end of 2016, Gaz has moved across to front the band with Alison and taken on vocal duties. They play the songs made famous by The Beautiful South and bring back the full flavour and arrangements with this

After a successful year of touring the theatres and festivals of the UK up and down the country, The South are keeping alive all those timeless songs -  A Little Time (the number one single), Perfect 10, Rotterdam, Song For Whoever, Old Red Eyes Is Back, Good as Gold, Don’t Marry Her plus many more singles and album tracks as well as a few choice South originals.   All performed again live, these songs span an impressive 20 year career starting way back in 1989!

Come on!  Let’s Carry On… Regardless!

We will have all your food and drink needs covered with multiple Bars and many food stalls covering a wide range of tastes available for you to try!

The KidsZone is again an entire event in itself!  Designed with fun and imagination in mind, the KidsZone keeps curious minds occupied with everything from a creation area and role-play fun, to theatre shows and a soft play area for the little ones. Experienced children’s groups, many from the local area, bring their talents and enthusiasm to the zone to give our Fi.Fest families a fun-packed day.

Creation Station: an award-winning national brand with three fun crafts for children to make and take home as souvenirs!

·         A Soft Play: a special undercover area for all those little ones to enjoy.

A festival not to be missed!   Save the date in your diary.