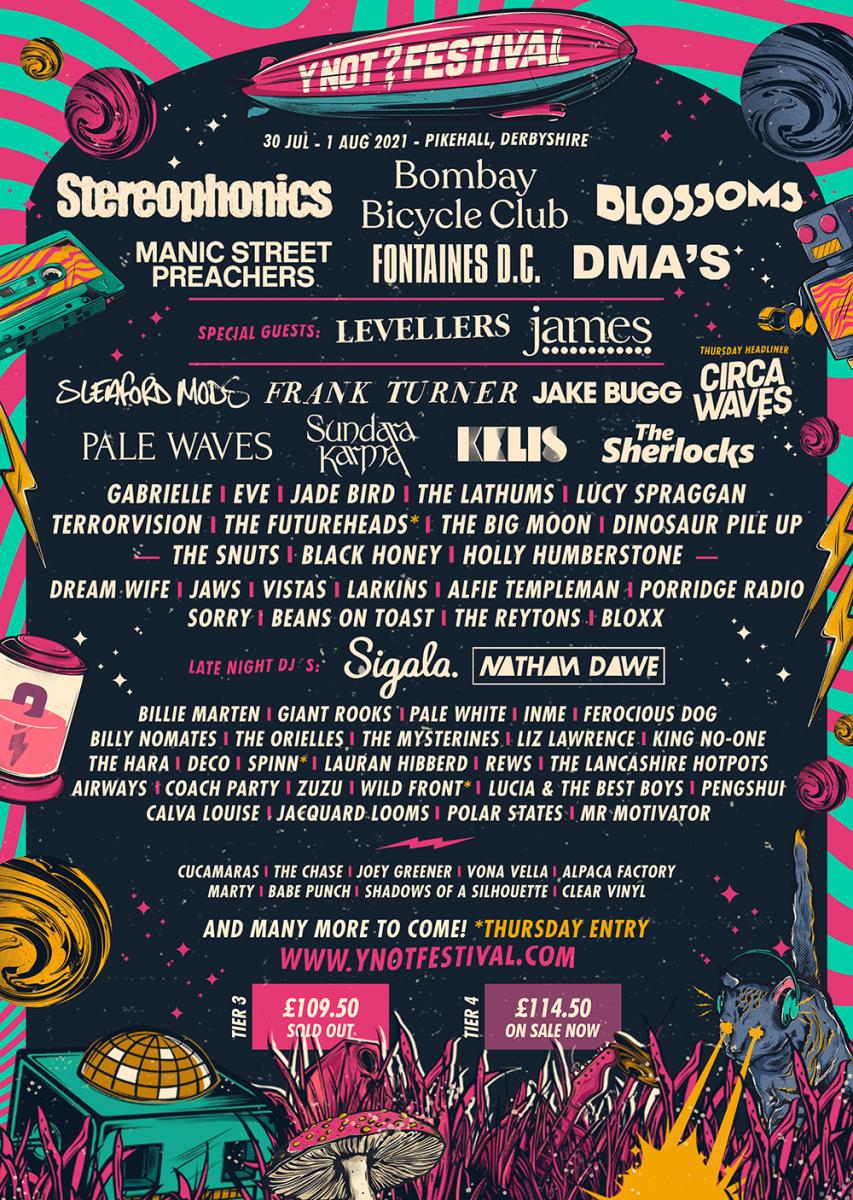 Y Not Festival 2021 Line Up Announced

Y Not Festival is back in full force for 2021! The North’s essential music festival returns this year, Friday 30th July - Sunday 1st August, to bring fans amazing three days of music from the UK’s next generation of talent to the treasured legends, with headliners Stereophonics, Bombay Bicycle Club and Blossoms plus many more. Tier 3 weekend tickets have already sold out, with other tiers selling out fast.

Opening the weekend on Friday night are one of Britain’s best live bands, Stereophonics. An unstoppable force in the UK’s alternative rock scene, Stereophonics have stood the test of time, releasing 11 albums over 3 decades and accumulating a massive 7 Number 1s among them. Expect to hear all their huge hits and so much more when they grace the stage on the first day of Y Not.

Stereophonics founding member Richard Jones says, “If the last time we played Y Not is anything to go by this year’s festival will be great. In 2017 the rain couldn’t dampen the spirits of the crowd who were up for a good time. I remember watching Slaves and Jake Bugg who were both on form. After the year everyone has been through, I’m sure it will be a memorable weekend for everyone!”

Bombay Bicycle Club return to Y Not for the first time since 2009 as our Saturday headliners.  Since that first appearance the band have released four Top 10 albums including recent Top 5 album Everything Else Has Gone Wrong. After a period of time focusing on solo endeavours, the band have returned with a bang, where they will no doubt pick up where they left off with a spectacular live show. We can’t wait to welcome them back!

Indie-pop outfit Blossoms make their Y Not headline debut on The Big Gin stage on Sunday night. The quintet from Manchester broke through back in 2016 with their hit self-titled debut record, which earned them a Mercury Prize nomination the following year. Their second album Foolish Loving Spaces was released just last year, hitting the No.1 album spot. Get ready for an energetic show, packed with fan favourites including early tracks ‘Charlemagne’ and ‘Honey Sweet’, plus newer material ‘Your Girlfriend’, ‘The Keeper’ and ‘If You Think This Is Real Life’.

Blossoms frontman Tom Ogden notes, “We can’t wait to headline this year’s event. Y Not was the first festival I ever went to in 2012 so to be back there headlining is really quite surreal. It’s going to be a very special night.”

The iconic names on the bill are endless, from Welsh rock legends Manic Street Preachers  to rap royalty Eve to the universally acclaimed indie outfit Sundara Karma, post-punk duo Sleaford Mods, NME Under the Radar winners Pale Waves, stand-out songwriter Jade Bird and special guests James & Levellers. They are joined by Jake Bugg, Gabrielle, Circa Waves, Kelis, Sigala, The Sherlocks, Lucy Spraggan, The Futureheads, Terrorvision, Dream Wife and many more to round out one of the biggest music festivals in the North.

The fun doesn’t stop at music either, Y Not Festival makes sure that there is something for everyone, from families & children to late night indie lovers. In addition to the family camping area, our family zone will offer days of fun for children with all day games and magic shows and many more family activities.

Jason Oakley, Managing Director at Y Not Festival, says, “After a tough year for live music, there’s finally some light at the end of the tunnel and we can’t wait to welcome everyone back to  Y Not Festival for the celebration we all deserve. We’ll be bringing our most exciting line-up yet with three explosive headliners, Stereophonics, Bombay Bicycle Club and Blossoms as well some of the UK’s rising stars like Jade Bird, The Lathums, Holly Humberstone and so many others. Thank you for sticking with us and we can’t wait to see you all there.”

About Y Not Festival

Back for its 15th edition, Y Not festival will take place in Pikehall, Derbyshire on Friday 30th July - Sunday 1st August. Since 2005 when it began life as an overspilling house party in the deepest, darkest Derbyshire; Y Not has stayed home grown and true to its roots. With panoramic countryside views, a fully stocked bar of local ales, a mouth-watering selection of food and more live music than you can shake a stick at… all you need to bring is yourself, some wellies and a killer fancy dress outfit.

Tickets are on sale now at: www.ynotfestival.com

Rachel Redford to star in Cat Goscovitch’s A Russian Doll