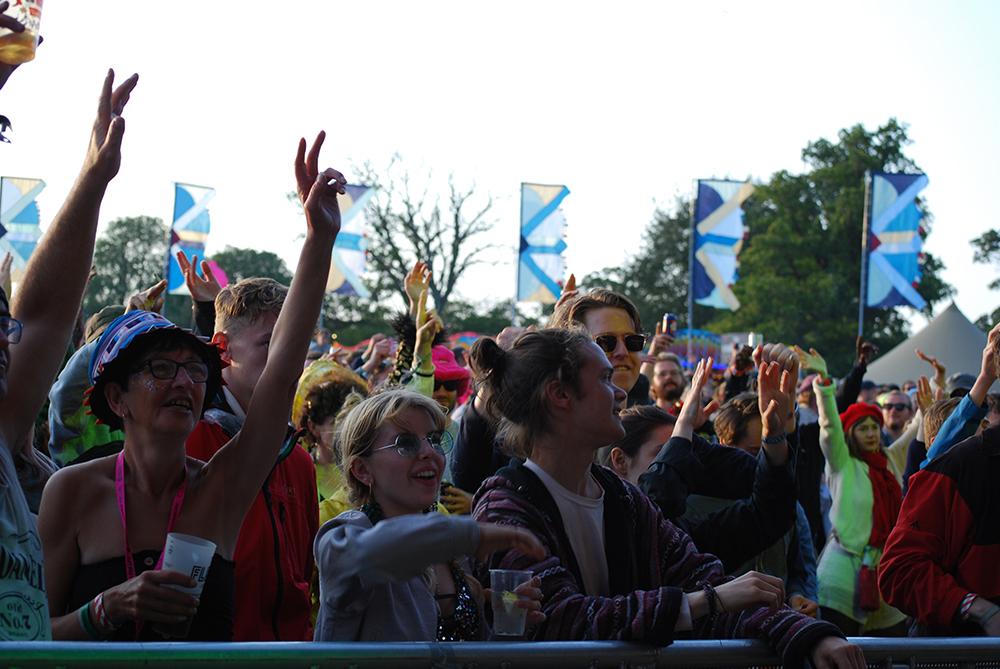 Oh my goodness, it was good to be back.  I had felt slightly apprehensive after a period of time with minimal social opportunities to be going to a festival with thousands upon thousands of other people.  While the weather held up it was magnificent though.  When the downpour came, I was unfortunate enough to be trapped in the Veuve Clicquot tent.  It’s a hard life being a reporter, trust me.

This was the first year for Wilderness under the new management of Festival Republic and it was clear that there are some teething problems to get through going by some of the feedback on social media.  It must be hard to organise and put on a festival in the post Brexit and (hopefully) late Covid period but they made a good fist of it.

The festival has always been more Talking Heads ‘I’m wearing fur pajamas’ wild than Bow Wow Wow’s ‘Wild In The Country’ & leaving it all behind (You’re showing your age!  Ed).  There was plenty of boho glamour on show as usual, glitter, velvet coats, elaborate headpieces or, as is also a Wilderness feature, no clothes at all.

After almost two years of shutdown and no gigs, it was joy to celebrate.  Loyle Carner, headlining the Friday, enjoyed playing again but said that he envied the thrill of being down in the crowd.

Saturday was the day of the downpour but it didn’t dampen people’s enthusiasm to get out and enjoy themselves.  Some ran for cover but others would not be stopped and just kept on dancing in the monsoon.

The headliner that evening was Jamie XX who played a great set.  He followed Bicep though and it seemed a strange line-up choice to have four hours of watching guys standing in front of consoles.  The young crowd loved it though.  As did the actor Toby Jones who was down at the barrier at the front of the crowd.

Toby Jones had also been part of the troupe reading Letters Live earlier in the day.  Now a staple of the festival, the letters were funny, inspiring and moving.  Amanda Abbington able to channel Marge Simpson in a letter to Barbara Bush being one highlight.

On Sunday, Simon Amstell tried out some new material at The Forum for his forthcoming tour ‘Spirit Hole’.  Simon was his usual disarmingly frank self which led to some very uncomfortable moments for those in the tent with young families.  If you get the chance to go and see him, you should, but do not take young children.  Unless they find routines about Berlin sex clubs very funny.  Then, by all means…

Sunday began to close out with veteran reggae DJ David Rodigan giving a potted history of that genre via an orchestra and special guests, including Bitty McLean (more music references from last century, kids!).

The crowd were jumping after this and lapped up the closers, Rudimental.  Call me old fashioned (We will after all those musical references.  Ed) but for me this is what a festival needs.  Dynamic, high octane headliners who know how to put on a show.  Great tunes, tight musicians and a bit of rebellion.  After being told at the end of their set that they could not do another song, frontman Locksmith tells the adoring crowd they are going to do one anyway.  They fire up again and literal fireworks go off, rockets exploding above us as the crowd and Rudimental go wild.

Just what the doctor ordered.