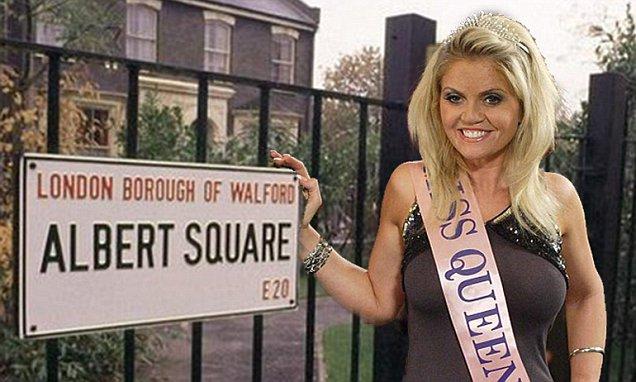 Hey everybody it’s Tyler here. I am doing a deep dive into Eastenders’ most iconic characters and one of my favourites, Samantha Mitchell, and who plays her better.

Danniella Westbrook made her debut as Sam on 19 July 1990 after following her Brothers Phill and Grant.

Sam’s first major storyline was her relationship with Ricky Butcher which the Mitchells didn’t approve but Sam and Ricky decided to elope in Gretna Green in 1991.

They get married despite Peggy, Grant and Phill trying to stop the ceremony, and Peggy admits defeat and attends the blessing in Walford one month later.

She fails to earn schooling qualifications but gains attention after winning the title Miss Queen Vic which Sam believes she can make it as a model.

When attempting to get a portfolio done by a professional photographer he persuades her to do a topless shoot and his photos get published in a magazine, which causes problems in Ricky and Sam’s marriage.

Sam gets bored after a year of marriage with Ricky, and begins falling for Clive.

In 1993, after realising her marriage is over, she leaves Ricky and Walford to become a cruise ship holiday rep.

In 1995, Sam returns to Walford after being found by Phill and Grant in Spain with David Wicks, and they force her to come back.

She had tried to build her modelling career in the Spanish sunshine which sadly didn’t work out, and she ends working in a bar.

Back in Walford, Sam continues her affair with David Wicks but doesn’t work out and she attempts to come in between Ricky and Bianca.

During her time there, she worked behind the bar at the Queen Vic, which by this time Peggy is the Landlady of.

Soon after in 1996, Sam meets a Spanish man and holiday maker named Guillermo and he offers her a chance to move to Spain with him. Sam doesn’t turn down the opportunity and leaves in March of the same year.

Sam returns to Walford in 1999 and starts a relationship with Beppe Di Marco, but she takes thing a tad more seriously than he did.

Later she found comfort in Steve Owen but he was with her to make Mel Healy jealous. So then, a heartbroken Sam leaves Albert Square in 2000.

During this time Danniella Westbrook had personal problems and took time out to look after her two children and become a housewife. During her time away, Sam was played by Kim Medcalf from 2002 - 2005.

In 2002, while holidaying Peggy catches Sam (being played by Kim Medcalf) working in a bar and she moves back to Walford and works in the Queen Vic.

In 2004, Sam marries Andy Hunter but the marriage wasn’t to last and they divorced in 2005.

Unfortunately for Sam, she ends up involved in the who dunnit murder of Den Watts, and was ultimately charged for murder, but it turned out that his wife Chrissie was the killer.

This becomes daunting for Sam and she flees to Brazil in 2005.

Danniella returned to her role as Sam in 2009, after Phil meets her in Brazil and comes back to London using a fake passport. This riles Bianca and reignites their feud. Ricky reignites his feelings for Sam and a jealous Bianca calls the police.

Sam is arrested for trying to flee but gets released on bail after Ronnie pays the surety.

Ricky and Sam become engaged but she has an affair with Jack Branning.

Sam is arrested after turning herself into the police implicating Peggy in Archie Mitchell’s murder for revenge and serves 18 months in prison.

Peggy visits Aam in jail but Sam disowns her and the Mitchell family name.

During a later visit, Peggy realises Sam is heavily pregnant but is not sure who the father is. Sam gives birth to her son Richard in 2010 and was going to give him up for adoption, but reconsiders to reconcile with Ricky.

It turns out the baby was Jack Branning’s not Ricky’s as Sam claimed, but Ronnie does not want Sam or the baby near Jack.

She struggles with parenting and relies on Peggy and Minty. Later in 2010, Sam leaves Walford with Ricky and moves to Portugal to live with Grant.

Sam returns in 2016 with Richard now known as Ricky, to attend Peggy’s funeral but after the funeral Sam leaves Ricky with Jack, and Sam leaves Albert Square which was the last time Danniella played the character.

In 2022, Kim Medclaf reprised her role as Sam, after learning that Phill was in jail and was told by Phil to look after the family business while he serves time.

Sam eventually reunites with her son Ricky and explains why she left him with Jack.

In my opinion I do like both actresses. Danniella really played Sam quite well, despite the negativity, and she definitely brings a comedy feel to the role.

Kim plays the role really well and is the better choice for this moment, and it will give a chance for viewers to see what Kim can bring to the table.

Danniella has always supported Kim playing Sam, and even sent her praise this year .

I do not watch Eastenders regularly but I will watch it when I get the time, for Sam as she is my favourite Mitchell and I love how savage she can be.