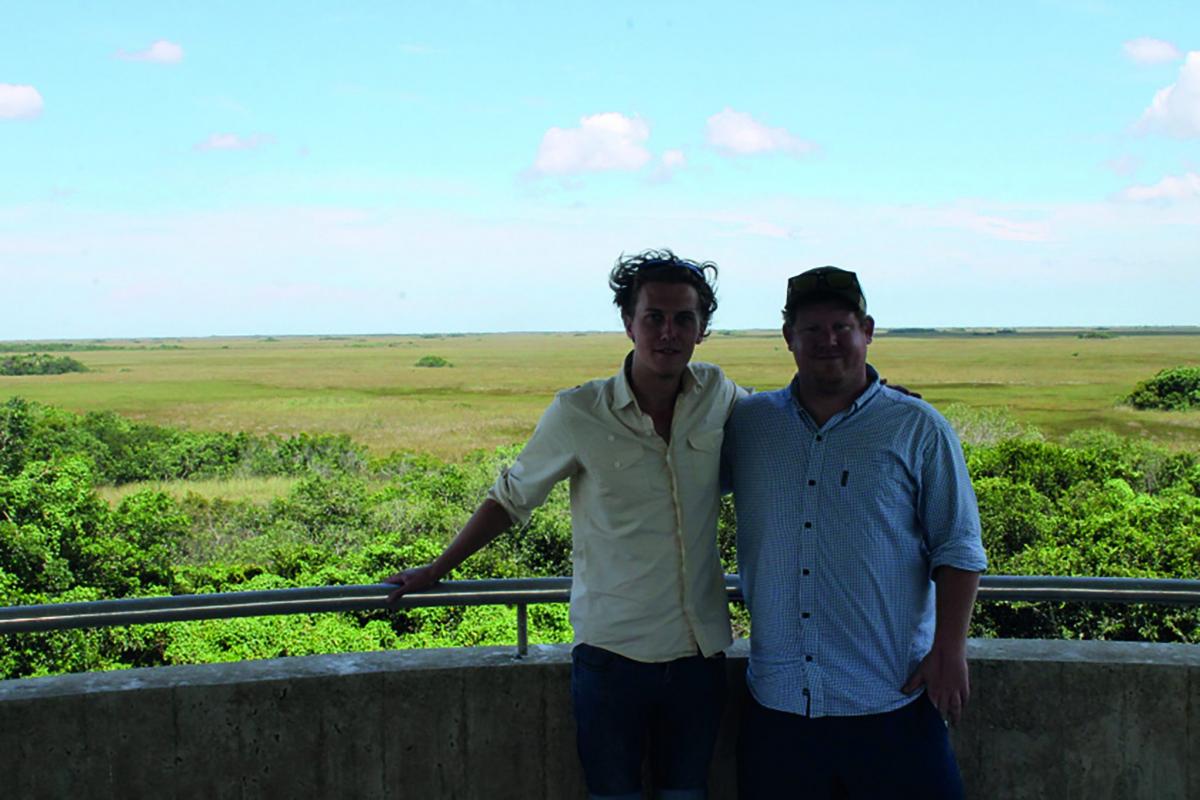 In the sixth and final of a series of articles Tobias Baughan blogs about a life-changing trip to Mexico. We join him as he’s on his way back to blighty with a two week stay in the US.

The American I’m speaking to is very nice, asking lots of questions about me coming to his country. He’s feeling so nice, as we stand facing each other in the arrivals section of Miami airport that he selects me for special treatment, ‘THE VIP SERVICE’ he announces, leading me to the front of the passport queue for a further conversation with his friend, who tells me to get against the wall.

Shortly after I’m taken to the arrivals area where they keep me and 40 other VIP guests so we can play ‘name bingo’. To play name bingo you have to sit in the room, wondering what might happen to you and why you’ve been selected for name bingo while you wait for your name to be called. When your name’s called if you’re a winner you get to leave the room and go on holiday to America (which is a good prize) but if not you have to go home. After seven hours I win the top prize and get to go to America, as a VIP. They tell me if I stay longer than the two weeks I said I would I’m bad at the game. Events since the time of this incident have shown that I can follow those complicated rules.

...In my head this entire incident plays out like the start of a detective novel. An Englishman would be detained at an airport for no good reason, we would surmise at least from a series of blog entries he’d written (shown in montage) which would have us label him as harmless if slightly eccentric. But after they let him go an FBI agent shows up who thinks he might in fact have been an international criminal travelling under a false alias and made to look like a skinny person from the English countryside by a disgraced plastic surgeon…

We leave the airport in my English expat friend Darren’s BMW soft top borrowed from his mother in law, so who says they’re all bad? ‘I do,’ says Les Dawson, popping his head out from between the back seats and making a funny face, escaping to a nearby restaurant on a pogo stick.

We blur through the heat haze of the next few days drinking on the rooftop of a hotel we are not staying at by the sea front; take a turn the wrong direction down the freeway and get helped out by a remarkably unsuspicious policeman; tip correctly in dive bars; drive off (the right way this time) into the open, watery expanse of the Everglades: an endless marsh filled with crocodiles and anacondas, which ecology boffins will tell you is actually a river. We make a circle on a tour bus through the landscape. The tour guide tells us how the only person who was ever attacked by a crocodile here was saved by their mother, who freed her child from its jaws with her bare hands.

‘Think about that before you challenge your mother in law to a mud wrestling contest,’ says Les Dawson, dropping his head below the canopy of the tour bus, activating his jetpack and flying off towards the gift shop to buy some key rings. The ‘we’re stupid and out of our depth but English so have good accents’ card proves handy again soon, not to plead for our lives with a crocodile during this visit thankfully, but because we have neglected to bring the demanded change with us to the huge bridge that crosses the ocean towards Tampa on the freeway. Whoever said the best things in life are free was certainly proven to be right again.

...With no leads on where the international criminal is the FBI are stumped. At least until they see someone matching his description in a BMW soft top. After tailing the car they catch up at a toll bridge, but don’t have any change to pay the fare. No one is English so they don’t have a valid excuse for not knowing to bring it. They show their FBI ID cards to the toll keeper. ‘We don’t take card,’ he says…

Thankfully there’s not a croc in sight a few days later as I head out once more into the Floridian wilderness for some family fun with Darren and Annie, my transatlantic bosom buddies. We kayak along five miles of gentle water in which salty and fresh water mingles. This means there’s no crocs shopping for a diet meal of Tobias and instead we are treated to the blissful company of sleeping manatees floating meditatively below the river’s surface, raising their snouts above the water intermittently for a noseful of air, retreating again like wet stones beneath the unhurried current…

As always, however, trouble is near, poking its head into the room where I sit with my elbows and kneepads, surrounded by health and safety signs. With my aversion to news, I’d neglected to notice that a hurricane has been predicted to sweep over Florida and to this end we also spend a day or two in expectation that its stormy aftermath will sweep over us, but in the end I emerge both unmoistened and uneaten.

It’s the last few days of my trip. I go to rent a car at Sixto to head to Key West. Things get off to an interesting start when I get into the car which turns out to be an automatic. Turning about face I head back inside to check that ‘D’ means drive ‘S’ means stop and ‘R’ reverse, because I’m only one foot from a wall, and wouldn’t want to have to pay a fine before I’ve left the car park… Reassuringly however it turns out my instincts were right and I am shortly on my way. Hey, I might have scraped the side of the car against some metal fencing, but this almost brand new car looks even better with some go faster stripes; a fact testified later by Sixto who don’t fine me… (Thank you Sixto)

Having come mildly close to sustaining some kind of injury I carry on down towards my destination, the radio on. With the Gulf of Mexico on one side and the Atlantic on the other I couldn’t be anywhere else but where I am. During the drive I don’t stick to the speed limit, but keep to the pace of the traffic, which is usually higher. In a way by doing this, I feel I am following the real rules even better than if I had not technically been breaking the law. At one stage when two cars go even further over the limit to overtake another vehicle a Dodge Viper suddenly flashes police lights that had not been visible before, an undercover cop speeding past in turn to overtake both offending vehicles and pull them over. Not for the first time I feel like I’m in Grand Theft Auto.

...Why would an international criminal drive an economy car from Sixto instead of a premium model? The FBI ask themselves later, while trying to cook spaghetti in a toaster. One of the FBI guys, who used to take other boys’ lunch money at school gives another a dead arm and someone else comes away with a 5/10 chinese burn, which isn’t a nice thing to do to someone. Their parents have to get involved…

The next day I visit the Hemingway Museum (one of his old houses) which is great, and made more so by the guide who almost bursts into tears when he speaks at the end of Hemingway’s tragic early death, as if it had just hit him now, after doing the same talk 10 times a day, five days a week, for what must be some time, 54 years after Hemingway died. I’m not joking. He was but one of many excellent tour guides and public speakers I encountered during my time in America.

At the end of the film everyone lives happily ever after, and the FBI agents give up their jobs and get nice hobbies, like knitting and flower arranging, which can be good fun if you’re into that sort of thing… THE END.