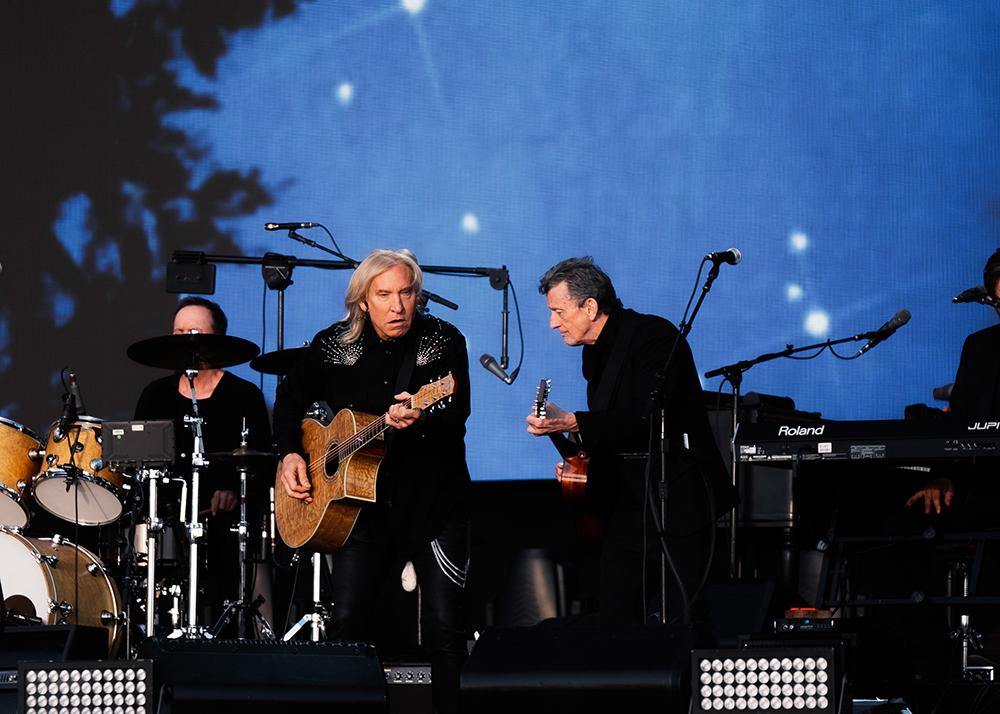 The Los Angeles band - comprised of Don Henley, Joe Walsh, Timothy B. Schmit - were joined on stage by Vince Gill who completed the line-up for the evening. Together, they took to the Great Oak Stage under a sunny Sunday evening sky to kick off their two-hour long set - and brought the first weekend of fantastic live music to a close at London’s Hyde Park.

Treating the joyful crowd to an immense catalogue of hits - including Take It To The Limit, Heartache Tonight and Life In The Fast Lane - Don said: “We are glad to see your smiling faces. We are glad to be back. We’re glad you’re back. Our mission this evening is to give you a two-hour vacation from all the headlines and the chaos that’s happening in the world… So sit back, relax and enjoy the music.”

Later in a poignant moment - with a picture of Eagles founding member Glenn Frey on the screen - Don introduced Glenn’s son, Deacon Frey. Deacon joined the band to perform vocals and guitar on Peaceful Easy Feeling and Take It Easy.

He smiled: “We have a wonderful surprise for you this evening. Would you welcome please, Deacon Frey.”

A tremendous encore brought the show to an end with a show-stopping rendition of Hotel California, Desperado and lastly Already Gone, for which the legendary Tennis ace and Eagles superfan John McEnroe appeared to surprise the punters!

Vocalist Don Henley has been fronting the group since its conception in 1971. Joe Walsh and Timothy B. Smith have also been a part of the Eagles’ story since the 1970s, while Vince Gill has joined the band on stage since 2017.

Robert Plant and Alison Krauss were second on the bill for the Great Oak Stage. The pair have been touring Europe with songs from their most recent album, Raise the Roof, and chose to make BST Hyde Park their London date. The pair performed a selection of their much-loved tracks from their current and previous Grammy award-winning album Raising Sand. Their set included Can’t Let Go and Trouble With My Lover, while Alison also picked up the violin for Please Read The Letter.

Meanwhile Pennsylvania-born soul-pop singer, Patrick Droney, opened the Great Oak Stage for the day. His raw and uplifting vocals drew in the crowd in anticipation of the mind-blowing country festival line up ahead. Singer-songwriter, CAM, followed - this being her only live date in Europe before embarking on a two-month tour of North America. She told the audience, “Thanks so much for having us, This has been such a beautiful memory.”

The day kicked off on the Hard Rock presents Rainbow Stage with singer-songwriter Sophia Alexa - followed by country-folk quartet The Wandering Hearts, who impressed the audience with their rousing choruses. Country singer-songwriter Morgan Wade treated an excited crowd to her incredible debut, Reckless, including tracks Wilder Days, Last Cigarette and Take Me Away.

A wonderful end to the third day of music at this year’s American Express presents BST Hyde Park, with a special focus on the best country-rock music in the world.

Details released for the Swindon event that will make audiences want to 'Shout!'