T-Rex furious after being kicked out of Extinction Rebellion 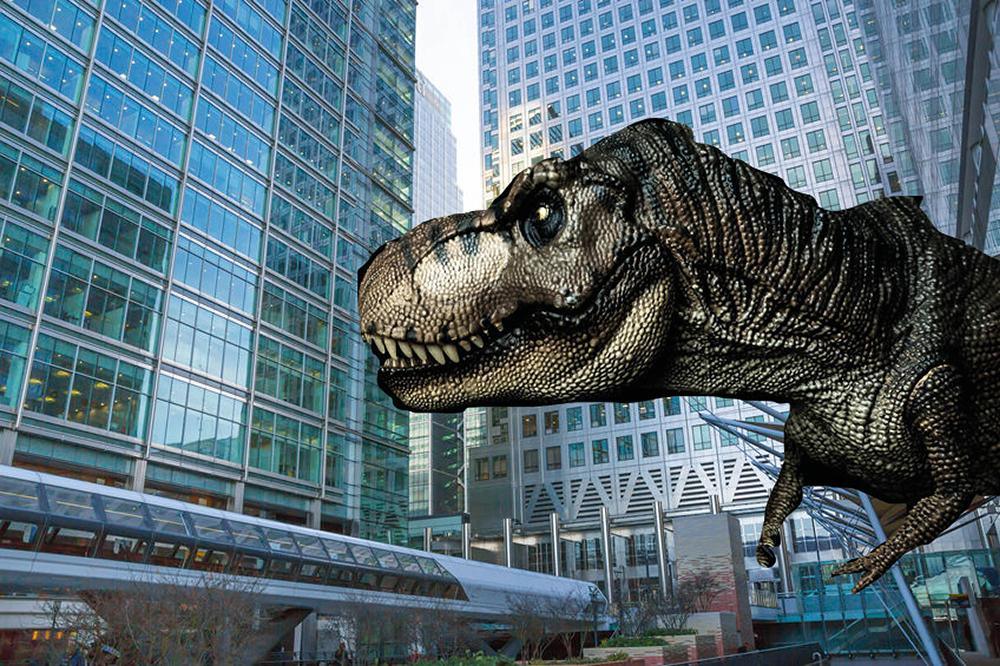 Former Extinction Rebellion founding member Tina the T-Rex was incandescent with rage yesterday, following her abrupt dismissal from the environmental protest group, and was taking her fury out on the skyscrapers of Canary Wharf until the wee small hours this morning.

Tina had been the brains behind many of their recent high profile successes, like that time they went camping in London, and that time they waved some signs outside parliament.

Yet it was decided yesterday at the Extinction Rebellion Club Treehouse, located at the bottom of George Monbiot’s Mum’s Garden, that Tina ought to be kicked out of the group because she had become ‘problematic’.

A spokesperson for the Group, Lisa Pond, said: “It’s with great sadness that we couldn’t continue working with Tina. But our whole aim is to avoid a sixth mass great extinction event, and unfortunately Tina, and her species, is emblematic of one of the most famous mass extinctions. It’s just not a good look for us at this time.”

It’s understood Tina reacted furiously to news of her dismissal, eating several members of the group before deliberately trampling down Mrs Monbiot’s picket fence as she rampaged off to cause chaos in London’s Docklands area.

And it wasn’t until shortly after 6am this morning that a trained hostage negotiator, speaking via megaphone from a nearby helicopter, finally coaxed Tina down from the top of the HSBC building.

Luckily, due to lockdown, barely anyone was in the Canary Wharf area at the time of her rampage, so there were no injuries. Tina later apologised for all the mess and destruction caused during her 12- hour tantrum and agreed to help emergency services sweep up all the mess.

Once calm, Tina put on her reading glasses and read out the following statement: “I remain saddened that things have ended this way-  kicking out an elderly female dinosaur is no way to address criticisms of diversity. Besides, no one knows more about extinction than someone who has lived through three mass extinction events before. And only me and Michael Gove can say that. And I don’t see him doing anything to help.”