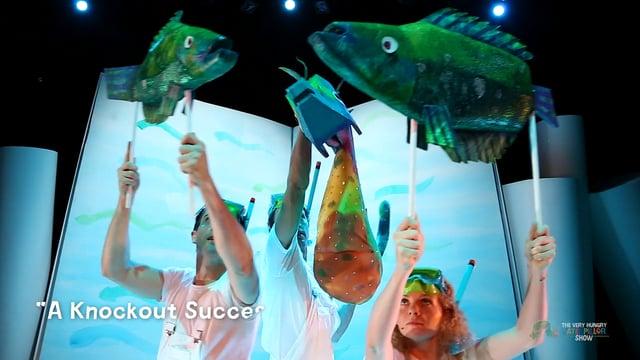 After runs in the West End and New York, one of the most iconic characters in children’s literature will be wiggling his way to Swindon this month, when The Very Hungry Caterpillar Show plays at the Wyvern Theatre for two performances only on Sunday 21 May.

Eric Carle’s books have captivated generations of readers with their iconic hand-painted illustrations and distinctively simple stories, introducing millions of children to a bigger, brighter world, and to their first experience of reading itself. His best-known work, The Very Hungry Caterpillar, has nibbled its way into the hearts of millions of children all over the world.

It has been translated into 62 languages and sold over 43 million copies, remaining one of the top ten bestselling children’s books of all time. Since it was first published in 1969, Eric Carle has illustrated more than seventy books, most of which he also wrote, and more than 132 million copies of his books have sold around the world.

Jonathan Rockefeller said: “Eric Carle has created a deceptively simple, yet sophisticated introduction to reading through the magic of his iconic collage illustrations and memorable stories. I still have my original copy of The Very Hungry Caterpillar, and to this day can’t help but be enthralled by the stylish and captivating art in Eric’s work.

“For many in the audience, this show will undoubtedly be their very first time at the theatre, so we have been very conscientious to ensure that we have been absolutely faithful to their favourite characters. Our goal is to take the audience on a truly memorable journey, bringing these stories to life through the magic of puppetry, movement and stagecraft. We have a menagerie of larger-than-life puppets, bursting with vibrant colour - it’s astonishing to compare the original illustrations to the puppets and how exact they are.

“When our puppets appear on stage the atmosphere is positively electric - parents and grandparents are swept up in nostalgia, and you can hear peels of laughter and squeals of delight as joy fills the theatre. We can’t wait to bring The Very Hungry Caterpillar to London!”

Eric Carle added: “I am delighted my friends in the UK will soon be able to share the same enjoyment I felt when seeing my characters come to life in the beautiful and enchanting Broadway production of The Very Hungry Caterpillar Show.”

The Very Hungry Caterpillar Show first premiered in Australia in 2015 before opening in New York at the Acorn Theatre in January 2016. It is currently nominated for a Drama Desk Award for Unique Theatrical Experience, and returns next month for a second run due to popular demand. The New York production broke box office records and attracted celebrities with families including Chelsea Clinton, Emily Blunt, Neil Patrick Harris and Diane Sawyer.

For ticket enquiries, head to www.swindontheatres.co.uk

Hawkwood's Seed Festival are crowdfunding to grow the 2017 event