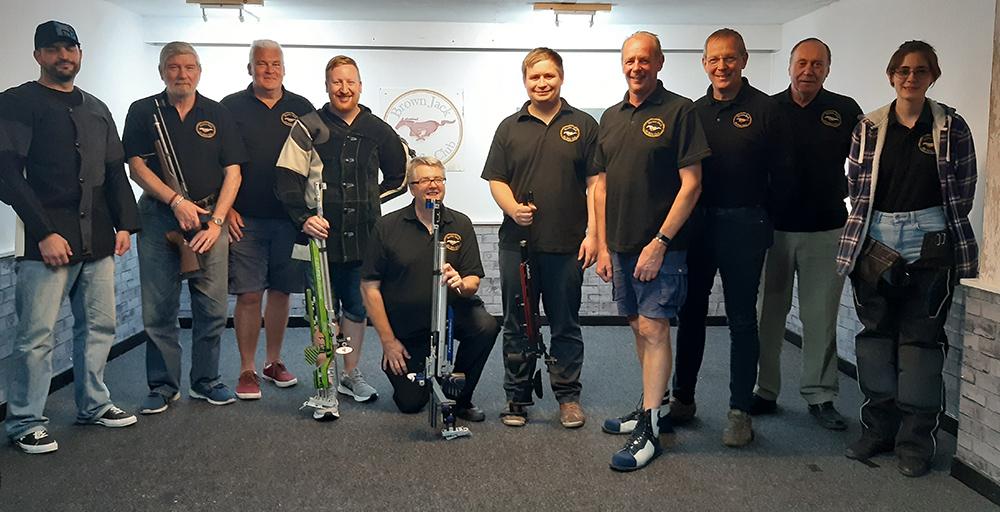 The Ocelot visited members from the Brown Jack A and B team, who gather every week at the North Swindon Club off Cheney Manor Road.

The Brown Jack shooting club meet every Tuesday and Wednesday evening at 7pm until around 9:30 or 10pm for a practice shoot.

People of all abilities and newcomers are welcome, but the recommended starting ages are 12 - 14 years, as members need to have the strength to hold a rifle.

Members are lent rifles and shooting gear, including specialised jackets - if they wish to use them. The purpose of wearing the equipment is to aid balance and weight distribution, in order to aim and shoot better.

The Brown Jack A and B teams welcome people with disabilities and accomodate different shooting styles. For example, chairs can be used and tripods to help balance a rifle are allowed.

Membership for the year costs £15 for over 18s and £5 for under 18s. An extra cost of £2 for every practice helps to cover the free use of the equipment and the pellets and scorecards supplied.

Mark Dobson, the Brown Jack club and A team captain said: “We like to try and make our practice and competition sessions fun. We take the sport seriously but try to keep the fun and friendly element of it.

“We’re friendly and easy-going. I think of everyone here as my Brown Jack family and I think that is what other people will find by joining not only us, but any club that is part of the Swindon & District Air Rifle League.”

Full safety training is available on first visit and the handling of the rifle and correct stance will be explained. Each member shoots from either side of a screen partition at their scorecard, held at a distance of around 6.2 metres.

Lucy Almond, who was just 14 when she started shooting with the Brown Jack B’s, has now taken over as the team’s training coach.

The 18-year-old said: “I started shooting with the Brown Jack B team for D of E. I used the air rifle shooting as my chosen activity element of the award scheme.

“It will be really cool to teach the new generation of shooters – especially for someone like me who was quite a young shooter when starting out. We’ve got a good number of young shooters coming in so it’ll be great to bring them into our league. Our league doesn’t have as many young shooters as some of the others.

“It’s going to be a privilege to train new members.”

When league competitions start again in September, they will take place every Wednesday from 8pm until around 10:30pm. Scores from competitions will be added to the Swindon & District League leaderboard on the website.

Howard Millard, Secretary of the Swindon & District League, said: “I’ve been in this role for three years and have been shooting for over 40 years. I prepare for all the competitions and attend a monthly delegate meetings. All the teams will send a representative and I take the minutes.

“We’ve got a chairman, a vice chairman and my partner is the treasurer. There’s only four of us on the executive team, so the league is basically run by the delegates. Although it’s run by our executive team, we listen and do what the teams want. It’s quite free and delegates can put forward their ideas.

“Every year we have the Swindon Open where we invite other leagues to come up to Swindon, or our Swindon members will go and visit their respective clubs.

“There’s lots of opportunities for people to get involved past just shooting for a team. We’re trying to encourage new members – especially some more of the youth. We have had a lot younger people join us recently but we are always encouraging more.

When asked what the draw for the younger generation of newcomers would be, Howard added: “It’s a nice social atmosphere and it gets people out and away from sitting at home in front of a screen. It’s a more traditional sporting activity and something a bit different. The league has been running since 1923!

“More members of the Swindon & District League would mean more teams. There’s all sorts of competitions, some just for the old rifles, some for new and lots of other categories.”

Mark Dobson was also keen to highlight the opportunities for members to get involved within the league committee.

He said: “We have meetings, and the committee changes up every so often and people will opt for different roles if they want to.”

The team say that the use of the North Swindon Club’s function room helps to create a welcoming atmosphere with an easily accessible bar. Food is available on Wednesdays with a small fee to cover costs.

Sandy Foster, B team Captain said: “I’ve been air rifle shooting for most of my life and this will be the third season I have been the captain of the Brown Jack B team.

“We’re just one big happy family and encourage anyone to join a Swindon League club and try their hand at rifle shooting.”

The Swindon and District Air Rifle League and Brown Jack Shooting Club have a social media presence. Members of the public can join the private and public groups and keep up to date with competition outcomes and team victories.

The Brown Jack Bs said team member Ken Goodchild has been known to write a nice match report each week that he posts to the Facebook page.

Mark Dobson added: “We like to promote everything we do on social media. We have a public group that people can look at and our private club page for just our members to post and interact through. We also like to celebrate our shooters if they get a good scorecard or win anything at our league competitions.”

Other local air rifle clubs within Swindon can be found at: http://www.swindon177.co.uk/

New research reveals Britain's bedrooms are 'bulging at the seams'

How To Improve Your Financial Literacy: A Beginner’s Guide