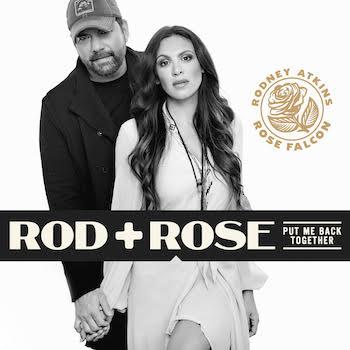 Rod + Rose Stun In Commitment-Filled ‘Put Me Back Together’

Curb Records duo Rod + Rose are nothing short of amazing in commitment-filled ballad, ‘Put Me Back Together,’ available now. Listen to the song HERE. The slow-burning track previews the couple’s forthcoming self-titled EP, releasing 28 Jan, 2022. Pre-Order/Pre-Save the collection HERE.

Although ‘Put Me Back Together’ was written by Caitlyn Smith, Trevor Dahl, Brenton Duvall, Johnny Price and Kiara Saulters and originally performed by electronic music trio Cheat Codes, featuring Kiiara, the lyrics read like the Cliffs Notes to Rose Falcon and Rodney Atkins’ real life love story. “To me, it’s a song about falling together instead of falling apart during difficult times,” shares Falcon. “2020 was a challenging year for us and most everyone we know, but we got through it. When life gets messy, we lean on, and into, each other. We aren’t perfect, and it’s not always butterflies and roses; but we stick together, and at the end of the day, we can laugh at all the crazy times we have been through.”

Together, Falcon and Atkins—married since 2013—are an unstoppable force in life, love and music. She was a rock ’n’ roll princess who was offered a record deal at 15 and has since written songs recorded by Faith Hill, Lady A and Eric Paslay. He is an established country voice and a working man’s songwriter who’s taken six No. 1 hits to the top of the charts. And for the first time, they’ve joined creative forces in an official capacity for Rod + Rose.

Rod + Rose have been singing side by side for years and share two sons: Ryder and Scout. Most recently, the duo co-wrote several tracks for Atkins’ latest album, Caught Up In The Country, whose Gold-certified title-cut, featuring The Fisk Jubilee Singers, set the record (at the time) for the longest-running single in Billboard Country Airplay history at 57 weeks.

Rod + Rose will share more new music in the months to come.

Stream or purchase ‘Put Me Back Together’ HERE. For more information, follow Rod + Rose on Instagram @rodandrose.

She was a rock & roll princess, whose first record deal was at 15 and whose songs have been recorded by Faith Hill, Lady A and Eric Paslay. He is the established country voice of multiple 4-week chart-toppers; a working man’s songwriter who understands how real people feel. Together they are Rod + Rose, the merging of lean writing and pure poetry, straight up country intertwined with a little bit of roots.

For Rodney Atkins and Rose Falcon—married since 2013—it’s the perfect merger of love, songs, life and the way two people from different places perfectly complement one another. In a world where differences often drive a wedge, these two use those things to create a whole that embraces it all. And they sound so good doing it.

Rod + Rose’s debut song, “Being Here, Being There,” released August 20 on Curb Records.

About Curb Records:
Celebrating 57 years in business, Curb Records is one of the world’s leading independent music companies. Owned and operated by Mike Curb since 1964, Curb Records has achieved 435 number one records, over 1,500 Top Ten records and charted over 4,500 total records. With over a half century in operation Curb Records has been influential in the careers of some of the biggest names in music, including: Tim McGraw, Hank Williams, Jr., Rodney Atkins, Lee Brice, LeAnn Rimes, The Judds, Dylan Scott, Sawyer Brown, Wynonna, Lyle Lovett, Jo Dee Messina, Hal Ketchum and Desert Rose Band, among many others. Today’s roster includes some of the top names across multiple genres of music. For more information, visit www.curb.com.

Get ready for a rocking Christmas at New Theatre Oxford