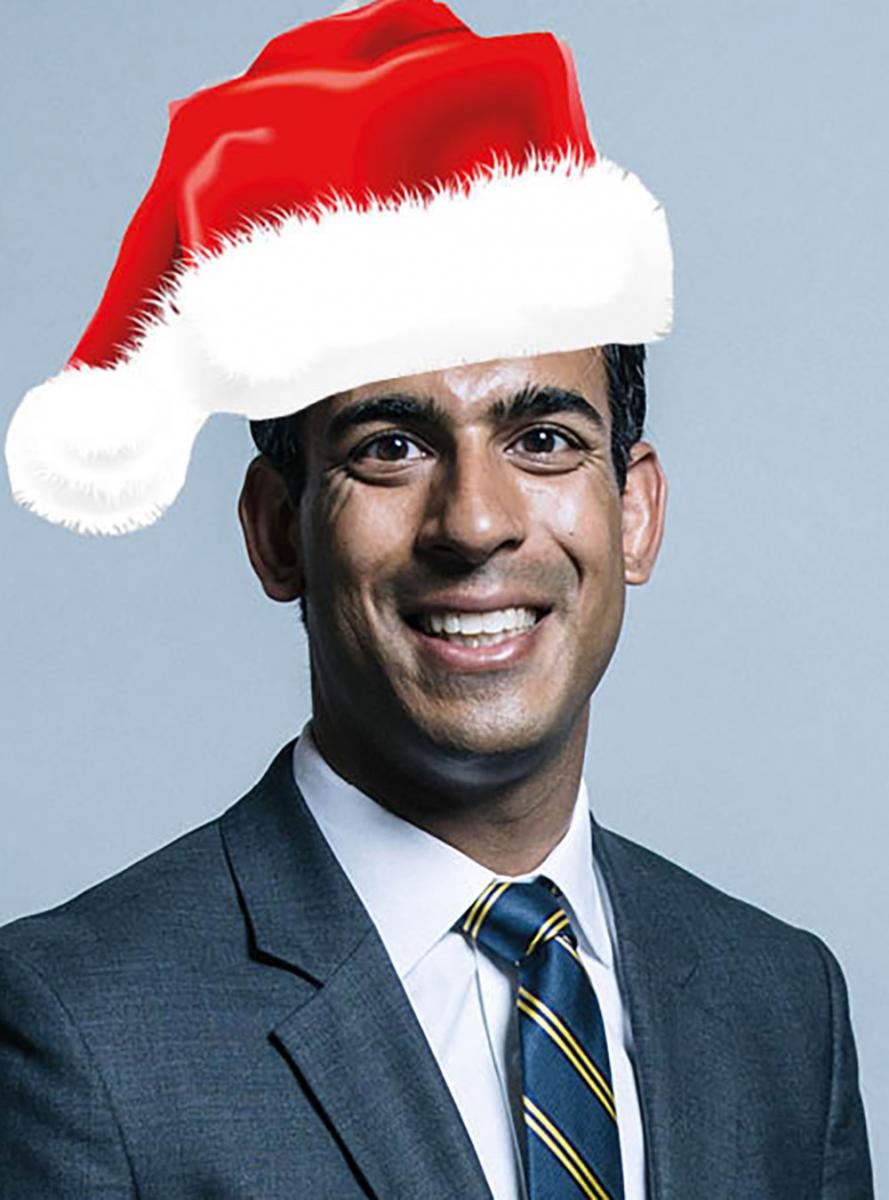 Following UK Prime Minister Boris Johnson’s announcements yesterday about a further six months of tightened COVID restrictions, the government is set to make a further announcement later that the Chancellor of the Exchequer, Rishi Sunak, is to replace Santa Claus this Christmas.

It comes hot on the heels of what was generally perceived as a ‘bad news story’  - or, ‘a Dom Cummings’ - by Ministers yesterday, and the Government is keen to make amends as quickly as possible with something they hope the public will support, and that unlike all their other promises they can actually make happen.

A Goverment spokesperson said: “The problem is we’ve got no money left. Ideally, we’d have Rishi offering something tangible and useful to the economically ravaged businesses of Britain, like an extension to the furlough scheme, or some targeted tax cuts, but a quick glance round the treasury vaults last night showed unfortunately the cupboard was bare, except for a dusty box of Christmas decorations that hadn’t been touched since Gordon Brown dressed as a giant Elf and hid beneath Blair’s desk to scare him.

“It was then that Boris came up with the brilliant idea that we could save millions simply by cancelling Santa’s planned visit this year, and have Rishi replace him instead.

“The plan would be to have Rishi, in a Santa hat, crash down the chimney during one of Boris’ telly addresses – you know, the ones where he’s at his big boy sit down desk – and have a brief, awkwardly scripted, Bing Crosby and David Bowie-type exchange of yuletide pleasantries.

“Rishi would then dust himself off, turn to the cameras and say , “Look. Boys, and Girls, of Britain. I ’m not saying it will be easy. There’ll certainly be a few bumps in the road ahead. And, yes, there will, sadly, be further deaths. But all you boys and girls out there know, if you work hard, follow the guidelines, then hopefully, together, we can come out of this with a brand new Vtech ‘Feathers & Feelings’ Peacock, or a ‘Botley 2.0’ the robot you can actually program. Cor!”

The idea of ‘Father Rishmas’ has been met surprisingly warmly in Whitehall circles. Deputy Chief Walnut Whip Jeffrey Blankitt said: “For some baffling reason Rishi Sunak, the man who gets his chequebook out every time he appears on telly, seems to be the only popular government figure.

“We’ve tried wheeling out all those heayy hitters we thought people would love – Matt Hancock, Michael Gove, - you know, well-bred school prefect types from rich successful families, but for some reason they never seem to poll as well with the general public”

The real Santa was not available for comment, but a North Pole Spokeself issued the following statement to the press: “We are disappointed the UK is going back on its word like this, and breaking the Santa Trade agreement, which had only just been renewed in January of this year, by this very Prime Minister.

“Nevertheless, we remain hopeful of striking a deal before the December 24th deadline, but warn the UK that punitive retaliation tariffs on all Candy Cane exports to the British Isles could be introduced if not.”