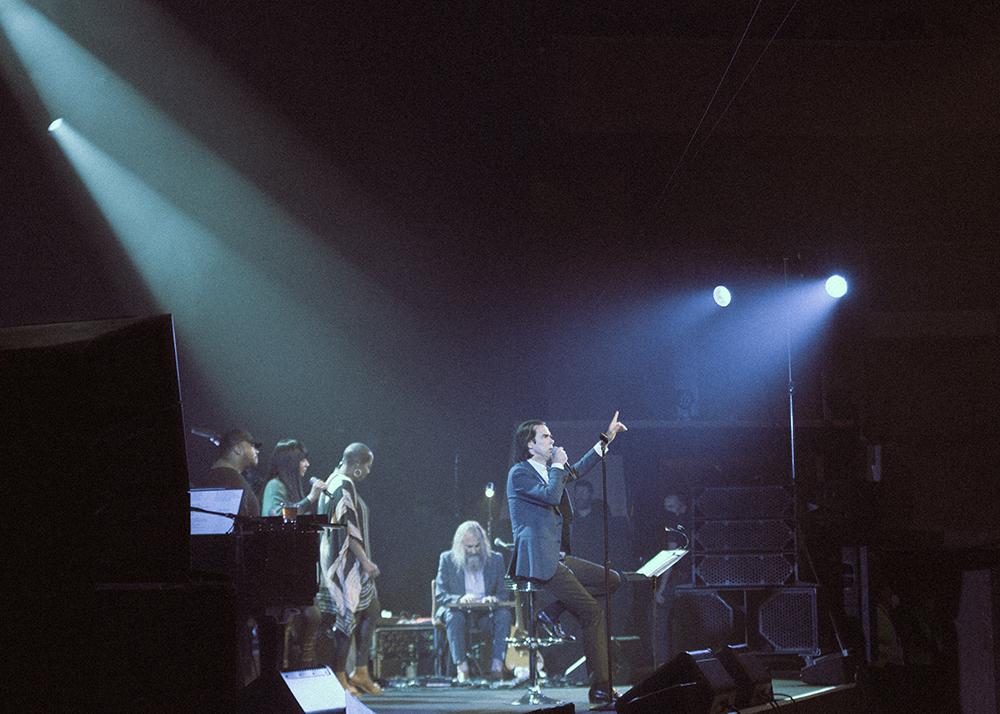 Upon stepping inside the Oxford New Theatre, the 1920s/30s styled red, black, and gold lavish interior made for the perfect decadent and rich setting for Cave and Ellis to perform within. The New Theatre has a capacity of 1,785 which made for a deliciously intimate experience with the vampiric musician and his free-spirited, long-time collaborator.

The low-lit empty band set-up teased the audience for what was to come. An empty chair for Ellis, with violin, flute and synth keyboard patiently awaiting his touch, a drum set towards the back with a bass guitar and keyboard for Johnny Hostile, and three microphone stands were set for backing singers Wendi Rose, T Jae Cole, and Janet Ramus.

The man-in-black himself had a bar stool, microphone stand and piano ready to become the tools for creating the night’s magic. It will go unbeknownst why the stool was there as Cave only chose to be off his feet for his seated piano numbers. The artist refused to do anything other than glide from one side of the stage to the other, contorting to Warren’s wailing synthesizer and snaking his slim frame in between his band members as he went. Warren Ellis’ own exuberant jerky playing style reflected Cave’s energy, exemplifying the pair’s synergy.

After the initial eruption of cheers and claps from the audience, Nick, Warren, and their band went full force into ‘Spinning Song’ from the Bad Seeds album, Ghosteen. He set the macabre, soulful tone for the evening and seeded his semantic field of imagery. Multiple tracks across the albums Ghosteen and Carnage, feature imagery around the sea, ladies’ hair, the sun and moon, the colour white, horses and Godly or religious references.

The concert felt like a look inside Cave’s head with Ellis accompanying and being a pillar of understanding and support for his visions, thoughts, and feelings. Cave and Ellis’ on-stage chemistry is palpable. Their trust and dependence on one another is something to behold. The pair would glance at each other and seemingly communicate telepathically. Their exchanged smiles and laughs were warming.

Nick, Warren, and the impressive back-up vocal trio were like sirens, drawing the audience in with their beautiful harmonies. You had no choice but to succumb and be drawn into the heavenly cacophony. The gospel-esque melting of Nick, Warren, Wendi, T Jae, and Janet’s voices made it feel like you were being taken to church – a darker, grittier kind of church.

The tour is promoting the Cave and Ellis collaboration, Carnage. I think it is fair to say that the album lives up to its name. There was something carnal about the way the pair would perform the tracks. For example, watching Cave stalk the stage, delivering the stirring track ‘Hand of God’, felt like you were witnessing a possession and an exorcism all at once. The shouts and screams of Nick, Warren and the back-up trio were raw and visceral. After the vocal and synthesizer crescendo, Cave could be seen crouching in the corner of the stage whispering the titular lyric over and over like a mantra and reaching outwards to the willing hands of the front rows.

Watching Nick perform is like watching some kind of cryptid from a folklore tale. It’s bewitching. You are not sure how to process what you are witnessing – it’s almost ethereal. All you know is that you cannot tear your ears and eyes away.

Cave would often position himself at the front of the stage and move his piercing gaze across the first few rows of the audience, within his sights.

When it came to ‘I Need You’ from the album, Skeleton Tree, Cave’s longing and emotion permeated every single syllable and note he performed at his piano. It is widely known that Skeleton Tree was written around the time of his fifteen-year-old son’s passing. Cave sang the final line, ‘just breathe’, over and over, his voice thick with desperation. His pleas were enough to give you chills.

Another stand-out performance for me was a cover of T. Rex’s ‘Cosmic Dancer.’ Cave’s interpretation saw him perform at the piano with Ellis on the violin. The repetition of ‘tomb’, ‘womb’ and ‘strange’ leant itself to Cave’s own lyrical oeuvre. I felt you could be tricked into believing the song was a Nick Cave original.

The band revisited some old fan-favourites towards the end of the show. Janet Ramus joined Nick in a special performance of ‘Henry Lee.’ The Bad Seeds frontman said it had been around a decade since it had last made an appearance on his setlist. Janet’s smoky soulful vocals brought something different to the track than PJ Harvey’s sweet, lilting voice in the original recording.

‘Into My Arms’ also featured in one of Cave and Ellis’ two encores. Never before have I attended a gig where the band have returned to the stage twice – but the crowd were hungry, and the band were only too happy to satiate them. The song came as a request from an audience member when Nick opened the floor to suggestions.

Suggestions were closed however, when an attendee shouted out the request of ‘The Ship Song’. Nick retorted playfully: “I’m not doing fucking Ship Song.” The encore performances felt freer, and it was a chance to see the band banter with the audience and with each other, readying themselves to accommodate what was asked of them - with the exception of The Ship Song of course.

On that subject, the band’s fluidity and adaptability were incredibly impressive. Warren Ellis repeatedly swapped out his synth keyboard for his violin or flute and Johnny Hostile went from keyboard to drums to bass guitar and back again, depending on what track was coming up next. I lost count of how many exceptional moments there were when Ellis and Hostile’s keyboard playing intertwined to create the all-encompassing foundations for the rest of the band, drenching the audience in the inescapable haunting ambience.

Additionally, the lighting design and use of shadow was clever. When sat at his piano, Nick would often be backlit with a spotlight, throwing his shadow onto the opposing wall. His power over the theatre and its inhabitants could be felt within this looming dark mirror image.

Contrary to this, the use of light would invoke heavenly connotations. Sometimes the back-up vocalists would be invisible until the fog was cut by the slow raising of their spotlights, bringing them into view. It gave the feel of a heavenly chorus of angels appearing out of the clouds. Warren Ellis and Johnny Hostile were given their moment with the use of lighting too. When the musicians were showcasing their impeccable solo skills, the remainder of the stage would respectfully fall into darkness.

If you have the chance to attend one of the remaining Carnage tour dates, I would wholeheartedly recommend you do so. The spellbinding brilliance of Cave and Ellis live is not something you will forget in a hurry.