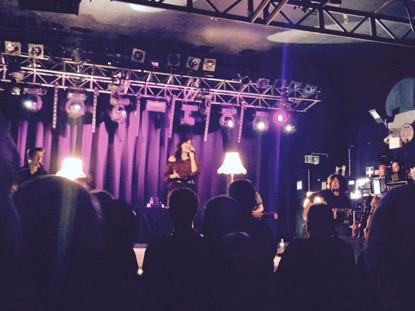 On Friday night I joined my mum at the O2 academy in Oxford to see the iconic singer-songwriter and Australian national treasure Natalie Imbruglia.

The Cowley Road venue was strikingly packed for a cold February night. The room had an ambient and intimate lounge feel. The stage was decorated with soft lamps and dimmed purple lighting; and had a generally laid back vibe. Rum and coke in hand I found myself being taken in by the 90s vibe, a part of me just wanted to hear ‘Torn’ on repeat.

Most people are familiar with Natalie Imbruglia’s 1997 cover of Ednaswap’s ‘Torn’ which made her into the 90s icon she is. ‘Torn’ sold over one million copies in the UK alone and was no.1 in the UK Radio Chart for 14 weeks and as of 2011 it was the most played song on Australian radio since 1990. Last year marked 20 years last year since her first album Left of the Middle was released, that gained her 90s notoriety. She told the audience that since the anniversary she has had a stylistic change to her live performances, opting for an acoustic band which gives her music a paired back and organic tone, moving away from the pop sound. Imbruglia’s performance was a treat for her dedicated fans. She didn’t interact very much with the audience but she did reveal she hadn’t performed some of the songs since 1998 which gave the gig an exclusivity. Her performance was intimate, emotional and raw - exactly what her fans want to experience. There were a couple of times where she faced away from the audience to wipe tears away from her eyes, one was during the performance of ‘Smoke’ from her first album - something I‘ve only seen from a few artists, and one time to drink some vodka, she jokingly added. The fans seemed to understand how real her music is to her and weren’t alarmed by her tearful moments. I spoke to a man in the audience who told me his husband was her biggest fan and how much her music meant to him - a sentiment that you could feel in the room. The highlight was her performance of ‘Torn’ and another one of her classics ‘Wrong Impression’. Her live rendition was different to the released version because of the edgier acoustics from her band. Although, the band provided some great music they could have played longer instrumentals and generally had more limelight. There were one or two songs where they really ramped up the sound, particularly ‘Butterflies’ with its melodic guitar rifts, which created an energetic atmosphere, but this was sadly short lived. Imbruglia closed the gig with ‘Wrong Impression’ and then said bye and suddenly left. People around me were speculating that maybe the song had made her emotional, but she seemed slightly uncomfortable. After the crowd cheered for an encore there was some suspense before a gentle acoustic guitar started playing and she came back for one more song which made the audience erupt. Imbruglia’s tour is certainly off to a promising start and her fans are able to experience her singing in a frank, bare and heartfelt way.

An award-winning love story at the Corn Exchange, Newbury