Review: Dolly Parton’s hit feminist musical, 9 to 5 at Oxford’s New Theatre well worth ‘tumbling out of bed’ for 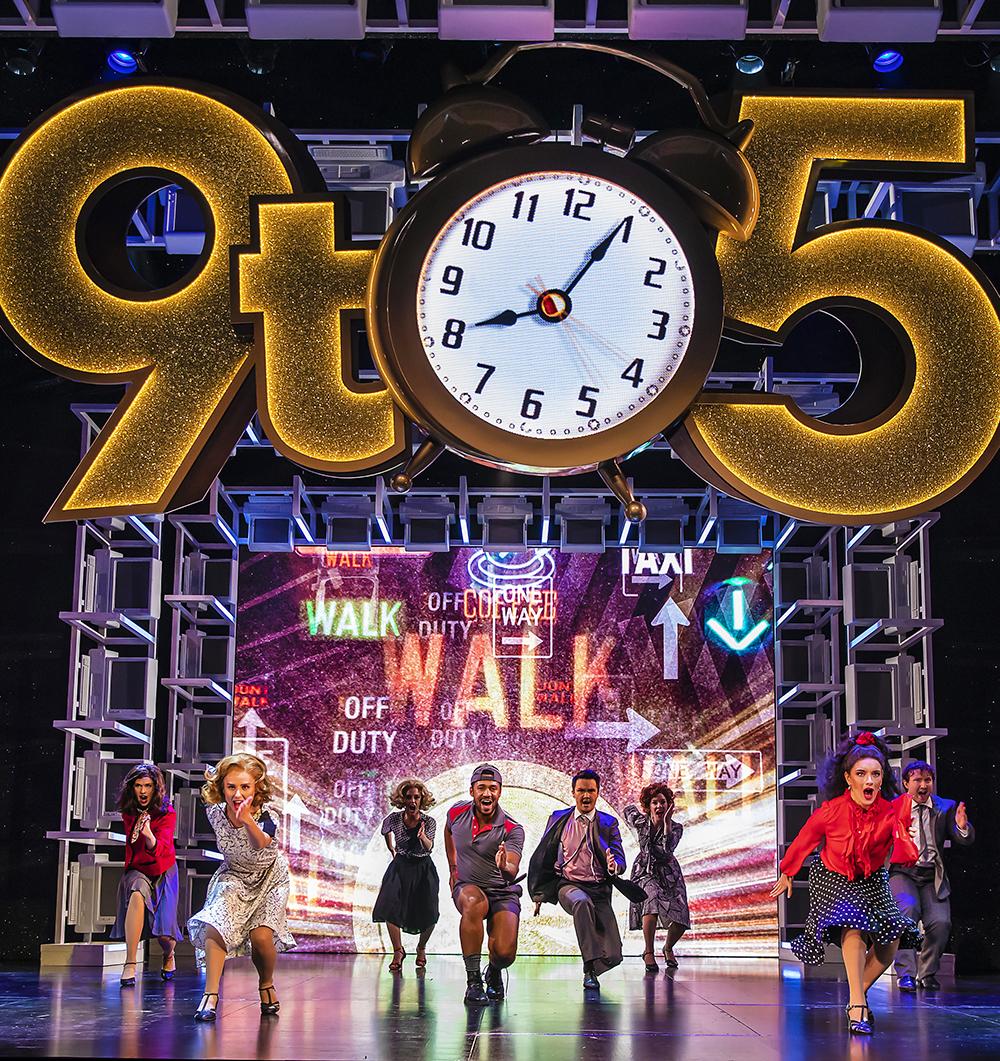 The Ocelot’s Jessica Durston was invited to attend a performance of 9 to 5 at Oxford’s New Theatre.

Do you love Dolly Parton? A strong female-led cast? A power suit? Tales of villains getting their just deserts?

If you answered yes to one or more of the above questions, then boy, is 9 to 5 the musical for you! And if you have reservations as you hold the 1980 classic feature close to your heart, fear not. This stage production neither replicates nor tries to compete with it.

If you have not had the pleasure of seeing the film beforehand, 9 to 5 follows three office workmates who are pushed to their limits by their sexist, egotistical, horror-show of a boss. The trio hatch an elaborate plan to kidnap their nightmare supervisor and start making the changes they want to see both within their workplace and within their personal lives.

Actress, singer, and TV presenter Claire Sweeney joins the cast as the plucky and outspoken Violet Newstead. Her performance was impressive, and she embodied her character well. Working in perfect harmony with her fellow co-stars, Sweeney was clean, professional, and thoroughly enjoyable to watch. She definitely belongs on the stage.

Stephanie Chandos took the role of Doralee Rhodes, who Dolly Parton herself first made iconic. Chandos does not cheapen the role by playing Doralee like a Dolly carbon-copy. She does the well-loved character justice, right down to perfecting the Tennessee accent. She provides the audience with what they would expect from their Doralee, sunshine, sass, and sensational vocals.

Vivian Panka gives a fantastic performance as the shy, wallflower Judy Bernley, who undergoes the biggest confidence and lifestyle overhaul out of the three female leads. Panka as Judy helps to take you right along with her on the journey of her own self-discovery. On the evening of my attendance, her powerful vocals left audience members in awe. Her solo rendition of ‘Get Out and Stay Out’ garnered many whoops, hollers, and cheers from all the ladies present in the New Theatre, as it is an empowering and emancipatory moment for Judy and all those that fall in love with her character.

The three leading ladies performed beautifully alongside one another, bringing the sisterhood penned in Patricia Resnick’s original screenplay to life, and the numbers where Sweeney, Chandos and Panka harmonise together will give you goosebumps.

Moreover, the sparkling spirit of Dolly Parton is evident within the musical (even without her little digital screen cameos). The inspiring lyrics of the show’s soundtrack are all about not being afraid to show the world your true self and knowing your own self-worth. For example, it is impossible to listen to Doralee’s solo performance of ‘Backwoods Barbie’ without thinking about Dolly and the adversity, judgement and stereotyping she has faced within her life, due to her appearance and her sweet nature.

Dolly’s digital screen cameos that appeared within the clockface set piece gave her the role of the omniscient narrator, keeping an eye on the characters and helping to move the story along in between acts.

The musical is light-hearted and laugh-a-minute even though it tackles dark subject matter. It challenges audience members to reflect upon the differences between men and women, and then subvert any traditional stereotypes or preconceived notions. The office boss, Franklin Hart Jnr (played by the incredible Sean Needham) is almost caricatural at times, with his archaic and laughable misogynistic tendencies. Although Hart is such a cad, Needham’s hilarious performance ensures you still enjoy him as a character – even if you are laughing at him rather than with him.

In addition, Hart Jnr’s right-hand woman, Roz Keith (played by the fabulous Julia J Nagle), helps to explore the subversion of traditional gender stereotypes. Just as Hart Jnr lusts after Doralee, Roz lusts after him. Both characters even perform mirroring individual numbers professing their secret desires – and they’re both hilarious and excellent.

Hart Jnr makes you reflect on your own working life and will almost certainly conjure up images of previous bosses you yourself have had grievances with. I mean what could be more cathartic than joining Violet, Doralee, and Judy in fantasising about all the creative and wacky ways you would seek revenge on that asshole. I mean, we can all think of one, right? (Here, I feel it is important for me to mention that I am not talking about my current boss, who will definitely read this review at some point.)

Using a light-hearted approach when dealing with sexism works well for 9 to 5. Rather than preaching or using a pointed or angry, lens, the musical gently brings ideas of inequality to the forefront. Jokes are made about how the gender pay gap is sure to be a thing of the past in around ten years’ time (remember this was set in the 80s? Yeah, I’m shaking my head too). These jokes received laughs and simultaneous groans from the ladies in the audience, and hammer home why this story is so important. It reminds us how far we have come in relation to equality and women’s’ rights, and how far we still must go.

And 9 to 5 is not just about feminism, it promotes ideas of equality and fairness within the workplace too. It explores how the workplace environment, and the upkeep of morale are important factors in worker efficiency and productivity. The show tells its audience members that it is okay to speak out if something is not right and encourages them to follow their dreams and ambitions.

But let me get down off of my soapbox and return to discussing the more tangible aspects of the performance. The effective set design allowed for slick positioning and a strong sense of setting. The cast members were easily able to weave in and out and sometimes desks and other furniture were even incorporated into the dance numbers. The changes from office scenes to interior home scenes were seamless and allowed audience members to remain engrossed in the performance plot.

Rows of computers framed the stage like a border and were positioned as if replicating the look of an infinity mirror. I thought this was inspired. As well as providing lighting for the stage, the computers helped to further create a sense of place and set the office backdrop alongside the desks and chairs. The prominence of the endless screens, keyboards and the emitting bright white light also helped to put you in the shoes of the cast, leaving you feeling like you were also unable to escape the dreaded office 9 to 5 shift under the rule of Hart Jnr.

In addition, the ensemble cast members were just brilliant, contending with the constant switching around of the set pieces and costumes, all whilst singing and dancing! Costume Supervisor, Jennie Falconer also did a fabulous job with the performers’ wardrobe. She executed the very essence of Doralee/Dolly with Stephanie’s various neat and feminine outfits. Falconer’s design talents also extended to rest of the ensemble cast with their chic 1980s suit combinations. The casts’ wardrobe was an extra step in creating the desired immersion, giving viewers that all-important flashback to the 80s.

The show really does have something for everyone. It’s wacky, uplifting, relatable and impossible to resist. It goes without saying that I would recommend you go and see it - if not for me, then do it for Dolly!