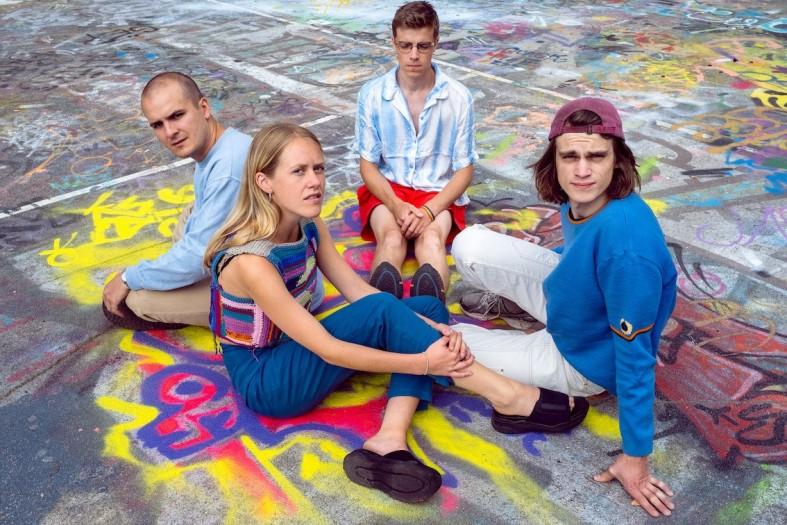 “If you have a vacancy for favourite new band, Pom Poko would like to apply for the role,” tweeted Tim Burgess in April, as Norway’s finest punk-pop anti-conformists revisited their joyous debut album, “Birthday”, for one of Tim’s mood-lifting Twitter listening parties.

Pom Poko pimp their CV on all fronts with their glorious second album. Between the quartet’s sweet melodies, galvanic punky ructions and wild-at-art-rock eruptions, Cheater is the sound of a band celebrating the binding extremes that make them so uniquely qualified to thrill.

As singer Ragnhild Fangel explains of the leap from “Birthday” to “Cheater”:

“I think it’s very accurate to say that we wanted to embrace our extremes a bit more. In the production process I think we aimed more for some sort of contrast between the meticulously written and arranged songs and a more chaotic execution and recording, but also let ourselves explore the less frantic parts of the Pom Poko universe. I think both in the more extreme and painful way, and in the sweet and lovely way, this album is kind of amplified.”

Both sonically and thematically, that sense of amplification asserts itself right off the bat with the tearaway title-track. Bursting into life on the back of a blast of fractious guitar noise, a thrashing riff and a sweetly sardonic vocal, “Cheater” laces its serotonin rush with tangy lyrics about dreams and, says Ragnhild, the kind of “cheating kid who doesn’t understand why they didn’t get things exactly like they wanted on their first try”: thematic motifs that reverberate throughout the album.

From here, Pom Poko court their extremes with firecracker confidence. Its lilting melody laced with a critique of gender stereotypes and set to a Breeders-style lurch, “Like A Lady” is sharp and catchy. First single “Andrew” upholds a facility for simplicity in one of Pom Poko’s loveliest choruses.

Further evidence arrives in the contrast between the thrilling, think-on-its-feet thrash-pop of “My Candidacy” – made in less than three hours – and the mellifluous “Danger Baby”, a tale of irrational fears with Ragnhild’s vocal and Martin’s guitar merged in unexpected union. That love for surprise synchronicities, slanted sounds and unexpected subject matter propels “Andy Go to School”, where a tempo-tweaked guitar line accompanies a lyric extolling the pleasures of water parks and a free-flowing sonic palette.

“Towards the end, one of the guitar pedals made a huge BZZZ sound in a pause, but we thought it was cool and raw so we just rolled with it,” says Ragnhild. “We like to mix the feeling of a surgically produced piece of music with the random sounds that also happen when you are a band playing together.”

After its opening, almost Bolan-esque belches of guitar, “Look” extends that spirit of openness to an invitation to look outside of one’s self, before “Body Level” ends the album on a characteristically generous, unguarded – amplified – note of positivity. “Things get better,” sings Fangel, embracing directness with the same readiness as Pom Poko exult in giddy intricacy.

You can click HERE to listen to “My candidacy” and HERE to pre-order Cheater.

FIRST LOOK AT PRIVATE PEACEFUL AT THE BARN THEATRE