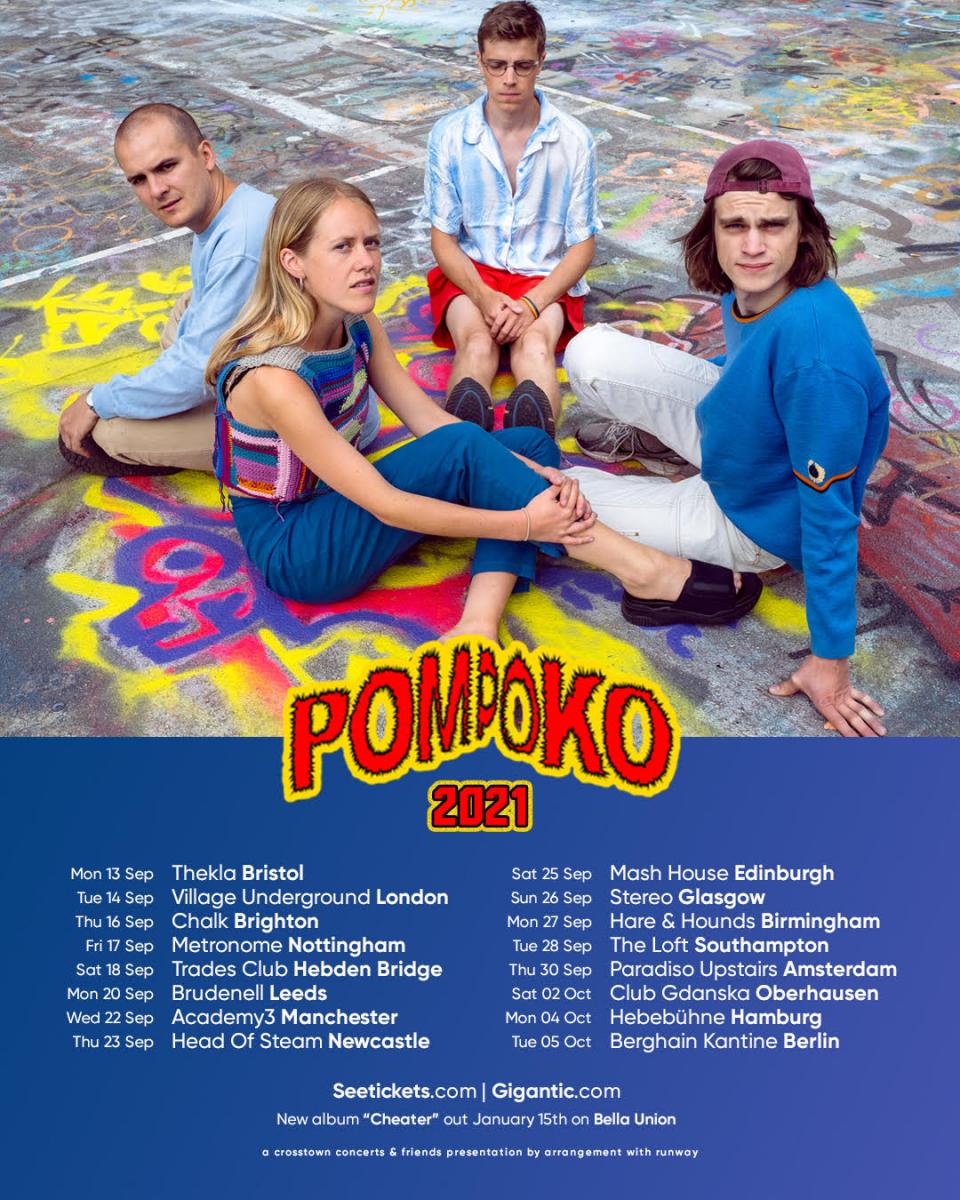 With their new album Cheater due for release 15th January via Bella Union, which includes the tracks ‘Andrew’, ‘My Candidacy’ and ‘Like A Lady’, Pom Poko have announced news of an extensive UK and European tour for September and October 2021. The tour includes their biggest London headline show to date with a performance at Village Underground. Dates/info below:

“If you have a vacancy for Favourite New Band, Pom Poko would like to apply for the role,” tweeted Tim Burgess in April last year, as Norway’s finest punk-pop anti-conformists revisited their joyous debut album, Birthday, for one of Tim’s mood-lifting Twitter listening parties. Pom Poko pimp their CV on all fronts with their glorious second album, Cheater, out early 2021. Between the quartet’s sweet melodies, galvanic punky ructions and wild-at-art-rock eruptions, Cheater is the sound of a band celebrating the binding extremes that make them so uniquely qualified to thrill: and, like Tim’s listening party, to fulfil any need you might have for a pick-you-up.

As singer Ragnhild Fangel explains of the leap from Birthday to Cheater, “I think it’s very accurate to say that we wanted to embrace our extremes a bit more. In the production process I think we aimed more for some sort of contrast between the meticulously written and arranged songs and a more chaotic execution and recording, but also let ourselves explore the less frantic parts of the Pom Poko universe. I think both in the more extreme and painful way, and in the sweet and lovely way, this album is kind of amplified.”

Both sonically and thematically, that sense of amplification asserts itself right off the bat with the tearaway title-track. Bursting into life on the back of a blast of fractious guitar noise, a thrashing riff and a sweetly sardonic vocal, “Cheater” laces its serotonin rush with tangy lyrics about dreams and, says Ragnhild, the kind of “cheating kid who doesn’t understand why they didn’t get things exactly like they wanted on their first try”: thematic motifs that reverberate throughout the album.

From here, Pom Poko court their extremes with firecracker confidence. Its lilting melody laced with a critique of gender stereotypes and set to a Breeders-style lurch, “Like A Lady” is sharp and catchy. First single “Andrew” upholds a facility for simplicity in one of Pom Poko’s loveliest choruses, though a band such as this will never settle for the obvious: Martin Miguel Tonne’s jazzy guitars seem to do everything except what you expect them to.

Further evidence arrives in the contrast between the thrilling, think-on-its-feet thrash-pop of “My Candidacy” – made in less than three hours – and the mellifluous “Danger Baby”, a tale of irrational fears with Ragnhild’s vocal and Martin’s guitar merged in unexpected union. That love for surprise synchronicities, slanted sounds and unexpected subject matter propels “Andy Go to School”, where a tempo-tweaked guitar line accompanies a lyric extolling the pleasures of water parks and a free-flowing sonic palette. “Towards the end one of the guitar pedals made a huge BZZZ sound in a pause, but we thought it was cool and raw so we just rolled with it,” says Ragnhild. “We like to mix the feeling of a surgically produced piece of music with the random sounds that also happen when you are a band playing together.”

After its opening, almost Bolan-esque belches of guitar, “Look” extends that spirit of openness to an invitation to look outside of one’s self, before “Body Level” ends the album on a characteristically generous, unguarded – amplified – note of positivity. “Things get better,” sings Fangel, embracing directness with the same readiness as Pom Poko exult in giddy intricacy.

The sound of four distinct personalities driving in divergent directions towards one destination, the result is an evolved snapshot of the bracingly contrary chemistry forged when Fangel, Tonne, Jonas Krøvel (bass) and Ola Djupvik (drums) united to play punk during a jazz gig at a literature festival in Trondheim (the band-members studied jazz there.)Taking their name and spirit from Japanese animation visionaries Studio Ghibli’s marvellously out-there film about raccoon-dog rebels with unfeasibly large testicles, Pom Poko showcased that convulsive individuality to exuberant effect on 2019’s Birthday. Along the way, they drew praise from NME, DIY, PopMatters, The Line Of Best Fit, The Independent and BBC Radio 6 Music, while going on to be nominated for two Norwegian Grammy Awards (Spellemannprisen) and The Nordic Music Prize. Meanwhile, a huge touring schedule included countless sold-out headline shows and a rapturously received UK jaunt with Ezra Furman.

Written in the same run that produced interim releases “Leg Day” (with its playful dance-based video) and “Praise”, and recorded/produced in cooperation with Marcus Forsgren (Jaga Jazzist, Broen, Arc Iris), Cheater does its predecessor proud on every front. Bursting with colour and wonky life from its cover art (by close collaborator Erlend Peder Kvam) outwards, it differs from Birthday primarily in that its songs did not have a chance to be road-tested before going into the studio. But you wouldn’t know it. As Ragnhild explains, “That meant we had to practice the songs in a more serious way, but it also meant the songs had more potential to change when we recorded them since we didn’t have such a clear image of what each song should/could be as the last time.”

In other words, consider that vacancy for free-thinking punk-pop adventurism in your life filled. Right, Tim?