New album from LANY, Mama’s Boy out next week on 2 October 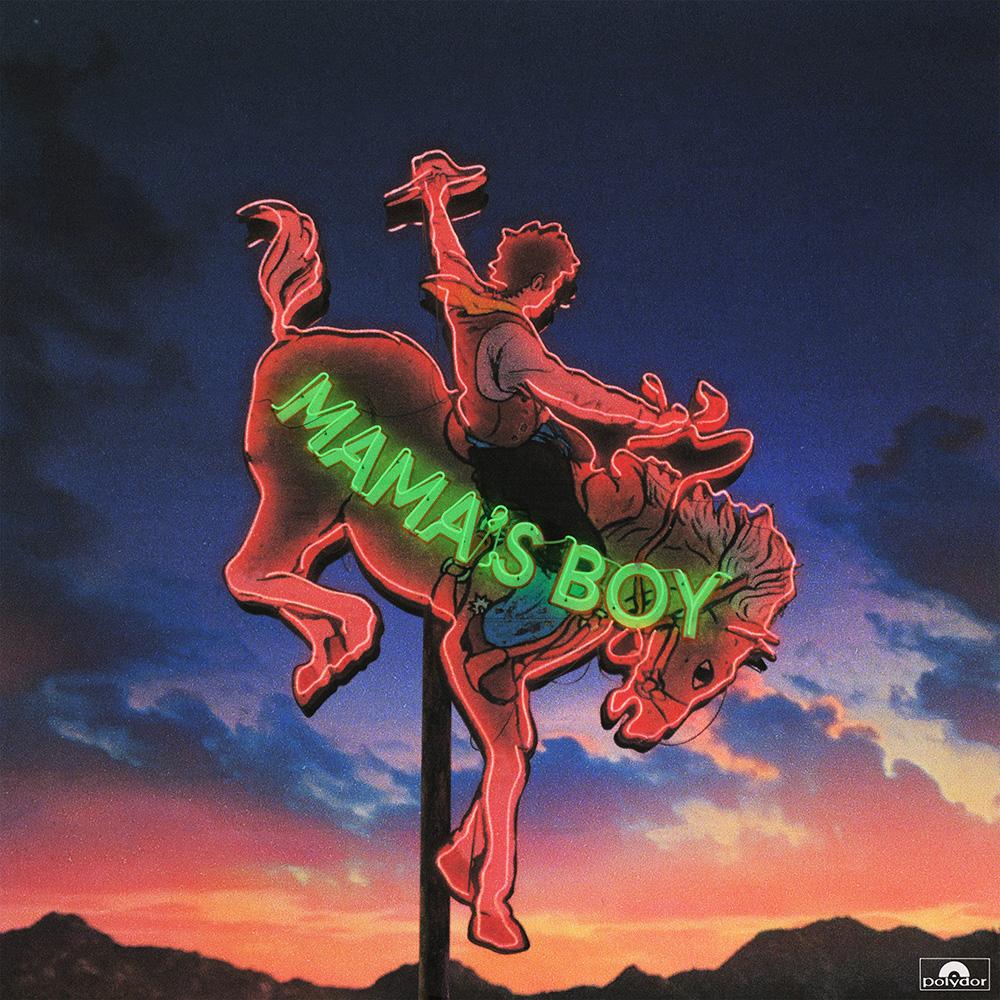 LANY’s breakthrough came with their 2017 self-titled debut, amassing an international fanbase and selling out multiple nights at arenas across the world.

Their 2018 follow-up Malibu Nights sealed the deal. Its heartbreak anthems cracked the Billboard Album Chart and connected in a huge way across the globe.

The statistics speak for themselves: LANY have a social media following of 5.8 million people, have sold over 415,000 tickets worldwide and played sold-out shows from L.A.’s Greek Theatre to London’s Brixton Academy, with arena shows in major cities planned for this album.

Their songs have been streamed over three billion times and they’ve had over 430 million video views to date.

It was late summer of last year. Paul Klein, frontman of American alt-pop band LANY, stood on stage in front of a thousands-strong audience, overwhelmed. In that moment he thought about home: his family, his parents, his ageing Uncle Buddy, who’d been like a grandfather to him his whole life.

There were 7,000 miles between Paul and his home state of Oklahoma, where those family members lived. Next time I see Uncle Buddy might be the last time, he thought. He didn’t realise it at the time but that moment on stage proved to be the catalyst for LANY’s greatest, most reflective album to date: an intense and expressive reappraisal of values and priorities that finds Paul’s lyrics exploring modern life through the prism of his own upbringing.

When any band reaches a new point of greatness in their career, they reflect upon the journey so far and LANY’s started in 2014 when Paul, alongside bandmates Jake Goss and Les Priest, escaped their humble upbringings for Nashville and eventually LA, creating a band from the remnants of their own musical projects. Together they crafted lyrically meticulous alt-pop tracks with big, pristine soundscapes behind them; songs about love, heartbreak and living that felt world-spanning, despite the band’s modest home setup.

After signing to Polydor in 2015, the trio’s self-titled debut album arrived two years later, and an international fanbase that’d been quietly growing suddenly burst to the fore. If they started out as an ‘internet band’ that label couldn’t stick for long: soon they were selling out multiple nights at arenas across Asia, with huge shows and festival dates in the rest of the world not far behind.

In 2018 the band’s second album Malibu Nights, written by a heartbroken Paul in just two months, spawned singles “Thru These Tears” and “I Don’t Wanna Love You Anymore” and saw LANY cracking the Billboard Album Chart, setting in motion a wave of success that sees the band currently standing at over 9.4 million monthly listeners on Spotify alone and over 3.5 billion streams on the one service. Malibu Nights, brooding, vast and searingly honest, felt like a step forward for the band: “After that evolution,” Paul says, “you ask yourself: How do I do that again?”

The process, this time, had to be different. While the majority of the band’s first two records were written in LA, shimmering and bright, the third had to harken back to a time that felt purer, more in touch with the world LANY came from. Days after the Malibu Nights tour ended, with his on-stage epiphany still clear in his mind, Paul packed his bags and headed for a house-slash-studio in Nashville or, rather, out in the sticks somewhere near
Nashville. He slept in that house for two weeks, with Jake and Les joining him for some of that time,” and picked a few songwriters that I admired who were willing to come and write with me.”

The plan was to create a new record imbued with a sense of family and belonging that Paul had felt himself missing in recent years. “There was this moment in time when I became confident in the success the band had, and we were in the middle of realising our dreams,” Paul says. The guise of cool he’d adopted to fit in in LA, a persona that made living there easier, had with time started to shift, and it was time to remind himself of who he really was.

With that shift came a heightened awareness of heritage, memory, and the infallible nature of family, and all that shaped album three. It’s called mama’s boy.

“I felt like I needed to go to Nashville to work with those writers,” Paul says of his decision to start mama’s boy somewhere other than yet another LA music studio, with guitars, for the first time, leading the way. “There’s just a certain type of song that they make there.”

In the house in Nashville, Paul would wake at noon, make a coffee and write. It was in that studio that mama’s boy’s first single “good guys” came to life. The distance from his new home helped Paul write about what he calls, “the quintessential experience in LA”.

It’s a thoughtful, wistful song about what it feels like to offer the world to someone who, despite your best efforts, isn’t interested. ‘“I love spending time with you’: as soon as you say that, they figure something out and they’re not interested anymore,” Paul says of its meaning. “It’s like a challenge. You accomplish the task of getting someone to like you, and they move on.”

Being on the outskirts of Nashville, cut off from the temptations of the big city and feeling closer to his family, Paul allowed himself to delve into a part of himself most might fear to tread, like in “i still talk to jesus”. Since he’s left home he has, at his own admission, lived a little. He’s grown up. Backed by stadium-ready guitar lines and gospel choirs, he pours himself into the words he sings on it: “Hallelujah, Amazing Grace / Just tryna do better than yesterday.”

Within that Nashville fortnight, LANY worked on five of the album’s 14 tracks. Back in Los Angeles, enriched by the spirit of that place, work continued. The stadium anthem “you!”, to Paul, felt the biggest. It’s a widescreen ode to love; intimate and yet embraceable by everyone: “You’re the sun to the moon,” he sings. “You’re my ocean painted blue / You, I’m nothing without you.” It sounds so grandiose, you wouldn’t have thought Paul wrote it “exhausted and hungover”, eager to create something worthy of being blasted through the speakers of a massive stage. He unabashedly cites his love for Chris Martin and Coldplay in its creation: “It was us channeling, to the best of our ability, my favourite frontman and band.”

The finished album is a sweeping tribute to home, heritage and family, the tracklist reading like a vast diaristic take on what it means to walk the Oklahoma landscape in the shoes of an artist who’s seen the world. It’s both wise and knowingly naïve. “heart won’t let me”, paints a portrait of someone bruised but struggling to walk away from the source of their pain, backed by gentle, ruminative chords that glimmer with hope. “Cowboy in LA” sees Paul rewind to those first steps in LA, a time when he held the door for shoppers at Celine on Rodeo Drive. Funny then, that Celine’s Artistic Director Hedi Slimane was one of the first public figures to fully embrace the band. Today, the French fashion house Saint Laurent count Paul as one of their few exclusive faces, and fly him to Paris for their seasonal shows.

That world too, to an extent, has helped inform the album: “I wanted to walk the fine line of pop, cowboy and Americana,” Paul says. “Taking the American sides of brands like Ralph Lauren, and mixing with the European, rock n roll chic of Saint Laurent.”

The last track on the record, “nobody else”, is a bittersweet send off; a modest love song about the lengths we go to show our loyalty to someone. It was written one afternoon with Dan Wilson, Grammy-nominated co-writer of Adele’s “Someone Like You”. “I walked into his house and we didn’t touch a computer, he sat there, legs crossed, with a tiny acoustic ukulele hybrid guitar,” Paul says of the song.

The arrival of mama’s boy spells the beginning of a new chapter in the life of LANY. One that’s always been inside of them, keen to be set free. How they got there, though, rested on looking back to the past. “There was only one person in the world I cared about hearing Malibu Nights,” Paul Jason Klein says. “I want everyone in the world to hear mama’s boy.” The band have poured of everything they have into 14 tracks about where they’re from, what they’re about, and what’s really important in life. It glows like a sunset.