Netflix series is a treat for the senses 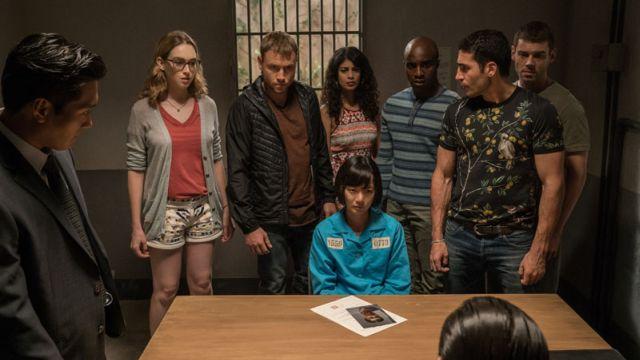 As a film and series enthusiast, I’m always looking for new shows and movies to watch and engage with. A show that I became instantly hooked on was the Netflix original series, Sense 8. I immediately fell in love with the cast and their relationships with each other and others. As Swindon Pride is coming up, i thought the show itself is quite relevant as it touches on equality and strongly represents the LGBT community.

Sense 8 is about 8 strangers whom are all parts of different cultures, all from different countries. After a tragic death, they discover that they are all somehow emotionally and physically linked. Whilst trying to figure out what this connection means, they must find a way to survive being hunted by those who see them as a threat to the world’s order. Each episode reflects the views of the characters while delving deeper into their backgrounds and what sets them apart and brings them together with the others. Despite IMDB 8.4/10 review, the Netflix original got barely any recognition and next to no promotion, in comparison to recent shows shows such as ’13 reasons why’ or ‘Riverdale’. Sense 8 could possibly be one of Netflix’s most LGBT friendly series, yet no one seems to have heard about it. Sense 8 approaches several different sexualities- the main characters being not only heterosexual, but also gay, lesbian, bisexual and transgender. It also handles other serious subjects such as racial differences, feminism and deficiency of capitalism. Although the series isn’t based upon recognition for LGBT, it highlights throughout the series some of the characters inner conflict with who they are. For example, the series constantly refers to lead character transgender Nomi’s, played by Jamie Clayton, families trauma to accepting who she is rather than who she was. Cindy Holland, VP of Netflix original content, said “It is everything we and the fans dreamed it would be: bold, emotional, stunning, kick ass, and outright unforgettable. Never has there been a more truly global show with an equally diverse and international cast and crew, which is only mirrored by the connected community of deeply passionate fans all around the world.” When I discovered the show, it wasn’t because of its cultural diversity, but because of its intense, psychological story line. Wachovskis and Staczynski managed to capture the human element that the Matrix lacked throughout the Sci-fi drama series. I was completely and utterly hooked, so as soon as I found out a season 2 was on its way, a countdown began immediately! Recently, Netflix had decided to cancel the show and not to re-new a third season, along side with ‘The Get Down’. I was of course gutted, alongside with other infuriated fans, particularly because leading shows such as ’13 reasons why’ are to be renewed for another season, despite the book it was based upon not having a further lead. Obviously outraged, fans were demanding answers.  Chief Content Officer Ted Sarandos later stated that continue the show(s) were too expensive- “When I say that, a big expensive show for a huge audience is great. A big, expensive show for a tiny audience is hard even in our model to make that work very long.” As fans were still not impressed by this response, a petition grew and due to popular demand, the producers eventually agreed to an annual Sense 8 christmas special. Sense 8 can be found on Netflix. Swindon Pride will be held in Old Town on July 29.

Jess and Olly to rock racecourse