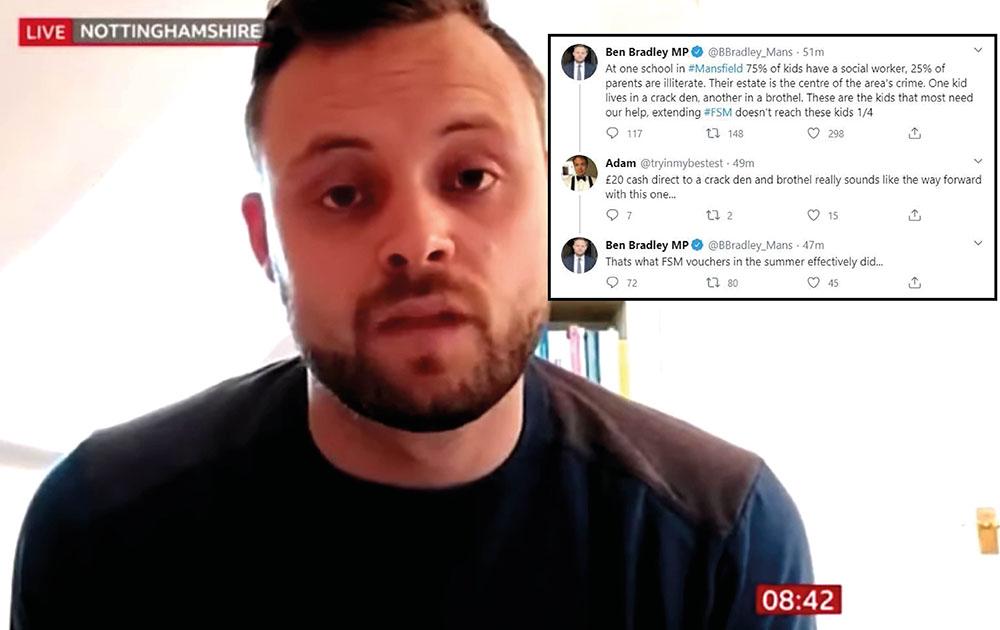 MP Ben Bradley helped clear up a rather messy situation today over what were perceived to be downright shitty remarks he made on Twitter where the Mansfield MP claimed poor people in Britain are basically crack-smoking brothel frequenters - by explaining that his views, specifically the ones where he agreed with the context of the thread saying that all poor people were basically spunking all their money on drugs and prostitutes and that’s why they can’t afford to feed their kids - were actually taken out of context.

In an effort to avoid any further mix-ups Mr Bradley then considerately deleted the entire context – in this case, a Twitter thread - in case anyone went looking for the original context that his remarks were definitely taken out of.

Unfortunately for Mr Bradley, the pinko-liberal-Gary-Lineker-run media with its pinko-liberal-Gary-Lineker-loving agenda just wouldn’t let it lie, and he was duly brought in to explain his shitty remarks, and outline exactly how they were taken out of context to the journalistic heavyweights of BBC Breakfast, like that bloke with the bouffant hair, and her that does the weather.

Mr Bradley duly mansplained to an inexplicably confused Naga Munchetty that his remarks - where he quite literally agreed with someone on Twitter suggesting the last Free School Meal vouchers issued in the summer that were supposed to be spent on kids’ food were actually spent by working class mums and dads in that typical hangout of young parents - crack dens and knocking shops - were completely taken out of context.

The interviewer, who was now just being awkward to poor Mr Bradley, then painstakingly read out his entire Twitter thread back to him, including his remarks, and those that he then responded to, and all the other parameters that would usually define ‘context’,  at which point Mr Bradley carefully and diplomatically stated that he didn’t want to get into the ‘who said what to who’ and ‘who labelled who a bunch of irresponsible drugged-up sex perverts’ right now.

However, Ms Munchetty kept on pressing him to explain what he meant by ‘out of context’ until things got so bad that Dom Cummings himself - who was viewing proceedings from his underground comms centre close to the centre of the Earth - literally pulled the plug, and Ben Bradley’s face was suddenly frozen, mid-squirm and probably out of context, in front of the entire nation.