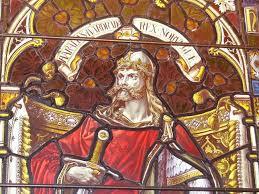 The most high res picture available for Harald Hardrada as cameras were not as good back then.

The British monarchy was thrown into chaos last night as it emerged that Harald Hardrada, a one-time claimant to the English throne who was thought to have died over 900 years ago, was actually alive and well and living in a semi in Bromley.

The revelations came to light when a man formerly known as Peter Gibbons until last Thursday tea time, announced to the press he has chosen to identify as the long dead Norwegian king, and that no one can stop him as he’s allowed to identify as whoever he likes now.

The stunning news came as a shock to the house of Windsor-Hitler-Montbatten, as their entire claim to the throne over previous centuries could be undermined by the re-emergence of Mr Hardrada,.

Historical boffin Magnus Studious explained to a riotous crowd gathered outside the library; “Harald was one of three major claimants to the English throne at the time, and, when he realised he wasn’t going to get what he wanted, he followed this up with a good old fashioned Viking invasion of England in that tumultuous year 1066.

And it was all going swimmingly, until he was slain by fellow-throne-claimant, and indeed fellow Harold, Harold Godwinson. And being dead, of course, ruled Hardrada out of the running by default.

“The victorious Harold Godwinson, then famously followed that victory by marching his army back down the hill, and indeed all the way back down the country, only to get his arse handed to him in Hastings by the third and final claimant to the throne, William of Normandy.

“And thus, with ‘Conqueror’s first victory, we began the first major ‘Willenium’. Basically, because of that victory, every royal you’ve ever heard of since, from Henry the VIII to Colin Firth to Diana to the Lizzes (both the Blackadder one and the current one) have descended from, or married into, a descendent from this bloke.

“And the only reason no one has batted an eyelid since – well, apart from all the bloodshed in the civil war, and the reformation, and all those other bits - was because William was crowned King of England fairly and squarely, due to all the other claimants being dead. It made for a pretty strong case at the time.

“But, if it turns out one of the other claimants, for example Harald Hardrada, is actually still alive, well, I suppose the battle’s still on, isn’t it? And if Harald wins, well, ‘er Maj will have to vacate the Palace sharpish, and we’ll get some Norweigans in.”

BT sports have snapped up the rights to the live battle coverage, pipping Sky Sports to the mouthwatering pay-per-view event which is sure to rake in millions.

For terrestrial viewers, Gary Lineker will host highlights of the battle that has been dubbed “the Battle of Hastings, Part Deux” later on, and there’ll be expert post- analysis from Sir Simon Schama, he of the seminal ‘A History of Britain’ show; celebrated historian Dame Mary Beard, a professor of classics at Cambridge University and famed for her scholarly analysis; and Alan Shearer, who once scored some goals for England.

“It’ll be one hell of a match-up,” opined Gary Lineker on Twitter, “Both sides look evenly matched. Sure, the man identifying as Hardrada is much younger than the Queen, but you don’t get to her age without knowing a dirty trick or too.

“And of course she has the entire British Armed Forces also on her side, which probably improves her odds slightly. Hardrada has so far only named his brother Steve on his team sheet, but perhaps we’re in for some surprise last minute call ups. Peter Crouch is currently a free agent, and might fancy this. I can’t wait!”

But not everyone is pleased, as Roddy Raccoon, of the LGBTQI+ alliance in Hastings, said: “There are real people struggling with sensitive issues of gender identity and all too often suffering traumatic upheaval and discrimination because of it. It’s a very serious issue and this bloke, quite frankly, claiming to ‘identify’ as a long-dead king is just taking the piss. If he’s Hardrada, then I’m Hardrada’s foot!”