Maddy Prior is back in Oxford in enchanting form 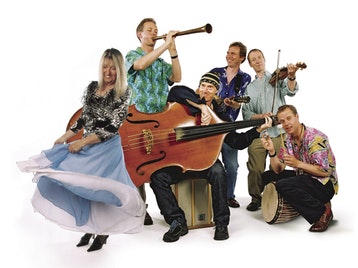 Queen of folk singer Maddy Prior joins up once again with the Carnival Band during the Festive Season, for their unique celebratory show “Carols & Capers”.

Together they mix renaissance, modern and ethnic instruments with a refreshing cavalier attitude and plenty of humour putting their inimitable stamps on a range of familiar and not-so-familiar festive fare.

Tossed together in 1984 on a ‘let’s see what we come up with’ basis for a Yuletide Radio 2 broadcast, what began as a one-off session in a village hall in Cumbria has endured for over twenty years and has become something of a tradition in its own right.

Fortunately it shows little danger of fossilization as both parties keep coming up with new ideas. The 2001 collaboration and fifth album, of “Gold, Frankincense and Myrrh” introduced a good deal of Arabic and African-influenced music into the equation. The next project explored the lives of eighteenth century female soldiers and the ballads they inspired.

Of all the festive traditions, few have stood the test of time better than the Christmas carol. Maddy Prior and the Carnival Band know this more than most, having been inspired by the music of Christmas for the past twenty-five years. Now and for the first time, the very best of these have been brought together on one album. “The Best Of Maddy Prior and The Carnival Band” collects twenty two tracks from across their career. Along the way you will find a mixture of the familiar and the less well known, all presented in a most unique style.

With an extensive experience in folk, medieval, world and classical music between them, the singer and players guide us to exquisite places. Telling the Christmas story in a variety of ways, the likes of ‘I Saw Three Ships’, ‘While Shepherds Watched’, ‘God Rest Ye Merry Gentlemen’ and ‘The Holly Ivy’ are revealed as versatile, striking pieces of music with words to match.

Carols & Capers will be playing on Friday December 21 at St John The Evangelist, Iffley Road, Oxford.

For more information and the purchase tickets visit  https://www.sje-oxford.org/event/maddy-prior-and-the-carnival-band/

Four bands and free entry - DevMas is coming to Devizes!