Lechlade Music Festival organisers have announced the full line line-up for the three-day May event.

Taking place at Riverside Park in Lechlade over the bank holiday weekend from 26 to 28 May, the festival boasts over 100 bands, performers and DJs across four stages.

The diversity of bands confirmed highlights the wide range of music on offer for all ages.

Emerging acts such as Sisteray, J.J. Leone and Dirty Thrills join headliners The Hoosiers, Dr. Feelgood and The Lambrettas.  Organisers have also announced international performers on board, with bands from Los Angeles, Croatia and Berlin and DJs from Venice and Australia.

“Such is the reach of the festival now,” says Festival Director Jennie Rainsford, “We received almost 1000 applications to perform this year, several from outside the UK.  Festivals are highly valued as a great way to reach new audiences.  It enables us to select an increasingly high-quality line-up of fabulous music.

One early aim of setting up the festival was to promote Lechlade as a fabulous place to visit.  We’re delighted the message is reaching overseas!”

Amongst the line-up are several bands from closer to home. Swindon based Felix & The Funk return, as do young singer-songwriters Genevieve Miles and Jade Henderson from Burford.

Lechlade band The Casual Ties will perform to a home crowd and popular Witney band The Standard join the line-up after rave reviews at last year’s event.  Heavy metal band Drogo and The Plucking Different Ukulele Band from Cirencester are also performing.

Local choirs The Cotswold Voices and North Wilts Rock Choir will open the main stage on Saturday and Sunday, with Lechlade’s St. Lawrence School Choir opening the event on the Friday afternoon.

Friday night tribute acts Modraphenia, ABBA Arrival and Not the Rolling Stones will get the party started with an ABBA fancy dress competition and That 80s Rock Show close the festival on Sunday night.  The popular Missy Malone & Friends Burlesque Revue returns on Saturday night.

A new Dance Music Zone will feature over 20 top DJs and the workshop tent will feature young performers from local schools during the evenings after a packed programme of free family workshops during the daytime.

Tickets are selling fast, with live in vehicle pitches nearly sold out.  Find out more on the website at www.lechaldefestival.co.uk.  Keep up to date on Facebook at www.facebook.com/LechladeFestival and on Twitter @LechladeFest 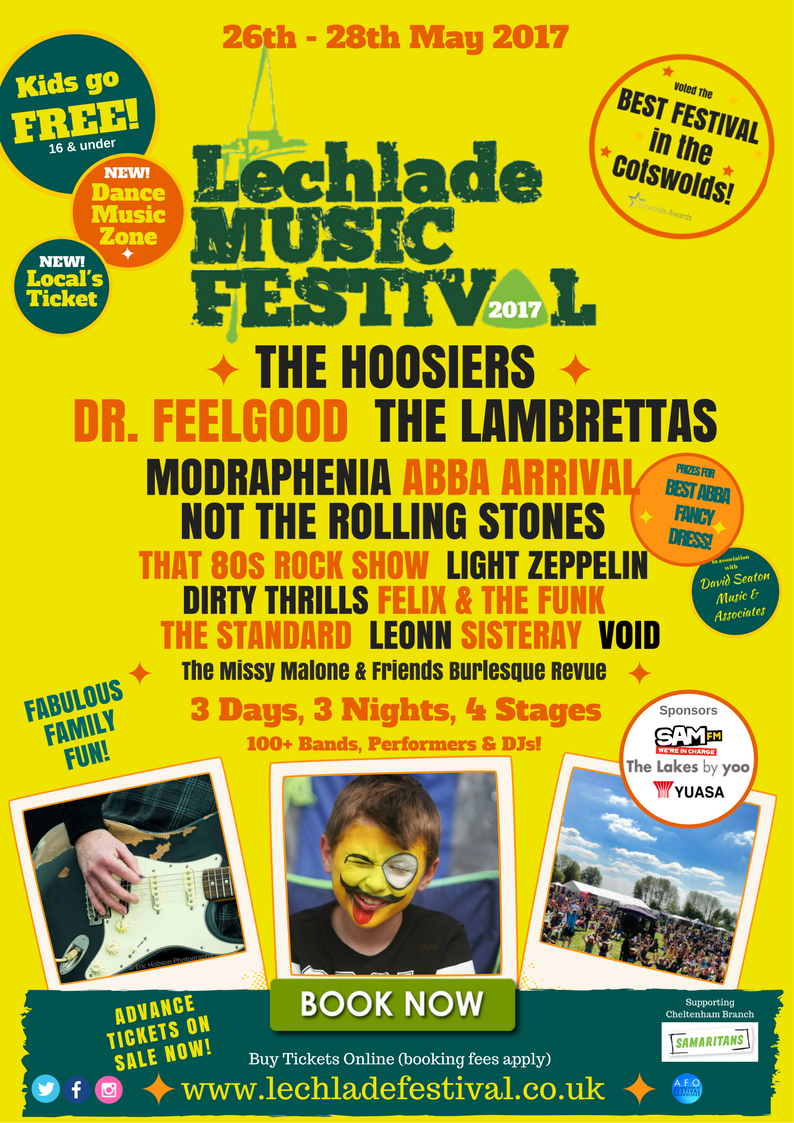 Off the wall style at the Oink Gallery in Old Town