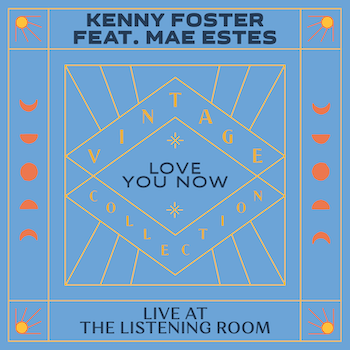 Available To Stream/Download Worldwide; Video Featured On CMT
Kenny Foster and Mae Estes have released a live version and accompanying video of their soaring, feel-good, 90’s-style duet ‘Love You Now’, written by Foster and hit songwriter Kirsti Manna (of Blake Shelton’s “Austin”). After a year of uncertainty where chance encounters were few and far between, this story-style song chronicles a rare run-in with an object of unrequited love, taking the listener on a roller coaster of emotions. The song has been a fan favourite at live shows for some time, and having been featured in many songwriter rounds at The Listening Room in Nashville, TN, the venue was chosen as the location to record the video, released on Friday (15/10) following a premiere on CMT, with a live version of the song available to stream/download now.

The live version of ‘Love You Now’ is the fifth and final track to be featured in Kenny Foster’s Vintage Collection, a collection of previously unreleased songs that could only be heard at live shows. In the absence of touring, Foster decided to release these songs directly to fans so they could enjoy them at home over this last year. Previous Vintage Collection releases include ‘Space’ (August 2021) co-written with Sarah Jane Nelson and produced by Chris Rafetto, featured on Nashville Stripped and Fresh Finds: Country; ‘It Don’t Work Like That’ (May 2021) co-written with Melissa Fuller and produced by David Hodges, appearing on several Spotify playlists including Country Coffeehouse, Nashville Stripped, Fresh Finds: Country, and Young Nashville; ‘Lonely Land’ (Feb 2021) co-written with Mando Saenz and produced by Mitch Dane, which found a home on the Fresh Folk Playlist and the studio version of ‘Love You Now’ (Nov 2020), a duet with Mae Estes and produced with Chris Rafetto, landed a spot on Next From Nashville.

ABOUT KENNY FOSTER:
Kenny Foster is an American Country/Americana Singer-Songwriter who has been steadily gathering critical acclaim, at home and abroad, since the independent release of his first full-length album Deep Cuts in 2017. Named one of Rolling Stone’s “Top 10 Country Artists You Need to Know” and sharing the stage with such diverse acts as Kacey Musgraves, Patty Griffin, Lady A, Maren Morris, Buddy Miller, Old Dominion, Jim Lauderdale, Brothers Osborne, and Lori McKenna, Foster has certainly blazed his own path touring 120,000 miles and 13 different countries in 2019 alone.

Official Site | Instagram | Facebook | Twitter
ABOUT MAE ESTES:
Mae Estes hails from the small town of Hope, Arkansas where she got her start singing the national anthem at rodeos, right before she’d cowboy up and compete in them. She’s been paying her dues in Nashville, working three jobs and playing for anyone who will listen, since 2015. She released her first single ‘Naked’ in 2019 which garnered 100,000 listens and made the Fresh Finds and New Music Nashville playlists. Also in 2019 she performed on the Armed Forces Entertainment tour: “Kenny Foster and Friends” at US Air Force bases in Guam, Singapore, and Diego Garcia. For more information, visit https://www.maeestes.com