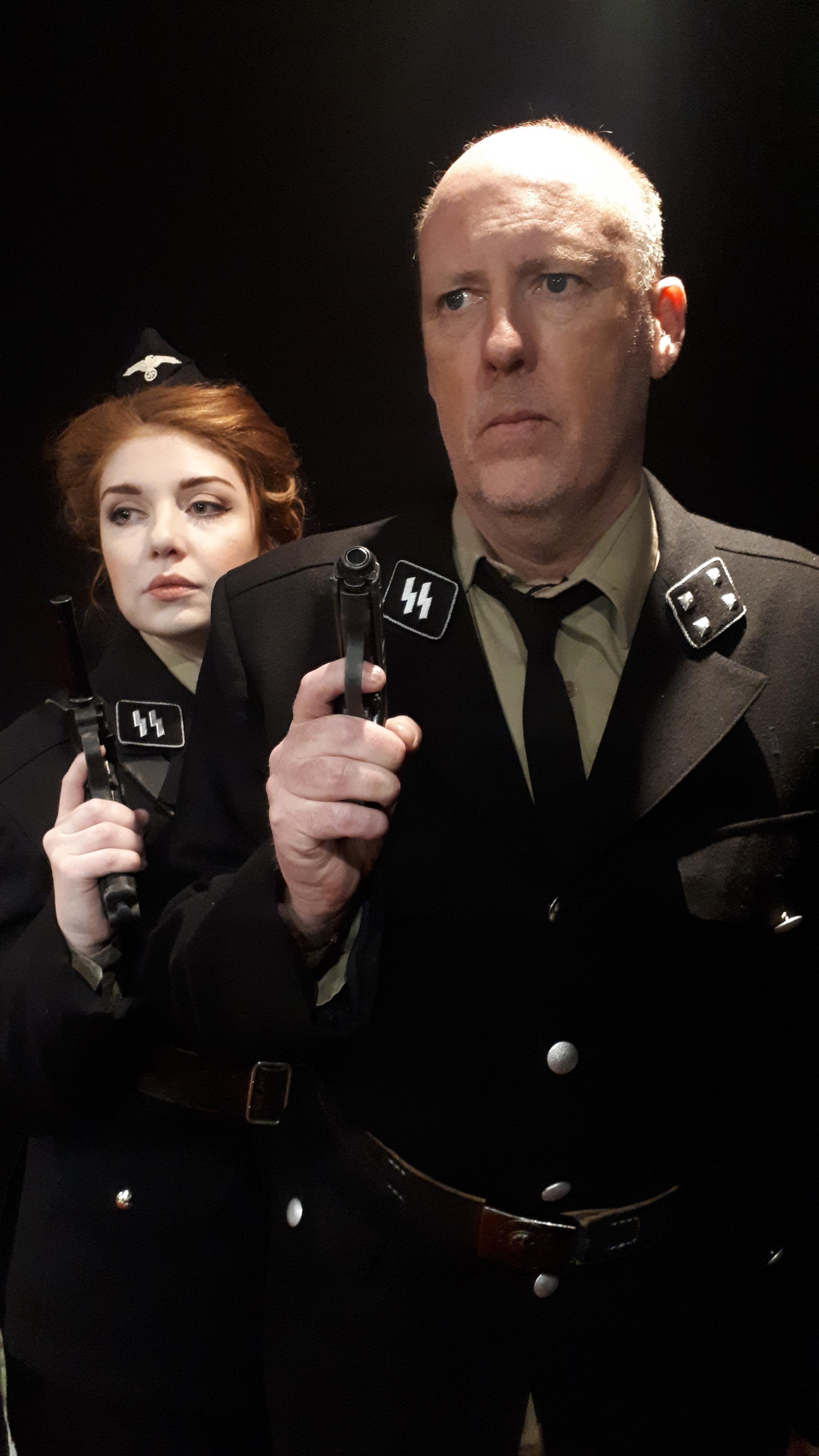 Good and Faithful Servants by Tony Green, is set in an alternative world where Hitler has won the Second World War and Nazi Germany stands triumphant as the conqueror of Europe.

It is 1964 and Berlin SS detectives March (Adam Blake) and Lartner (Alex Jenkins) are hunting a crazed killer who is stalking women in the back streets of the city at the every heart of Hitler’s empire.

Set in the world of the Robert Harris novel Fatherland, this tense police thriller is set in the dark, almost unimaginable world of a victorious Third Reich.

Tony explains, ‘This play was born out of my desire to put on a police ‘procedural’ play.These are actually surprisingly rare and very hard to get right within the confines of the stage. It’s not a ‘whodunit’ by any means, but a journey through a police investigation in an extraordinary setting.

I also wanted to pay tribute to one of my favourite books, Fatherland by Robert Harris and the elements of that story which still fascinate me over 25 years after I first read it. Namely, the work needed to build an effective ‘alternative history’ in which to set the action as well as ensuring that the audience are engaged with central characters who are effectively part of an evil and oppressive system’

This is another world premier from the writer of the successful ADC plays ‘Another Man’s Eden’, ‘Thou Shalt Not Suffer’ and ‘A More Perfect World’ and is another example of Abingdon Drama Club’s commitment to producing compelling drama and never being ones to shy away from a challenge.

This great play, with its excellent ADC cast, delivers a great evening in the theatre. It promises to be fascinating and thought provoking, in equal measure.

An interview with the writer/director Tony Green.
We caught up with Good and Faithful Servants’ director and writer Tony Green during his busy rehearsal schedule.

Why did you want to write a play on such a subject?
This play was born out of my desire to put on a police ‘procedural’ play. These are actually surprisingly rare and very hard to get right within the confines of the stage. It isn’t a ‘whodunit’ by any means but a journey through a police investigation in an extraordinary setting.

Why did you want to direct your own play?

I had a pretty clear way I wanted to see it done. It was easier to do it myself than clumsily try to explain it to others. I also think that, as a writer, it is important to understand the challenges directors face. It makes you better at your own work if you know what limitations you are working within. We learn by doing so to speak.

Are there any characters you can empathise with?

Given most of the characters are in the SS it’s a tricky question to answer. I  wrote the character of Hannah Lartner to reflect the frustrations of a police detective attempting to simply solve a crime while their world is obscured by the fog of political skullduggery. I suppose most of us would find our own jobs easier to do without external elements coming into play so let’s make that my answer.

Was the play easy to cast?
Plays are never easy to cast because whatever vision you might have at the beginning depends on who comes through the door on audition night. This is the big difference between ‘professional’ and amateur theatre. I can’t go out to casting directors with specific demands and do half my work based on photographs and CVs. All the plays I have written for ADC have needed some element of re-write to accommodate this. In this case I changed the sex of one character and created another just based on how people performed in the auditions.

Are there any unusual challenges in this production?
From a practical point of view the variety of locations presented a significant challenge – and also went some way to explaining why police procedural plays are so rare. Moving the action from a cell, to a mortuary, to a flat in pretty quick succession did need some looking at.

In terms of the narrative – there was a lot of work needed to build an effective ‘alternative history’ in which to set the action in terms of set, props and script. There was also the challenge of ensuring that the audience are engaged with central characters who are effectively part of an evil and oppressive system. This was mainly achieved through the performances of my amazing cast.