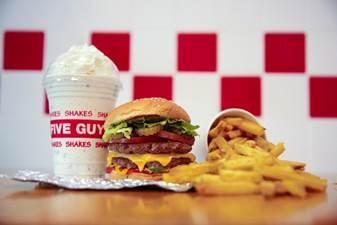 On the 27th January American burger brand Five Guys, famed for its burgers, hot dogs, fries and milkshakes, is to open a new restaurant at McArthurGlen Designer Outlet Swindon.

Founded in Virginia in 1986 and launched into the UK in 2013 in London’s Covent Garden, the restaurant brand has amassed a loyal fanbase - with superstar fans including Ed Sheeran, Adele and former US President Barack Obama.

The new restaurant will be the 101st for the brand in the UK. Situated close to the North Entrance, near the steam train, guests can enjoy freshly made and fully customisable burgers, with the option to choose from as many of the 15 fresh toppings, as well as fries, milkshakes and soft drinks.

Five Guys prides itself on using high quality, fresh produce all prepared and cooked to order. There are no freezers or microwaves in any Five Guys restaurants. Guests will be able to enjoy the 250,000 possible burger order combinations as well as over 1,000 possible ways to customise a milkshake at the new site.

Tina Cumpstey, Centre Manager at McArthurGlen Designer Outlet Swindon commented: ‘We are delighted to welcome renowned restaurant Five Guys to the centre and our local area. We pride ourselves on giving our guests a well-rounded experience in the centre and we are thrilled to be able to further broaden our food and beverage offering’.

Paul Hamilton, Head of Brand at Five Guys commented: “We’re thrilled to be opening the 101st Five Guys store at McArthurGlen Designer Outlet Swindon. We’re sure that after a long day of shopping in the centre, hungry guests will enjoy a delicious burger, fries and milkshake in our store.”

Cheers to the New Theatre beers