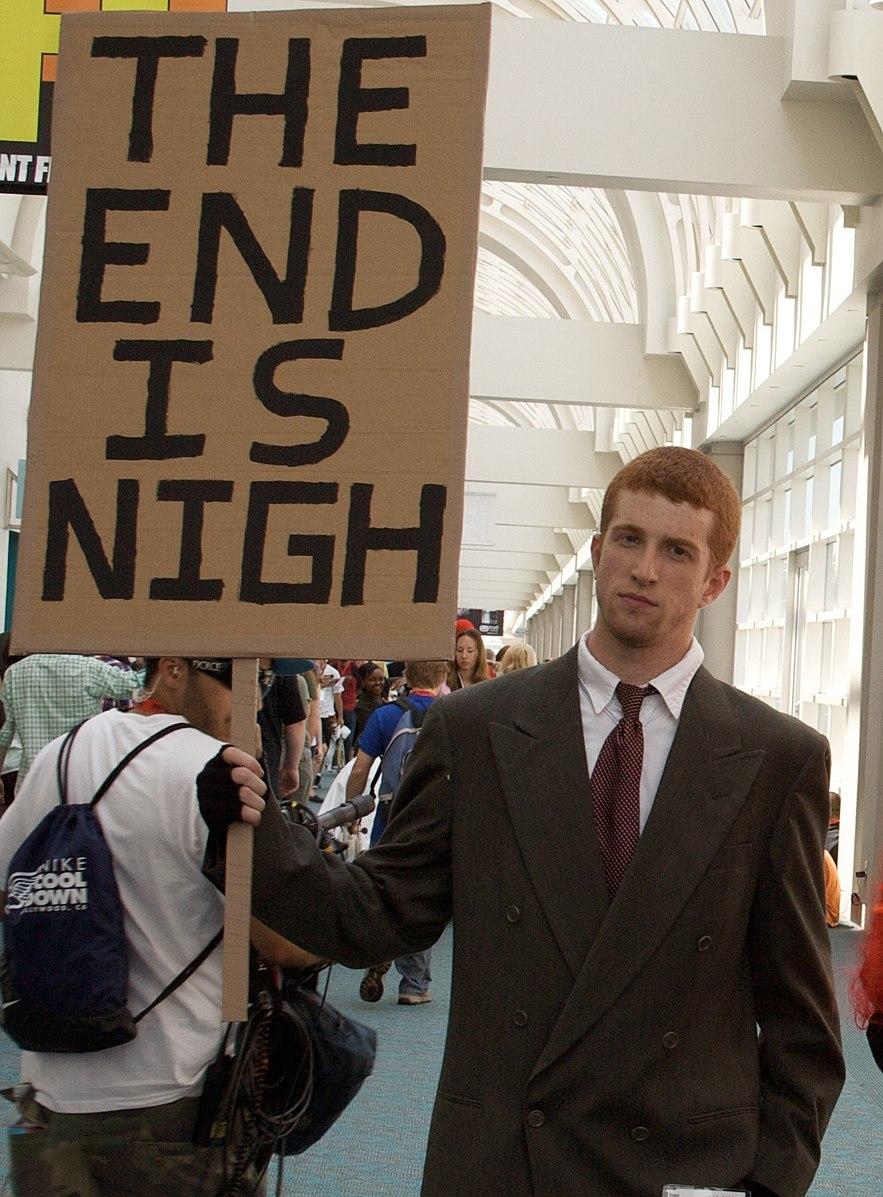 ‘End is Nigh’ sign holder Robin Twelvebush has everything crossed that 2020 will finally be his year.

The South London born 32-year-old financial compliance officer for HSBC in Canary Wharf, has spent every lunchtime for the past ten years walking the streets holding his sign and yelling at passers-by ‘The Rapture is upon us!’.

He said: “I remember back in 2012 getting a bit excited as I thought those Mayans were really onto something but their calculations must have been out by eight years as 2020 is definitely going to be my year.

“Some days I find it hard to contain my smile. The excitement is unbearable. Every time I turn on the news there’s something else as humankind is so obviously in the midst of being smited at the moment what with California on fire, famine in sub-Saharan Africa, war drums going off between East and West, and a global plague forcing everyone to sit at home and watch Homes Under The Hammer.

“It’s probably the continued employment of Piers Morgan that has been the last straw as far as the end of the world is concerned. Just looking at his souless eyes as he spits venom every day is enough to make anyone want the rapture.”

Twelvebush comes from a long line of ‘End is Nigh’ sign-holders. His father, a solicitor from Guildford, spent his entire career wandering the streets of Dorking, where his office was based,

Robin continued: “Every generation of Twelvebushes thinks that it’s going to be their turn and that they will finally get lucky. My father had Y2K which ended up as a damp squib and was active during the eighties when the imminent threat of nuclear apocalypse was just around the corner. But it never happened for him. We all felt so bad for him.

“His father before him had the entire Cold War to get excited about and then his father, my great grandfather, had two world wars and the Spanish Flu to give him hope.

“But maybe, just maybe, it’ll finally happen for me. They will be so proud if it happens. Also I’ll finally be able to look at all those people who doubted me and say ‘I told you so’ - well that’s if I get time before my entire skeleton melts in some kind of apocalyptical fire of doom.

“It’ll probably be nuclear apocalypse as Trump finally goes over the edge but there’s any number of ways it could happen including environmental armageddon. Personally I hope that it’s some kind of ‘apocalypse ex machina’ with aliens invading or something. That would be cool!

“If it doesn’t happen this year - there’s always next year - which has become a bit of a family motto!”

“You know what, I’ll just come back later” says Asteroid ZXB-449 as it decides not to collide with Earth after all