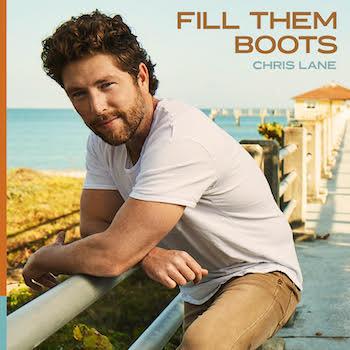 CHRIS LANE IS READY TO “FILL THEM BOOTS”

A nice-guys-finish-first anthem with an endearing strut, “Fill Them Boots,” is penned by Lane with Josh Miller, Ernest Keith Smith and Mark Trussell, and produced by ACM Producer of the Year nominee Joey Moi. Built around a homegrown pickup line and an organic, beats-and-twang flow, it’s a good-natured come-on that’s less about a quick step out, and more about the start of a new journey.

“I wrote ‘Fill Them Boots’ with three of my favorite songwriters in town,” shares Lane. “I had the idea for a long time, and I’m incredibly proud of the way it turned out. It makes me think of how my wife and I first met, so I hope it’s a song people can easily relate to as well. I can’t wait to play it live and hear y’all sing it!”

Listen to “Fill Them Boots” here.

Lane tells the story of a relationship on the rocks in the “Fill Them Boots” music video, filmed on the white sand beaches of Madeira and St. Petersburg, FL. Directed by Justin Clough, the clip follows a young love conflict-of-the-heart to see if the good guy truly gets the girl, and caps off with a shot of a “Lane’s Lawn Care” tee – a throwback nod to Lane’s own former summer job.

“Fill Them Boots” is the exciting first look at anticipated new music from Lane, following his latest PLATINUM-certified smash “Big, Big Plans.” Inspired by his wife, Lauren, “Big, Big Plans” was a multi-week #1 at Country radio, and has amassed nearly 200 MILLION on-demand streams. With more new music on the horizon, he’ll add to a growing list of massive hits including 2X PLATINUM #1 “I Don’t Know About You,” 2X PLATINUM “Take Back Home Girl,” plus PLATINUM hits “For Her” and #1 debut “Fix,” which have contributed to his impressive 1.2 BILLION career on-demand streams.

Lane is set to hit the road with his high-energy live show beginning this summer, before teaming back up with Kane Brown for THE WORLDWIDE BEAUTIFUL TOUR remaining stops in September. Next, Lane is currently gearing up for first-time fatherhood, as he and wife Lauren prepare to add a baby boy to their family this spring.