Belshazzar's Feast to release album for Christmas and celebrate 25 years 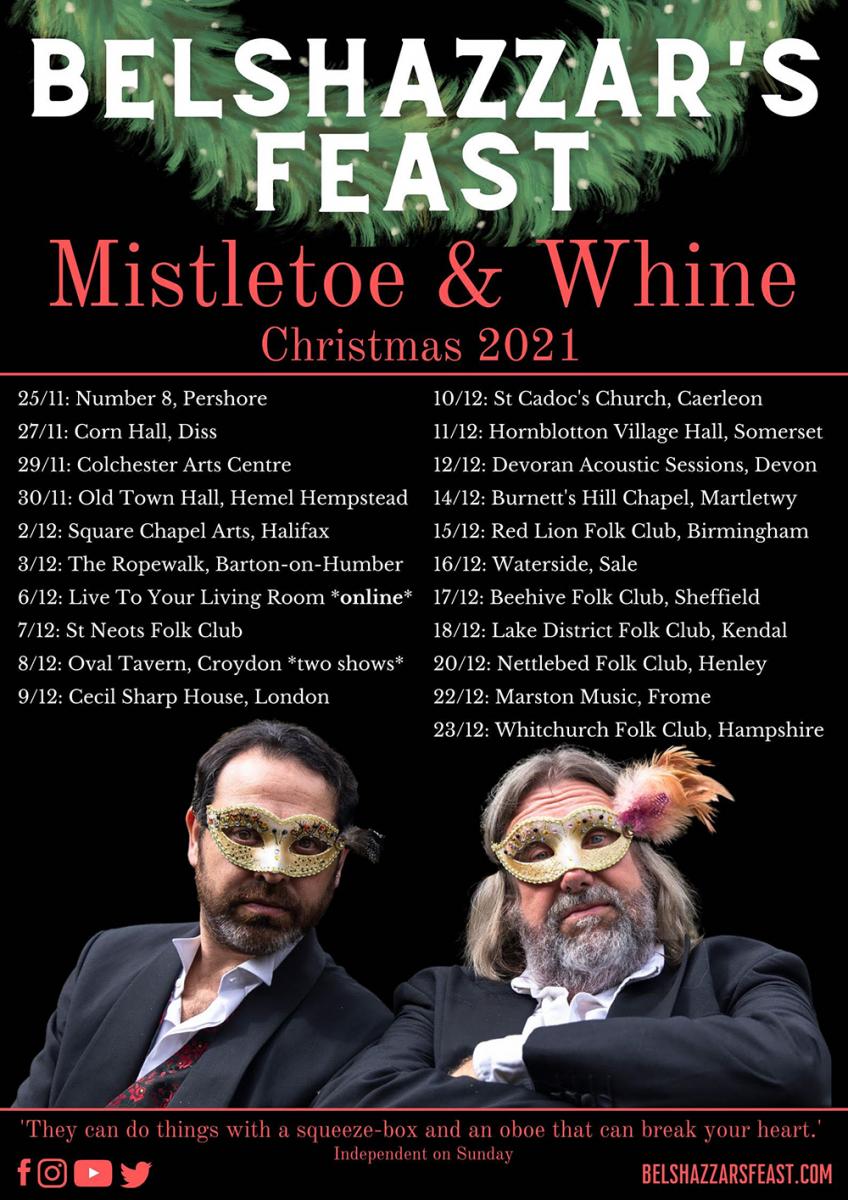 With a new album out in time for their Christmas tour, the wickedly inventive and beloved folk duo are celebrating over 25 years together

Looking back over their career, the CD album will certainly be one to treasure, featuring new music plus fresh arrangements and recordings of the duo’s favourites.

What awaits them is an inspired mix of seasonal carols, songs and tunes (both modern and traditional), which combine to create a heart-warming, beautiful and frequently hilarious evening of music and entertainment.

Acclaimed musicians Paul Sartin (oboe, violin, swanee whistle and vocals) and Paul Hutchinson (accordion) are notorious for their superlative ability, wit, rapport and depth of experience. Together they have entertained audiences across the UK, Australia and beyond with their eclectic and eccentric mix of tunes, songs and humour that sends audiences home with a smile. Belshazzar’s Feast have released nine critically acclaimed albums across their twenty five-year career. Their first winter-themed album, ‘Frost Bites’, earned them a nomination for Best Duo at the BBC Radio 2 Folk Awards.

Their last album, ‘The Whiting’s On The Wall’ is ‘one of the most intimate and entertaining live albums I’ve heard.’ (Songlines)

“Paul Hutchinson and Paul Sartin play like no-one else you’ve ever heard. Their music is breath-taking and wickedly inventive and the between-tunes interchange as intelligent and hilarious as the music. But don’t let me give you the impression they’re a lightweight comedy act: they finish the set with a haunting piece of oboe and accordion magic which has the audience spellbound.” (BBC Radio 2 Mike Harding Show)

“They can do things with a squeeze-box and an oboe that can break your heart.” (Independent on Sunday)

“There is simply no way that two men in faded denim jeans should be this entertaining!” (Downend Folk Club)

“Their intricately arranged instrumentals are a roomful of strangers introducing themselves at a party and getting along fine. You don’t know what’s coming up next and you enjoy the danger… lords of misrule”. (Living Tradition)

More information on the band members:

Bellowhead. Paul is consultant and Director of the Andover Museum Loft Singers and the author of Community Choirs Collection – Folk published by Faber Music. He was a Choral Scholar at Magdalen College, Oxford, then subsequently a Lay Clerk at Christ Church Cathedral, Oxford, and preferred Bass Deputy in Winchester Cathedral Choir.

A BASCA-nominated composer, Paul’s commissions include works for the RSC, Choir of Somerville College, Oxford, Streetwise Opera, Aldeburgh Music, and the BBC Radio 4 series, Playing the Skyline. During 2017 and 2018 he appeared in and directed the music for a new production of Peter Bellamy’s ballad opera, The Transports (Guardian 5*), and composed the music for a number of Shakespeare productions including Cymbeline, King of Britain in 2019 with The Royal Central School of Speech and Drama.

Paul continues to work in education and has gained an MMus with distinction from the University of Newcastle. He is a recipient of a 75th Anniversary Award from the English Folk Dance and Song Society.

Paul studied piano and church organ before taking up the accordion because the local Morris side needed a musician. Cecil Sharp House, Halsway Manor and Benslow Music, various Summer Schools (Dartington, Folkworks, Marlborough) and festivals including The Australia National have all employed Paul as a tutor because of his unique style.

Paul has more than a passing interest in English dance music. Following the publication of his book of 18 th  century dance tunes by Faber Music in 2019, he composed and recorded variations of these tunes with The Maniacs. Reviews of this album likened the sound to both Jethro Tull and Penguin Café Orchestra.