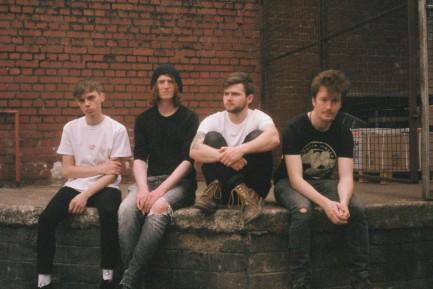 Formed in 2015, the four-piece have developed their sound from a range of different genres, merging emo, grunge and post-hardcore. This has culminated in energic performances in the Bristol and Bath area, supporting bands like Sick Joy, Muskets, Phoxjaw and Beans on Toast.

Back from their self-organised, nationwide tours last year, the band have dropped their latest track ‘Cardboard Box’- an energetic and bouncy track that will spark crowdsurfing, moshing and wholehearted singalongs from fans.

Despite this roaring energy, Squidge say this single has a deeper metaphorical meaning, with reflections of memories and life experiences from their deathbed. This metaphor builds up until the song’s ending, with the last line leaving the listener with a fulfilling, yet somber conclusion.

For fans of Dinosaur Pile-up, Gender Roles and Gnarwolves, you can find Squidge on major streaming services, with the band also appearing on numerous Spotify playlists including: Rocked, The Rock List, Punk Unleashed and Hot New Bands.

Elvis Costello Releases ‘Hey Clockface/How Can You Face Me?’