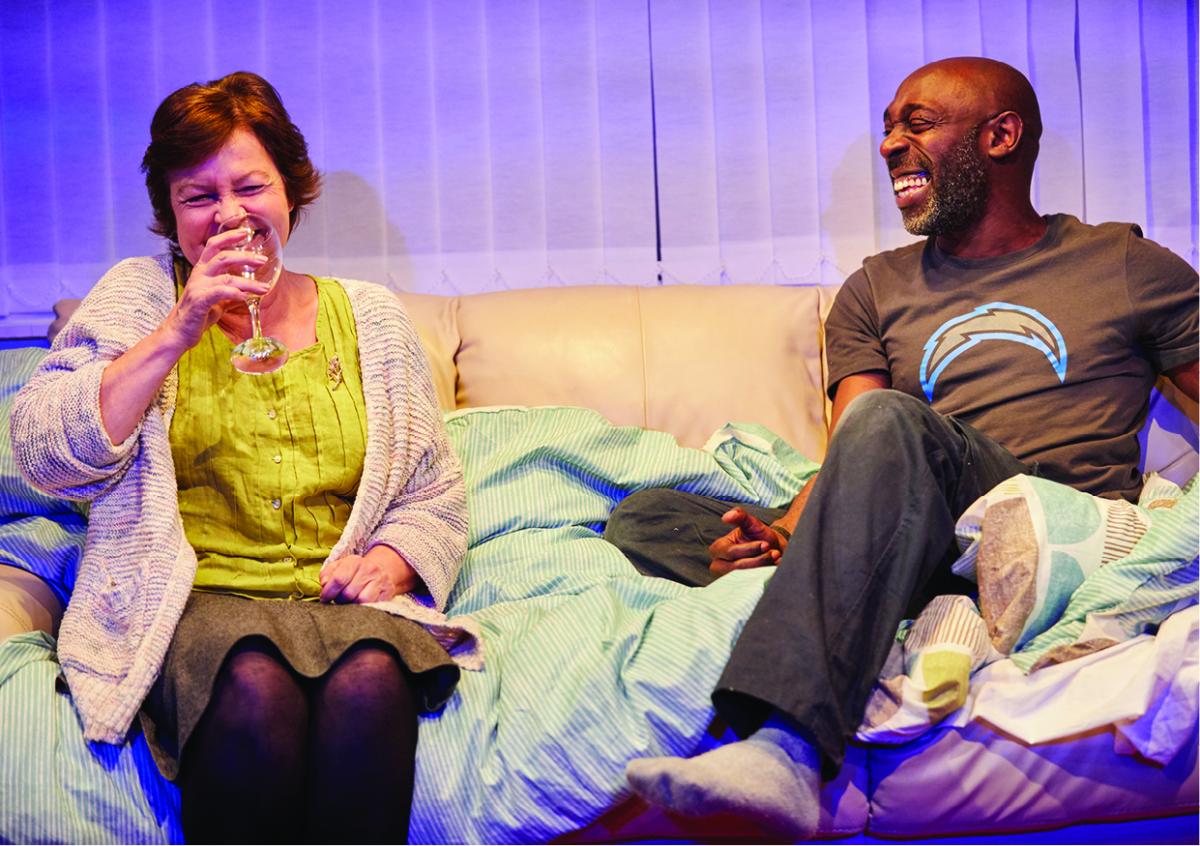 While We’re Here is a new play that will be coming to Oxford’s The North Wall from June 6 to June 8.

And if you look closely you might recognise Tessa Peake-Jones as she played Raquel in Only Fools and Horses for years and also appeared in Grantchester. She plays the main character Carol and she is joined by actor Andrew French who plays Eddie in a story of love that survives through the decades.

The new play is written by Barney Norris and directed by Alice Hamilton.

Co-Directors of the multi award-winning touring company Up In Arms, Barney Norris and Alice Hamilton return to The North Wall following their critically acclaimed production of Visitors, for which Norris won the Critics’ Circle Award for Most Promising Playwright.

His play Nightfall has recently been announced in the opening season of Nicholas Hytner’s new theatre, The Bridge. His debut novel, Five Rivers Met on a Wooded Plain, was released last year and is now a bestseller.

While We’re Here is set in Havant and was developed through research and workshops in the South East.

Eddie and Carol were lovers once, but their lives went in different directions. Now they meet again in a town full of memories, and find something still burns between them. On the country’s southern margin where the towns give way to the English Channel, both search for the centre of their lives.

“Sometimes I think my whole life has been a frightening time. Well. I remember the crunch of the gravel under my feet walking back up the drive, and thinking my life might be over. I might have had all of my fun. But I was wrong, it turned out. I’ve had a lot of good things since.”

On returning to Oxford with While We’re Here, Barney Norris said: “We’ve been developing this new love story over the last few years, and believe we have something important to share with our audiences.

“So much of England is made up of towns like Havant, where people get by, and dream of more, and pass their lives in the leap between their realities and their aspirations. We’ve all felt we live like that at one time or another, I think.

“You’d never know it if you followed the popular media, but that’s what England is, that’s who we are, and this play tries to give voice to that experience.

“There’s a lot of politics in While We’re Here, in among the jokes it’s quite a political piece, but what I’m really moved to say today, as we open our new show, is this: Beauty and The Beast has been the world’s biggest hit twice in my lifetime because right at the top of the show, a girl walks on full of hope and says, ‘there must be more than this provincial life’. And immediately she’s us, she’s speaking for all of us. That’s what we’re trying to say above all with this new play - these are the limits on our lives, and this is how we long to see beyond them.’

Tessa Peake-Jones plays Carol. She is most well-known for playing Raquel in the television series Only Fools and Horses. She returns to the Bush Theatre where she previously appeared in Crossing the Equator. She stars as Mrs Maguire in ITV’s Grantchester, and has had a long and varied career including: Unforgotten (ITV), Marchlands (ITV), Doctor Who (BBC) and Legacy (BBC). Her recent stage credits include: Beacons (Park Theatre), Home (Arcola), Brimstone and Treacle (Arcola), The Five Wives of Maurice Pinder (National Theatre), The Park (Pit Theatre/RSC), Hamlet, A Comedy of Errors (RSC).

Barney Norris (playwright) is a critically acclaimed writer and the co-artistic director of Up in Arms. Previous work at the Bush Theatre includes The Rest of Your Life and Visitors, for which he won the Critics’ Circle and Off West End Most Promising Playwright Awards. Further plays include Fear of Music (National Tour/ Out of Joint), At First Sight (National Tour/ Latitude Festival) and the critically acclaimed Eventide (Arcola Theatre). Further published works include To Bodies Gone: The Theatre of Peter Gill and the bestselling novel Five Rivers Met on a Wooded Plain. He has two other productions opening this spring; Echo’s End (Salisbury Playhouse) and a revival of Every You Every Me (Oxford Playhouse/ Reading Rep).

The ground breaking centre, built on top of the St Edward School’s former indoor pool, operates on a number of levels. A vibrant, purpose-built home for the School’s drama and dance activities, it has, since 2007, been open to the public as an innovative arts venue for Oxford and beyond. With a deliberate emphasis on offering alternatives to the mainstream, the dazzling and eclectic public programme attracts over 20,000 visitors a year to more than 100 performances and exhibitions.

Alongside its programming, The North Wall embraces the School’s mission to educate and inspire – by producing new plays; by programming work by early-career arts professionals; and by hosting free, residential arts placements for young people from all over the country.